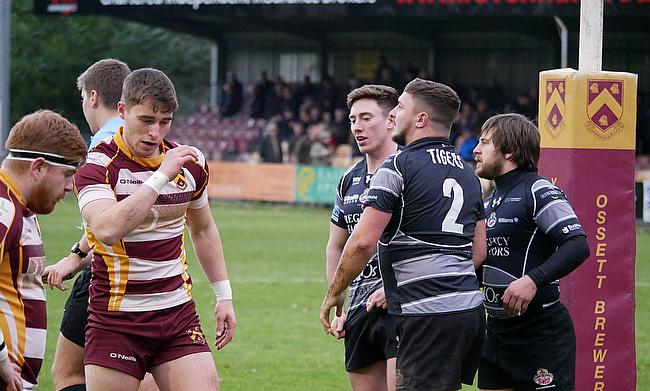 With the final stretch of the National Two North season now upon us, there is still so much to be decided at both ends of the table as we prepare for a fascinating conclusion.

At the top, Sale FC are seemingly heading towards the title and a victory over Chester in Round 27 would push them closer to automatic promotion to National One while the race for a top two finish continues to hot up as Sedgley Park and Tynedale are now the frontrunners for the silver medal spot.

Both Sedge and Tyne have home games this weekend with the latter hosting relegation threatened Luctonians, who are just one of a number of teams battling for survival.

Along with the Lucts, Sheffield will need to pull off a remarkable escape if they are to avoid an immediate return to National Three and they take on Leicester Lions this weekend hoping to spark a revival. Elsewhere, Wharfedale will be aiming to move out of the bottom three when they travel to South Leicester while Blaydon’s fate is now in their own hands as they go to Sheffield Tigers in search of another crucial win.

Also this weekend, Hinckley and Stourbridge meet at Leicester Road aiming to begin April on a positive note and Macclesfield entertain Otley.

It is another Cheshire derby this weekend for league leaders Sale FC and if it is anything like the last quarter of their clash with Macclesfield last Saturday, then the Manchester based-club will take another step towards automatic promotion to National One. Jonathan Keep’s side showed their class over the Easter weekend as a superb final 20 minutes in Macc saw them clinch their 18th straight victory and considering Sedgley Park had briefly knocked them off top spot, a 37-0 win at Priory Park was the perfect response.

Sale FC vs @RUFCChester is the second to last game at Heywood Road this season. Get along and watch the best rugby in the area KO3pm. @jack_moorhouse will be starting on the wing for his 201st game. Team Sheet will be up shortly. #onesalefc #SalevsChester Who’s going? pic.twitter.com/4OptefGlSv

With five games left in their season, the National Two North title is in their own hands, but looking to halt their pursuit will be Chester. The visitors to Heywood Road are going through their best spell of the season as six wins in their last eight matches has put them in a strong position to finish in the top six this term. Currently, the men from Hare Lane are two points off sixth placed Huddersfield, but if they are to continue putting pressure on Field, they will have to become the first side to beat Sale at Heywood Road in the league for 21 matches.

For just under two days, Sedgley Park sat at the summit of National Two North. A battling win over Wharfedale last Thursday evening saw Matt Bebbington’s side move top, but it was short lived as Sale FC provided an empathic response. Sedge’s win in Yorkshire showed that the race for automatic promotion is not a foregone conclusion, but more importantly, it highlighted their strength as they aim for the play-off spot.

It is now 10 wins from their last 11 matches for Sedge and aiming to trip them up this weekend will be Huddersfield. Gareth Lewis’ side are having a wonderful campaign on their return to National Two North and a current standing of sixth place highlights the season which Field are having. They travel to Park Lane – where Sedge have lost just once this term – on the back of three straight wins which is the best form Huddersfield have shown since November. The men from Lockwood Park have a top six finish in their sights and that would be a superb achievement come the end of the season.

Tynedale have really clicked into gear when it has mattered most. Scott Lawson’s men have picked up four wins from their last five fixtures which has moved them right into the hunt for a top two finish. The northeast outfit are eight points off second placed Sedge, but they now have a game in hand after their fixture with Sheffield was postponed on Easter Saturday. In their final five matches of this season, the men from Corbridge face three sides all fighting off relegation starting with this weekend’s clash against Luctonians.

The boys are again making the long haul to the North East this weekend, when they take on Tynedale RFC. “We did very well against Tynedale at home and only lost in the last play of the game. We are better against the… https://t.co/EXbVMHlODN

Last Saturday was a major blow to Luctonians’ survival hopes. A chastening 30-0 loss to rivals Blaydon leaves Ryan Watkins’ side 10 points adrift of safety with two games in hand. It is far from over for the Lucs who have a few games still to come against teams around them, but a positive result against a team bang in-form this weekend were certainly boost morale at the start of a pivotal month for the Herefordshire side.

During the last six weeks, both Hinckley and Stourbridge have seen their top two ambitions fade away. For Stour, defeats to Tynedale and Sale FC dented their aspirations but a loss to Sheffield Tigers at Stourton Park in March leaves their hopes of a play-off place hanging by a thread. Neil Mitchell’s side had recovered from a minor blip in November to catapult themselves back into the mix, but with four games to go, they are now 10 points behind second placed Sedgley Park. Victory over South Leicester last time out was a good response by Stour and they will be aiming to build on that when they travel to Hinckley.

As for the hosts, they will just be desperate to recapture their early season form. Heading into 2018, the Hornets were in second spot but five defeats from their last nine games, including a loss to relegation threatened Luctonians in Round 26, has seen them drop down to fifth in the table. In terms of the bigger picture, this has still been an excellent campaign for Hinckley considering this is their second year at this level, but they will be keen to end this term on the front foot after a tough few months.

With the top seven all in action against one another this weekend, South Leicester have the chance to gain some ground on the teams above them as well consolidating their position in the top half of the division. Victory over Luctonians in the middle of March was much needed for the men from Welford Road, but back to back defeats leaves their place in the top eight under threat. Nearest challengers Macclesfield are just a point behind with a game in hand so just a second win in 10 matches would be another welcome boost for the Midlands club.

Wharfedale watched on as Blaydon comfortably beat Luctonians last week which meant the Yorkshire side slipped into the bottom three. A defeat against second placed Sedgley Park last Thursday means Dale are now two points off safety with four games remaining in their season. However, positive displays against the aforementioned Sedge and league leaders Sale FC over the last two weeks is encouraging for the Yorkshire club and if they can translate those performances into their final fixtures of the term then Dale may well drag themselves to safety.

Macclesfield interim head coach Marshall Gadd has said this week that their 37-0 defeat against Sale FC flattered the league leaders. The Blues were beaten over the Easter period, but now Gadd has called for his side to get ‘back to business’ this Saturday. The Cheshire outfit have certainly improved since his appointment with Macc winning eight of their last 12 matches which has seen them move away from the relegation battle and up to ninth in the table. The men from Priory Park now have their sights set on a top eight finish, which would be a brilliant achievement considering where they were four months ago.

They host Otley this weekend and the Yorkshire side are still not safe from the drop just yet. A huge victory against South Leicester last Saturday moved them 11 points clear of the relegation places and with Director of Rugby Peter Clegg targeting two wins from their final five matches before their win over South, another victory at Macclesfield in Round 27 could secure their status in this division for another year.

Leicester Lions will be aiming for a response when they host Sheffield at TMDP Park this weekend. Andy Key’s side were thumped by Chester over the Easter period as their inconsistent season continued in Cheshire. The Lions have steadied the ship since Key’s return to the club, but with the final month of the campaign now upon us, they will want to end a tough season on a positive note.

They host a struggling Sheffield side this weekend who will be desperate for a victory in the Midlands. The division’s bottom club are 12 points from safety with five games left to play in the season which means regardless of results elsewhere; the Yorkshire outfit cannot be relegated in Round 27. The men from Abbeydale Road weren’t in action last Saturday due to a postponement against Tynedale, but they must improve on one win in five if they are to avoid an immediate relegation to the fifth tier.

This week, Sheffield Tigers’ twitter feed stated that the Yorkshire club are “not quite safe yet” as they prepare for this home clash with Blaydon. Jamie Broadley’s side sit 12 points clear of the drop and two wins from their last four matches has saved them from being embroiled in a relegation dogfight. After beginning this campaign superbly, it has been a season of two halves for the Tigers who went on a nine matches winless run between November and January, but they know a victory at Dore Moor this Saturday could secure their place in this division for a third consecutive season.

While the hosts edge closer to confirmed safety, Blaydon are still battling hard to stay in National Two North. They were given a huge boost over the Easter period as a stunning 30-0 win over rivals Luctonians lifted Matt Thompson’s side out of the bottom three and two points clear of the drop. The Crows now have their fate in their own hands and with fixtures against teams currently in the top half to come, this weekend’s clash against Sheffield Tigers could be the perfect opportunity to pick up some more vital points.