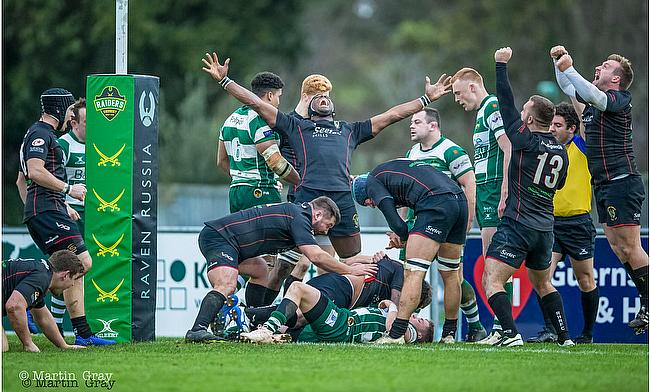 Graham Pratt admits it has been a rollercoaster of an adventure for Rochford Hundred over the last three seasons and feels the Essex club ‘deserved’ to gain promotion to the National Leagues. Photo Credit: (Martin Gray)

Pratt, who is now 1st XV manager at Rochford following a successful playing career with the club, saw his beloved side create history this term as they secured a place in the fourth-tier of English rugby.

When the London and SE Premier season was suspended back in March due to Covid-19, Rochford were second and level on points with Guernsey, but the men from Hawkwell were crowned champions thanks to the RFU’s ‘best playing record’ formula.

In an interview with ncarugby.com, Pratt said: “Yes, I think on the balance of it, we probably did deserve to go up and finish top.

“We did beat Guernsey home and away and beat Wimbledon at home who were also challenging us. We only lost to them by two points away as well!

“We also conceded the least amount of points (274) in the league. We didn’t have the highest points scoring record as that went to Guernsey because they were a lot more adventurous in the way they played and knocked up some very big scores. Having said that, they probably weighed up the four games we had left and we had three home games and one away and the chances were, we would have picked up positive results in all of those.

“Although we did lose to Wimbledon and CS Stags 1863 this season, we did pick up maximum bonus-points on both occasions so that probably also helped our cause.”

Promotion for Rochford has continued their remarkable rise over the last three years. After competing in London 2 North East for five successive seasons, the club moved into London 1 but it was a brief stay on this occasion.

The Essex outfit won all 26 of their matches on their way to clinching the title in 2018/19 and this term, they continued their staggering run of form.

Since the beginning of the 2017/18 campaign, Rochford have won 68 of their 70 matches and Pratt has been delighted with the club’s evolution.

He added: “Going back to the 2017/18 season when we were in London 2 North East, fortunes changed when Chris Green [current Director of Rugby] joined us from Southend.

“He brought some boys with him and it gave us something to build on. We went on to storm that league and win every game and in London 1 the next season, we did exactly the same! We added a few more players, not just from Southend, but from some other clubs as well and we had a very talented squad which were playing well together. We just carried on the work in London and SE Premier.”

After jumping between London 1 and London 2 North East, Rochford knew they needed to make aspects of the club, as Pratt puts it, ‘more professional’ if they were going to build for the future.

Green’s decision to become Director of Rugby provided a springboard for Rochford, which included bringing in new players and the introduction of a contract system.

“We were getting to a stage where we had to get much more professional in the way we did things,” said Pratt.

Back to back bonus point wins for @RochfordRugby
in rounds 11 and 12 as they looked to get back towards the top of the table in the race to get to @Nat2RugbySouth @TalkRugbyUnion pic.twitter.com/NP46HcJgBU

“We had to set up a contract system for our players and we had some money coming in from our now vice-chairman and ex-1st XV player Wayne Seaby, who owns a big company down here. He encouraged Chris to come over because he wasn’t happy in Southend and we started to set up the contract system that season.

“Because we got the promotion in 2017/18, we played well and the team gelled well together which created a great camaraderie in the squad. Things started to blossom.

“Everyone at the club all played their part getting things sorted and the following year, because we had the success of going up into London 1, we started branching out in terms of recruitment.

“The squad just got stronger and stronger and the whole ethos changed. We had a good mindset and we stuck to it. We had a few ups and downs, but everyone went for the one goal which was promotion.

“If you want to keep moving, you have got to have a structure in place and you have got to work for the same goal. We had a really strong squad this year which helped us achieve our aims.”

Rochford are now looking forward to their maiden campaign in National Two South and when rugby does return, the club will come up against some old and some new faces.

The Essex outfit will renew acquaintances with the likes of Bury St Edmunds as well as local rivals Westcliff and after clocking up the miles in London and SE Premier, Pratt is excited by the challenge of next season.

“Coming up from London 1 to London and SE Premier, one of the factors was the extra travelling.” Pratt added “Some clubs I knew from the past, but some of the clubs I’d never been to before so it was good to visit them.

“Coming up to National Two South now, that probably applies even more because we will be travelling a lot more now!

“We have faced a few of the teams before who are in National Two South and of course, we have our old friends Westcliff as a local derby as they are only up the road from us. We will be back facing Guernsey as well! There are few clubs in there that I have played against in the past so it should be very, very interesting. I am really looking forward to the challenge.”