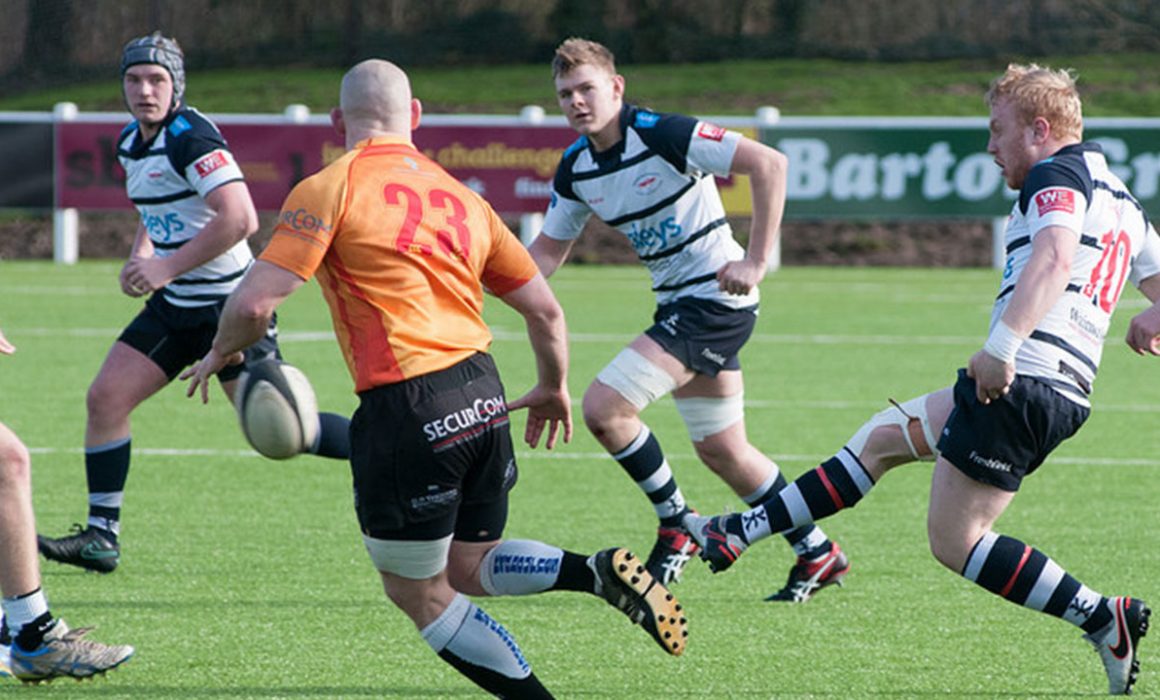 Promotion battles and relegation fights once again grabbed the headlines in the National Leagues in Round 24 as the twists and turns continued at this crucial stage of the season.

In National One, the title will be going to Hartpury College but they will have to wait an extra week to be crowned champions as the league leaders survived a scare against Rosslyn Park, but they were able to maintain their unbeaten record this term.

At the wrong end of the table, the relegation candidates all suffered defeats but Blaydon did snatch a losing bonus-point against Coventry which could make the difference come the end of the campaign.

Caldy and Sale FC continued their quests towards a top two finish in National Two North as both secured convincing victories over Sheffield Tigers and Scunthorpe respectively.

Sheffield Tigers and Scunthorpe both remain in the bottom three alongside Preston Grasshoppers who squandered a 17-point lead against Luctonians as they fell to a damaging defeat at Lightfoot Green.

In National Two South, Chinnor took a huge step towards finishing in the promotion spots as they edged out rivals Old Elthamians while it was business as usual for league leaders Bishop’s Stortford.

The relegation battled intensified further in this division as Barnstaple and Worthing Raiders both jumped out of the bottom three thanks to crucial victories while London Irish Wild Geese and Barnes fell into the drop zone.

Hartpury College’s unbeaten run this season looked as though it was going to be ended on Saturday by Rosslyn Park.

The London-based side (who had won eight of their last nine games heading into this fixture) led 25-19 just before the hour, but Hartpury’s Ben Vellacott crossed twice in the final quarter of this match to seal College’s 24th consecutive victory of the season.

John Barnes’ men did have the chance to seal the title in Round 24, but they now know that just two points from their next fixture against Old Albanian will be enough for them to be crowned champions of National One.

Second placed Plymouth Albion stayed on course for the silver medal spot as they comfortably beat relegation threatened Hull Ionians 26-7 at Brickfields. That victory was Albion’s seventh in a row while Hull Ionians remain inside the bottom two.

Their relegation rivals Blaydon also suffered a defeat in Round 24 as they were beaten 25-19 by Coventry who secured just their third away win for the campaign. The losing bonus-point for Mickey Ward’s side moves them two points clear of the drop with six games of the season remaining.

Bottom of the table Macclesfield are now 20 points adrift of safety after a 48-12 defeat away at Darlington Mowden Park. The Blues’ fate is almost sealed but Giles Heagerty’s side will continue to battle until the bitter end.

Elsewhere in National One, Esher secured their first away victory of the season as they beat Cambridge 36-22 at Volac Park. Both sides are looking to distance themselves from danger, but two late tries secured a huge win for the Surrey-based side.

Other results in National One saw third place Ampthill and District seal a hard-fought 43-24 win over an improving Fylde side while James Shanahan beat his new employers as his Old Albanian side clinched a 36-10 win against Blackheath.

Luctonians moved themselves further away from danger in National Two North as they came back from 17 points down to beat relegation threatened Preston Grasshoppers at Lightfoot Green.

The hosts had taken a 17-0 lead thanks to a score from Tom Hurst and a Penalty Try as well as two penalties from Lewis Allen. However, the Lucts rang the changes in the second period and turned the game on its head as tries from Frank Kelly and Stefan Psota, either side of an Allen penalty, brought the visitors back into this contest.

Alex Davidson’s men then closed the gap further as Joe White claimed their third try of the afternoon, but Allen relieved the pressure once again with his fourth penalty to leave Hoppers 23-19 up heading into the final stages.

Question marks were raised why Allen and his side hadn’t kicked to the corner and in hindsight it was unfortunately the wrong decision for Garth Dew’s side as Jordan Street snatched the victory for the Lucts right at the death with their bonus-point try.

The defeat for Preston leaves them 11 points from safety and they face a must win game this coming Saturday when they travel to bottom of table Sheffield Tigers.

The Yorkshire side are 13 points from safety after suffering a 41-7 defeat to league leaders Caldy while fellow relegation rivals Scunthorpe were hammered 61-7 by second placed Sale FC. The aforementioned top two sides in this division continue to make no mistake at this crucial time in the season.

Elsewhere in National Two North, Sedgley Park moved into third place thanks to a 36-27 win over Leicester Lions while Chester continued their recent good form with a comprehensive 31-0 victory against Stourbridge.

Other results saw Dan Taylor inspire Tynedale to yet another away triumph as the north-east side beat Hinckley 19-15 while South Leicester beat Otley 34-19 and Wharfedale’s revival continued with an excellent 17-3 win against rivals Harrogate.

Chinnor held on to clinch a 34-31 away win against promotion rivals Old Elthamians as Matt Williams’ side took a huge step towards a top two finish in National Two South.

Tries from Henry Lamont (2), CJ Osazuwa, Greg Goodfellow and Ali Bone as well as 14 points from the boot of Jonny Bentley was enough for the Black and Whites to seal a vital victory.

The table toppers produced a professional and ruthless display at home to London Irish Wild Geese as they secured a 53-3 win. Victories for relegation threatened Barnstaple and Worthing Raiders also meant that this defeat for Wild Geese saw them drop into the bottom three.

Barnstaple secured a vital 10-3 home victory over Barnes despite being down to 14-men for more than an hour of this contest. Ollie Mason was red-carded, but some valiant defensive work coupled with a score from Linford Brock means Barum are two points clear of the drop.

Worthing Raiders are also out of the relegation zone but only on ‘Games Won’ after a stunning victory over Taunton Titans. Their 36-33 win saw the Raiders clinch their second victory in three matches and now the men from Roundstone Lane head into this weekend’s crucial match with London Irish Wild Geese with momentum firmly behind them.

Bottom of the table Exmouth are still only 10 points from safety after securing two bonus points in their 33-28 defeat to Bury St Edmunds. This was Bury’s first win in seven matches and it leaves Gavin Hogg’s side six points clear of the drop.

Elsewhere in National Two South, Redruth returned to winning ways with a 29-18 win over Canterbury while there were away wins for Redingensians and Henley Hawks. The Rams made it five victories on the spin with an excellent 25-12 triumph against Cinderford while the Hawks sealed just their third win on the road as they narrowly beat Clifton 29-27.