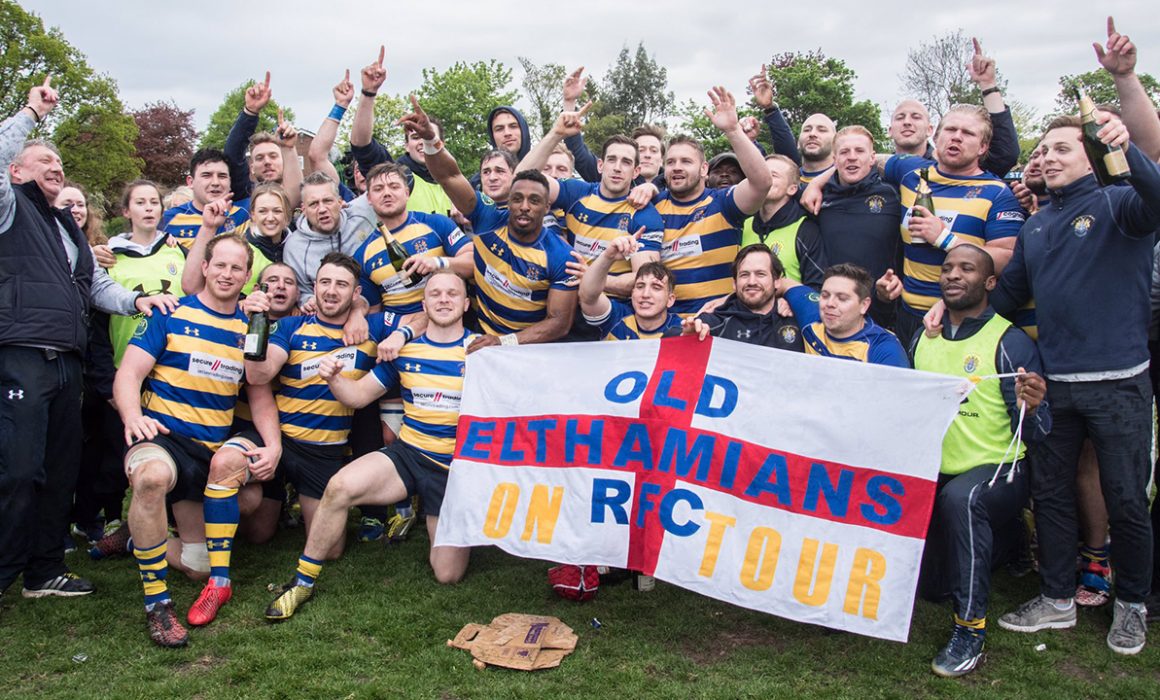 Old Elthamians have been promoted to National One for the first time in their history following a 19-14 victory in the National Two play-off against Sale FC. Chris Heal takes a look back at the events from Heywood Road.

A contrast in emotions was there for all to see at the final whistle.

As usual in any play-off or cup final match, there is the sense of joy and bitter disappointment in close proximity and it was Old Elthamians who had the smiles on their faces.

“We are massively elated,” said Sam Howard, who along with Gavin Lach, have guided OEs to promotion to National One.

‘Massively elated.’ That sums OEs’ season and their journey to the third tier of English rugby very well, but that is only scratching the surface of what they have achieved over the last seven years.

In truth, both OEs and their opponents Sale FC have had unbelievable seasons and both can be proud of the progress they have made over the last 12 months, but this was a day that belonged to the men from College Meadows and a day where they created a new piece of club history.

Following OEs victory over Barnstaple in the final round of the regular season last weekend, they booked their place in the play-off against Sale.

The hosts had known they would be competing for a place in National One for just over a month after victory over Sedgley Park, but their performance levels never waived as they ended the season strongly.

It was a different story for OEs. Their mission to the play-off was in their own hands for the final five games. Collect five bonus-point wins and they would be travelling to Heywood Road and with the pressure on, they delivered in style.

Forget the fact that they had an ‘easier’ run in on paper than Chinnor, OEs did what they had to do and were rampant in the process, scoring 315 points in five matches.

While the spotlight was on OEs and Chinnor to see which side would clinch that play-off spot from National Two South, Sale FC were producing some strong displays and in some quarters, they were considered favourites heading into the play-off.

Whether this was because Jonathan Keep’s men had been pretty much imperious at home all season or collected more points than OEs I am not sure, but if there was a favourites tag leading up to the game, it was firmly ripped off by the National Two South side.

“We are delighted and relieved as much as much of anything,” Howard told TRU after a match that was worthy of a place in National One. “The boys have put in so much this year and it means so much to this club.”

Saturday also saw the final round of Premiership action taking place, but arguably this was equally as good in terms of sporting drama.

Howard and Lach’s side were composed with the ball and defensively resolute without it which coupled together, helped them over the finish line in a game which could have gone either way.

There were nerves on show right from the off and the swagger which both sides had and been playing with over the last few months took a back seat.

Flashes of individual guile from Huw Thomas and Scott Rawlings gave a crowd of over 1,000 something to get excited about, but it was the travelling OEs supporters who let out the first cheer as the ever present Tom White broke the deadlock with a penalty.

The game was being played at a frantic pace and it was the speed of Sam Stelmaszek that nearly fashioned the first try, but OEs held firm in defence. Both sides were watertight but the visitors were able to extend their lead as White was on target with his second penalty of the afternoon.

But their lead was swiftly cancelled out. White’s opposite number, Liam McGovern, continued his superb season as two solid strikes from the tee levelled the game up heading into half-time.

OEs were determined not to go into the changing rooms without the lead. It was not a case of missing clear-cut opportunities in the first-half, it was about capitalising on them and a break by the in-form Dom Lespierre was halted by a high-tackle from Stelmaszek which resulted in a penalty try and a trip to the sin-bin for the Sale back.

First blood to OEs, but Sale kept on the coattails of their visitors as Chris Johnson landed a drop-goal to reduce OEs lead to 13-9 at the break.

There seemed to be no change in approach by either side after the interval with the game still firmly in the balance. The only thing that differed was the tempo of the match as it turned more into a war of attrition with the prize of a place in National One now within touching distance.

The intensity levels were still high and White was able  to give the OEs some breathing space as he landed his third penalty of the day.

And it was White who ultimately won the match for the visitors a minute from the end. OEs’ longest serving player kept his nerve to slot over a drop-goal to extend their lead to 10 points as the clock ticked towards red.

Sale did hit back in the dying embers as Paolo Odogwu scooted over but for the hosts, who had dominated the ball in the second period,  it was simply too little, too late.

They will certainly come back stronger next year, but a place in National One will be Old Elthamians’ for the 2017/18 season. A club that seven years ago was in the fifth tier are now set for another chapter in their remarkable rise.