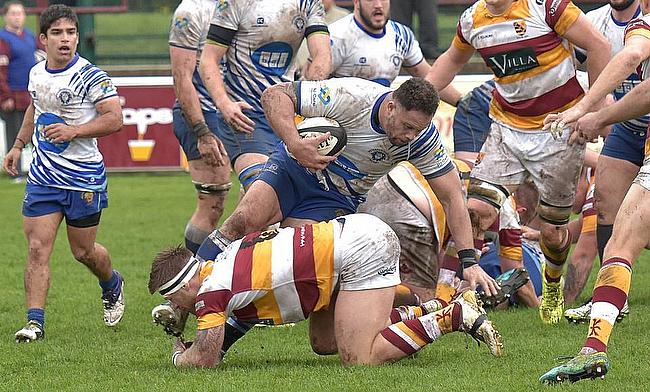 Peterborough Lions held on for a vital win over relegation rivals Macclesfield in National Two North to enhance their survival chances.

Victory at Bretton Woods was the Lions’ second triumph of the term and both they and Macc sit 12 points from safety as things stand.

Leicester Lions have now joined them in the bottom three after losing out to Tynedale, but also because their near neighbours South Leicester stunned promotion chasing Huddersfield to pick up their first win for two months.

The aforementioned Field have lost a small amount of ground in the promotion race as Hinckley leapfrogged them into third spot following a comfortable win over Preston Grasshoppers while second placed Chester suffered their first home defeat of the season against Fylde.

With Chester losing, league leaders Hull Ionians are now nine points clear at the top of National Two North, but they were made to work hard for their latest victory over Otley.

Hull Ionians moved nine points clear at the top of National Two North after an entertaining bonus-point win over Otley.

Ben Stephenson and Adam Thomas scored first-half tries for the hosts, but Otley struck through Alexander Beamount and Adam Malthouse (2) to lead by seven points at the break.

Sam Wilson’s try enabled the I’s to level up the scores shortly after the interval and Ben Carlile’s effort, as well as a Lewis Minikin penalty, in the final 10 minutes sealed an eighth consecutive victory for the table toppers.

Chester lost ground in the National Two North title race as the accuracy of Greg Smith’s boot helped Fylde become the first visiting side to win at Hare Lane for 11 months.

The victory for the Lancashire club means they are now seven points off second placed Chester as three successive victories has sparked their campaign back into life.

A try from Ralph Dowds had put the away side in front, but George Baxter’s effort made the scores level at the break.

But the second half belonged to Smith, who landed three penalties to help Fylde over the line in Cheshire.

Hinckley made it four straight wins at Leicester Road as they strolled to victory over Preston Grasshoppers.

The Midlands club were in control at half-time as Joe Glover, Luke Coltman and Callum Dacey all touched down while Joe Wilson kicked 10 points from the tee.

After the break, further tries from Tom Wheatcroft, James Martin and Gareth Turner saw Hinckley race to victory before Glover notched his second score to complete the win.

Hoppers’ only points came in the first period and Oliver Tripper’s try had actually given the away side a 5-3 lead, but it was short lived as Hinckley stormed to a victory.

South Leicester’s winless run of six matches came to an end in Round 12 as they edged past Huddersfield following a thrilling victory at Welford Road.

Huddersfield were 22-15 in front just after half-time, but tries from Rob Turner and Javiah Pohe, as well as two penalties from the impressive Ben Palmer, proved to be enough for South who secured their first victory since the end of September.

A hard fought victory for South sees us back to winning ways.

All the best for the rest of the season ??

The hosts had led by one point at the interval thanks to tries from Matthew Cooke, Michael Ogunwole and Palmer, with Kian Stewart and Joe Green responding for Field.

The aforementioned Stewart completed his hat-trick after the break, but South were able to clinch the win which has moved them out of the relegation places.

Stourbridge ended a run of three straight defeats as a hat-trick from Mark Harrison helped the Midlands club to a bonus-point win over Sedgley Park.

Harrison and Jack Lea scored tries inside the first 25 minutes, but backs Rob Holloway and Jamie Harrison replied for Sedge.

Harrison’s second saw the home side go into the break with a five-point lead, but that was wiped out after the restart as Liam Canning crossed for the visitors.

Stour hit back as tries from Harrison and James Seabrook, either side of Steve Collins penalty, put them 33-24 in front.

Collins then went over for Sedge to reduce the arrears, but a 76th minute penalty from Chris Scott clinched a welcome win for Neil Mitchell’s side.

Sheffield Tigers produced a superb comeback as they beat Wharfedale at the Avenue.

Dale were helped into a 19-0 lead thanks to a brace from Harry Bullough and a score by Josh Burridge.

However, the Tigers roared into life before the break as Thomas Hart and Jamie Broadley both crossed to cut the deficit to five points.

The away side briefly went ahead after half-time as Kain Rix dotted down, but Wharfedale responded six minutes later through Ken Houghton.

However, the final quarter belonged to Sheffield Tigers as Broadley completed his hat-trick to extend his side’s unbeaten run to three matches.

Tynedale ran home five tries as they sealed a bonus-point win over Leicester Lions, which leaves them 10 points clear of the relegation places.

Guy Pike went over for Tyne’s first try, but they did fall behind as Sam Benjamin and Alex Wilcockson both crossed for Leicester Lions.

The hosts moved back in front following Pike’s second and Morgan Passman’s effort, however, the Lions responded yet again as Edward Sumpter’s try tied the game up.

But that was as good as it got for the away side as David Batey’s try on the stroke of half-time was added to by Passman in the second period while Rob Parker also landed a penalty to complete a third win in four matches for Tynedale.

Two tries in the second-half proved to be the difference as Peterborough Lions secured a potentially crucial victory over relegation rivals Macclesfield.

Locks Christian Edbrooke and Thomas Lewis both dotted down to put the Lions in front with 11 minutes left to play and the hosts were able to hold out for just their second victory of the season.

Both Peterborough Lions and Macclesfield are now 12 points from safety heading into December as the division’s bottom clubs prepare for what could be a vital festive period in their respective bids to avoid the drop.