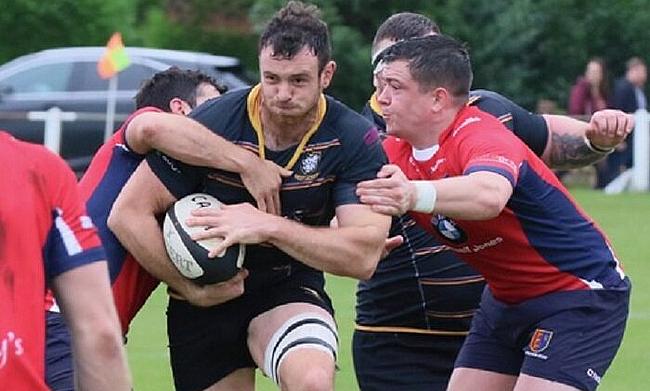 Table toppers Stour are the only side with maximum points to their name as they comfortably beat Luctonians whilst second-placed Caldy defeated Chester on Sunday afternoon to continue their positive return to the fourth tier.

Meanwhile, Sedgley Park sealed back to back victories following their triumph over Wharfedale and Sheffield Tigers snatched a late win at Scunthorpe.

Newly promoted Hull are also unbeaten as they clinched their first victory back in National Two North against Tynedale whilst Huddersfield are still yet to taste that winning or losing feeling after settling for a second draw of the campaign at Otley.

It was also honours even in the Lancashire derby between Fylde and Preston Grasshoppers whilst Loughborough Students’ season is up and running after beating Hinckley.

Stourbridge roared to their second victory of the new season as they swatted aside Luctonians at Mortimer Park.

The Lucts flew out of the blocks as Michael Cheasley and Francis Kelly both crossed inside the first 12 minutes, but a brace from Joe Heatley and score via Joe Collingham put Stour 19-12 in front.

Seb Robinson-Hall hit back for the hosts to level the game on 49 minutes, but Jack Lea, Dan Rundle, George Morgan and Afeafe Haisila all crossed as Stour surged to back-to-back wins.

Caldy made it two wins out of two as they triumphed over Chester at Paton Field.

Gavin Roberts kicked two penalties, before Sean Green crossed for Chester but it was the hosts that held a slender advantage at half-time.

The Full time score is 18-10 to @CaldyRUFC . No points today for Chester but a great afternoon of rugby for all involved https://t.co/vWj2FHL3Hu

Chester did have the final say as Harrison Vare touched down, but it is now two straight defeats for last year’s National Two North runners-up.

Sedgley Park built on last week’s solid win over Preston Grasshoppers with a battling victory against Wharfedale at Park Lane.

A week on from Scott Barrow’s first win in charge of the Tigers, the new head coach saw his take the lead in this contest after only four minutes as Sam Peet touched down.

Steve Collins pinged over a penalty on the stroke of half-time for the hosts and Peet grabbed his second try after the interval to keep Sedge on the front foot.

For Wharfedale, they had to wait until the final five minutes to trouble the scoreboard as Ralph Wellock’s effort was swiftly followed by a penalty try, but it was too little too late for the Greens as Sedge held on for the win.

Sheffield Tigers secured their second win on trot as they defeated Scunthorpe thanks to a late score from Henri Packard.

Fifteen points from Will Robinson and try from Jacob Hardy helped Scunthorpe into a 20-10 lead at the break, with Pete Swatkins going over for the Tigers after Mark Ireland’s penalty.

The away side were able to edge ahead with 11 minutes remaining as Ryan Holmes and Ireland both crossed, but the drama then unfolded.

Oliver Cole hit back for Scunthorpe to give the Greens a three-point lead, however, the Tigers would have the last say as Packard’s late effort snatched the victory for the Yorkshire outfit.

Ryan Carlson scored a late converted try in this Lancashire derby as Preston Grasshoppers came from behind to draw with rivals Fylde.

A strong crowd at Woodlands watched Fylde earn a 17-10 lead at half-time thanks to tries from Scott Rawlings and Ben Gregory, whilst Matt Lamprey dotted down for Preston against his old club.

Hoppers’ Sam Stott and Noah Miller were both shown yellow-cards either side of Tom Grimes’ score as Fylde moved 14 points clear, but the visitors fought back.

Ben Dorrington forced his way over and when it looked as though the match was heading for a Fylde win, Carlson touched down to rescue a share of the spoils for Preston.

After an excellent beginning to the contest from Tyne – which included tries from Guy Pike and Ben Bell (2) – Stephen Johnson and Keane Naylor both scored to help Hull into a 17-15 lead at the break.

A penalty try extended the hosts’ lead before Pike’s second kept Tyne in touch, but another score for Johnson and Ali Heard’s try put Hull in control with a quarter of the game remaining.

Tyne’s Joe Richards did score late on, but Hull held their nerve to maintain their positive start to life back in the fourth tier.

Loughborough Students responded emphatically to their opening day defeat against Stourbridge by comfortably beating Hinckley in Round Two.

Harding’s second score just three minutes after the restart kept the Students in the ascendency while further tries via Austin Wallis and Will Kaye wrapped up a convincing victory.

Alex Tansley grabbed his second try in as many weeks for Hinckley, but the Hornets were outplayed in this all-Midlands affair.

The result means both teams are still searching for their first victories of the season after Otley lost to Wharfedale in Round One whilst this was Field’s second stalemate in a row.

FT: Spoils shared in a competitive Yorkshire Derby, thanks to everyone who made the journey over. We go again next week against Sedgley at Lockwood Park. C’mon Field!

Ben Smith and Will Milner exchanged penalties in a tight first half, but it was first blood to the visitors after the break as Elliot Knight scooted over.

Field still held a two-point lead after Adam Malthouse claimed Otley’s opening score of the afternoon, but Lewis Bradley’s effort on 62 minutes made it 15-8 to the away side.

However, his unconverted score allowed Otley to rescue a draw as Beaumont came off the bench to dot down with nine minutes remaining.