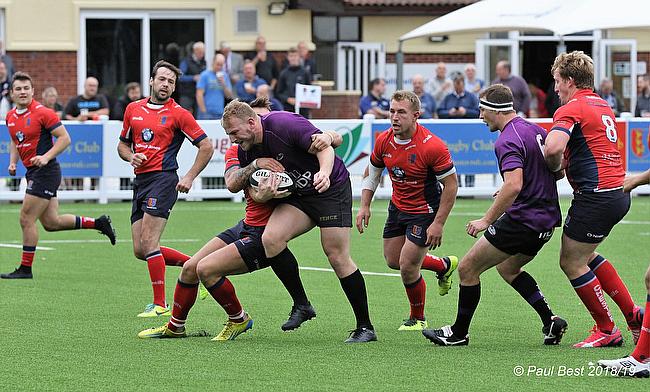 Chester’s ambitions for a top two finish suffered a slight setback in Round 17 as Leicester Lions defeated the second-placed side in National Two North.

Jan van Deventer’s men are now six points behind league leaders Hull Ionians, who beat Peterborough Lions on the weekend, but Chester are only three points clear of their fellow promotion hopefuls.

Third-placed Fylde continued their impressive form as they battled to a victory over Macclesfield while a rare away win for Hinckley and a hard-fought victory for Huddersfield has kept them in the hunt.

Down at the bottom, South Leicester secured a morale-boosting win over Sheffield Tigers which leaves them eight points from safety while elsewhere, there were triumphs for Otley and Tynedale who beat Sedgley Park and Stourbridge, respectively.

Hull Ionians were able to move six points clear at the summit of National Two North after defeating a spirited Peterborough Lions outfit, who had Suva Maasi sent-off.

Lewis Minikin landed a penalty for the league leaders before Sam Wilson raced over to score Hull’s first try.

Peterborough, who currently sit bottom of the division, were then reduced to 14-men on 22 minutes as centre Maasi was shown a red-card and they were immediately punished when Ed Falkingham dotted down.

However, despite being a man light, the Lions sparked into life and tries from Jack Askham and Thomas Gulland made the score 17-12 after 50 minutes.

Minikin and Ben Young exchanged penalties, but even though they were able to stay in touch, the hosts failed to add to their tally. Instead, Hull Ionians made sure of the victory when replacement Ben Whyte crossed late on.

Leicester Lions defeated Chester at TMDP Park to clinch their third win in a row and dent the visitors’ promotion bid.

The Lions are still 10 points clear of the relegation places after this win, while Chester are now only three points ahead of the chasing pack as they look to keep hold of second spot in National Two North.

Chester led 12-7 at half-time, thanks to tries from Adam King and Tom Foden.

Oliver Taylor had crossed for the hosts in the first period and the Lions took the lead after the break as Harry Key’s penalty was followed up by a converted score from Devon Constant.

Alick Croft responded immediately for Chester as the visitors went in front on 59 minutes, but a try from Sam Benjamin and another penalty from Key completed the victory.

Fylde prevailed in a pulsating eight-try contest against Macclesfield to move to within three points of the promotion places.

The visitors took a seven-point lead into the break, with Tom Carleton (2) and Oli Parkinson both scoring.

Sam Moss and Sam Broster had crossed for Macc in an encouraging first half display and the hosts were able to level the scores at 21-21 when Dafydd Rees went over after the restart.

But the drama unfolded in the final 10 minutes. Connor Wilkinson and Ollie Longmore exchanged converted tries, but Fylde would have the final say as a late penalty from Greg Smith snatched the win for Warren Spragg’s side, who extended their unbeaten run to eight matches.

Hinckley secured their first away win since September by beating Wharfedale at the Avenue.

A penalty try, plus scores from Jamie Skerrit and Callum Dacey, helped the visitors into a 19-15 half-time lead, with Harry Bullough and Joe Altham crossing for Wharfedale.

Dale did go over again via George Hedgley, but it was merely a consolation.

Huddersfield begun the New Year with a tight victory over Preston Grasshoppers, which leaves the Yorkshire outfit seven points off the top two places with a game in hand.

A try from Lewis Workman and Chris Johnson’s drop-goal put Field 8-0 up.

Tyler Spence ran in for Hoppers and Johnson landed a penalty before the hosts took the lead following Matt Crow’s effort.

Tries from Alex Battye and Kian Stewart, either side of a third Johnson penalty, put Huddersfield back in front and despite Matt Lamprey’s late effort, the away side held on for an excellent victory at Lightfoot Green.

The visitors led 9-5 at the break thanks to the boot of Steve Collins, while Otley’s Paul Petchey scored the only try of the first period.

Home scrum-half Harry Skelton and Will Lees exchanged scores after the interval, but a try and penalty from Rowntree put Otley ahead.

The pendulum swung back and forth after the hour. Rowntree’s second try was bookended by Sedge scores from Matt Riley and Ben Black as the away side held a one-point advantage.

However, on 75 minutes, Rowntree’s influence on this contest continued as he landed a penalty to clinch the win for Otley.

Tynedale secured an excellent bonus-point victory over Stourbridge to begin 2019 in a positive fashion.

Fly-half Rob Parker scored 20 points as the home side ran in four tries at Corbridge. Joe Richards, Jonathan Burden, Guy Pike and Chris Wearmouth all crossed for the hosts, who are now 11 points clear of the drop zone with a game in hand.

Stefan Thorp, Mark Harrison, Hal Riley (2) and Nick Cairns claimed tries for Stour, but their away day woes continued in the North-East.

South Leicester picked up just their second win since September as they came from behind to triumph over Sheffield Tigers at Dore Moor.

In a first half of three tries, Jamie Broadley and Pete Swatkins crossed for the hosts only after Jonathan Hughes had given South an early lead.

I have to say a big thank you to @SheffTigersRUFC and @SouthRfc for a brilliant game of rugby today in @nat2rugbynorth running rugby, both teams wanting to play open rugby at pace. Good luck for the rest of the season! Definitely reminded why I love to referee today @KYBOEngland

But, it was the aforementioned Palmer who steered his side to victory. Two further penalties in the final quarter secured a welcome win for the Midlands club and they are now eight points adrift of safety.