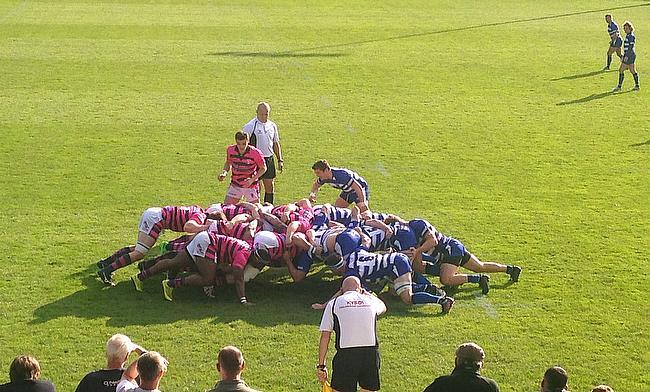 Sale FC will be aiming to inflict a second defeat of the season on league leaders Stourbridge when the men from Heywood Road visit Stourton Park this weekend.

The National Two North table toppers fell to their first loss of the campaign in Round 10 as they were beaten by Sheffield Tigers and Sale will be looking to repeat that same outcome tomorrow.

Stour are currently nine points clear of fifth placed Sale and their lead at the top is now seven points, so the likes of Tynedale, Hinckley and Sedgley Park will be  hoping to gain more ground on Neil Mitchell’s side when they take on Macclesfield, Otley and Chester in Round 11.

Top of the table Stourbridge will be hoping to bounce back immediately from their first defeat of the season. Neil Mitchell’s side were overturned by Sheffield Tigers last weekend which ended Stour’s run of nine consecutive victories and cut their lead at the summit to seven points. The Midlands side are still firmly in control of the promotion race, but they will face a tough examination of their credentials tomorrow when Sale FC visit Stourton Park.

Sale are probably not the ideal opponents for Stour to take on after their maiden loss of the campaign. The men from Heywood Road take the trip to the Midlands on the back of three straight wins and the fifth placed side are only two points outside the top two. Sale have gone about their business very efficiently in recent weeks and the play-off finalists of six months ago are starting to crank up the pressure. The Manchester-based club have won seven times this term, but only one of those victories as come on their travels so they will be aiming to double that tally this weekend and inflict another defeat on the league leaders.

With Stourbridge dropping points last weekend, victory over Sheffield was a double boost for Tynedale. Scott Lawson’s men had entered November having lost back to back games against Hinckley and South Leicester, but they put a halt to that mini blip in Round 10 which was crucial because all the sides directly below Tyne also clinched wins. Now, the northeast club head to Cheshire this Saturday looking to close the gap further on Stourbridge, but they will also want to remain in the promotion places.

In 2015, both Macclesfield and Tynedale were relegated from National One. Macc enjoyed an immediate promotion back to the third tier while Tyne struggled in National Two North, but two years on, the tables seemed to have turned. Macc currently sit 12th in the division and they are only two points clear of the relegation zone as we enter the second-third of the campaign. The Blues have been hit with a few injuries, but just three wins from 10 matches is very unfamiliar feeling for Giles Heagerty’s men at this level. They were outplayed by Hinckley last Saturday so Heagerty and Macc will be itching for a response at Priory Park tomorrow.

Hinckley’s season continues to get better and better. A comprehensive win over Macclesfield last weekend was their sixth straight home victory of the campaign which leaves the Midlands club in the top three and level on points with Tynedale. Geoge Chuter’s first 10 games at Leicester Road have delivered eight wins and Hinckley are certainly starting to turn heads in National Two North.

Next on the agenda for them is a trip to Otley. Hinckley have won just twice on the road so far this term, but their hosts are currently suffering from contrasting fortunes. While Hinckley seem to be brushing opponents aside, Otley are winless in seven matches – a run which stretches back to September 16th. Peter Clegg’s side are in the bottom three as things stand, but a victory against Hinckley at Cross Green this weekend would be a welcome result ahead of the first break in the season.

Following a patchy end to September, Matthew Bebbington must be pleased with the way his Sedgley Park side have performed since the first month of the season. The Tigers enter Round 11 having won four of their last five games which leaves them just one point behind Tynedale and Hinckley in the table and their next fixture to negotiate is against Chester.

Sedge are once again looking good for a promotion challenge, but a visit to Hare Lane hasn’t been straightforward for visiting teams so far this season. Chester have won all four of their matches on home turf and it is in Cheshire where they seem to spark into life. Last week, Nick Joseph’s men suffered yet another away loss at Leicester Lions, but their form on the road takes a back seat this weekend as the 10th placed side aim for their fourth win from their last five matches.

South Leicester had to work extremely hard last weekend, but they were able to come out on top against Otley to seal yet another victory at Welford Road. The win for South was their fifth at home so far this season, but now the Midlands outfit will want to gain some positive consistency in their results. A patchy run as seen Michael Holford’s side fall away from the front-runners slightly and it is away from home where they need to improve.

South have lost their last two matches on their travels, but they may fancy their chances of ending this mini blip when they go to Luctonians. Ryan Watkins’ side currently sit one place and one point above the relegation zone following a humbling defeat at Sale FC last weekend. The Lucts have now lost their last five matches which prompted Watkins to say this week, that his side need to ‘instil the club’s identity back’ into their performances. The Herefordshire side will be eager to put an end to their slide down the table and a first win since September would be the perfect start.

Leicester Lions travel to Blaydon this weekend aiming to continue their impressive recent form. Considering the Lions had a miserable start to the campaign, it has been quite the turnaround by Jack Heald’s men who take the trip to the northeast having won five of their last six matches. The Midlands side are now up to seventh in the table and they will want to enter the first break of the season on a high.

A side desperate to do just that are Blaydon. Back to back wins in October against Wharfedale and Chester could have been the catalyst for Ally Hogg’s side to really kick start their season, but the Crows have failed to build on those victories. Blaydon come into Round 11 on the back of two away defeats at Sheffield and Huddersfield so they will be happy to return to Crow Trees, which is where their last victory came. The northeast outfit currently sit 11th in the table, but three points ahead of the drop zone, so a home win against one of the form teams in the division would certainly boost morale.

Last weekend, I suspect there were many followers of National Two North who were stunned to see the scoreline at Dore Moor at half-time. Sheffield Tigers had delivered a superb display in the first period against an undefeated Stourbridge and the Yorkshire side never relinquished their advantage for the reminder of the contest as they beat the league leaders and secured their fourth win on the spin.

It has been an encouraging month for the Tigers and they will be quietly confident of extending their excellent sequence of results when they take the short trip to the Avenue to face Wharfedale tomorrow. While Sheffield Tigers maintained their position in the top half last week, Dale fell to their ninth defeat of the season, which leaves James Doherty’s side eight points adrift of safety. The division’s bottom club did show some spirit in their defeat at Sedgley Park last week, but they will need to produce a really strong display this Saturday if they are to clinch their first home win of the campaign.

Huddersfield take the trip to Sheffield this weekend looking to continue their very solid start to life back in National Two North. Gareth Lewis’ men must be satisfied with their performances in the opening 10 rounds as Field sit ninth in the table as thigs stand. The Yorkshire outfit have maintained their excellent home form from their promotion winning season as all four of their victories so far this term have come at Lockwood Park.

Next for Huddersfield is a trip to Sheffield where they will be aiming to break their duck on the road. However, the hosts are back at Abbeydale Road which was the setting for their first win of the season in Round Nine. Victory over Blaydon was much needed for Sheff, but they were unable to add to that away at Tynedale last Saturday. Granted, Corbridge is not an easy place to go and get a result so Sheffield will be hoping to secure back to back home victories this weekend when they take on a fellow promoted side.