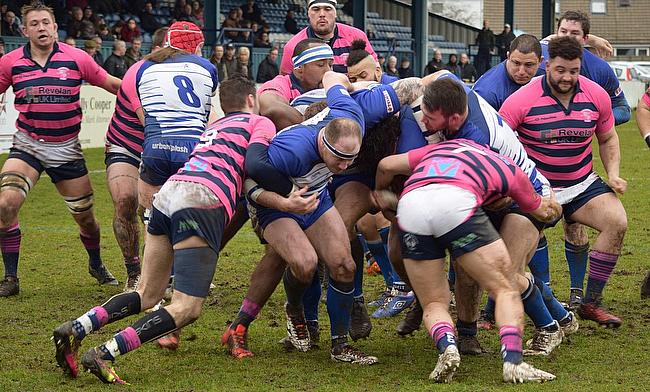 Sale FC have one final hurdle to overcome as they aim to clinch the National Two North title when they visit Leicester Lions this weekend.

Jonathan Keep’s side are currently one point clear at the summit and they also have a game in hand so a win in the Midlands on Saturday would seal promotion and the championship for the men from Heywood Road.

Second placed Sedgley Park take on Sheffield Tigers in Round 30 and they can still win the title, but it would take  a catastrophic collapse by Sale if they were to steal top spot.

While the automatic promotion place is yet to be decided, the fight for survival is still on going in National Two North.

Luctonians, Blaydon, Wharfedale and even the aforementioned Leicester Lions are still battling for safety as we head into the final scheduled weekend of the term. The Lions require just a point from their final two games to stay in this division, while Luctonians have to avoid defeat against Sheffield this Saturday if they are to take advantage of their two games in hand which they have at the start of May.

For Wharfedale and Blaydon, the equation is clearer. Dale are currently safe and are one point clear of Blaydon so if they match or better the result of Matt Thompson’s side, then they will avoid relegation. Failure to do so could see Blaydon escape the drop.

Sale FC are closing in on another piece of history. After coming so close to promotion to National One just under 12 months ago, Jonathan Keep’s side are on the verge of the third tier this time around. The men from Heywood Road have risen to the challenge and now they require just a victory from their visit to Leicester Lions on Saturday and they will be crowned National Two North champions.

Two years ago, they were scrapping for their lives to stay in this division and now they could be waving goodbye for the right reasons. 21 successive victories has led Sale to this position and out to spoil the party this weekend will be Leicester Lions. Mathematically, Andy Key’s side are still not safe but it would take a brave person to bet against the Lions staying in this league. The Midlands club have two games left to play and need just one point from their final fixtures to confirm their place in this division for another year.

A team that has racked up 21 straight victories could easily have secured the title by now, but Sedgley Park have continually denied Sale FC of that opportunity. As Sale repeatedly churn out the wins, Sedge match them and heading into Round 30, there is still the possibility that Matt Bebbington’s side can win National Two North. As things stand, Sedge are one point behind Sale, but the league leaders have a game in hand so it would take an astonishing collapse from the table toppers to let Sedge snatch the championship crown.

Realistically for Sedge, the focus is on building momentum towards the National Two play-off match which will be against Chinnor. The men from Park Lane have certainly maintained their rhythm since the turn of the year and they come into this fixture with Sheffield Tigers having won 13 of their last 14 matches. As for the visitors, they confirmed their safety in this division for a second year on the spin following a solid win over Leicester Lions last weekend and a victory in Manchester on Saturday could see them end the campaign in 10th place.

Tynedale’s hopes of finishing in second place came to a conclusion last weekend following their late defeat at home to Wharfedale. The loss for Scott Lawson’s men ended their chances of potentially sneaking into the play-off place and now Tyne’s attention will be focused on securing the bronze medal. Overall, it has been a campaign full of positives for the north-east side and they could well be eyeing another promotion push next season as they look to make a return to National One.

They end the season away at Chester and this will be the hosts’ last match of the campaign despite having two fixtures left to play. Their game in hand against South Leicester at the start of May has been void, so the Cheshire outfit know that only a win against Tynedale this weekend could see them leapfrog Huddersfield into the top six. If they don’t achieve that, Chester will still be pleased with their progress this season, especially in the second half of the campaign, and a 12th triumph from 14 home matches would be a good way to end the term.

Stourbridge welcome Otley to Stourton Park for their final game of a rollercoaster campaign. For large chunks of this season, Neil Mitchell’s men looked like they would end the term in a top two spot, but mini-blips in form during the year hampered their chances of another shot at National One. All in all, it has still been a very strong season for Stour who could still finish in third place.

A 12th home win this weekend combined with a Tynedale defeat could see them steal the bronze medal spot, but Otley will travel to the Midlands aiming to end the campaign on the front foot. After securing their status in this division for another year following a victory over Sheffield in Round 28, the Yorkshire outfit were beaten by relegation threatened Luctonians at Cross Green last week so Otley will be eager to respond by rounding off the season with a sixth away victory of the term.

Blaydon welcome Hinckley to Kingston Park this weekend knowing their fate is out of their hands. The north-east side slipped back into the relegation places in Round 29 following a defeat to South Leicester and now they are one point off safety heading into the final weekend of the season. Head coach Matt Thompson told us this week that the Crows must stay focused on their own job rather than worrying about what rivals Wharfedale are doing and Blaydon will not be expecting any gifts from visitors Hinckley who will be keen to complete this season on a high.

Please come and support the lads for the final game of the season.

Overall, George Chuter’s side have had a really positive campaign and up until Christmas, they were challenging for promotion. However, inconsistency has plagued them since the turn of the year, but a first away win since February could see the Midlands club end the season in the top four.

Huddersfield fought hard against Sale FC last Saturday, but in the end, the league leaders had too much for Gareth Lewis’ side as they clinched a 45-10 victory. Going to Heywood Road was never going to be easy for Field, but their focus is now on securing a top six finish and it is very much in their own hands. Now Chester’s game in hand against South Leicester has been cancelled, it means just two points from their final fixture of the campaign will seal sixth place for Huddersfield and that would be an excellent achievement considering they were promoted back into this division 12 months ago.

As for South Leicester, a top half finish is on their radar and their equation is simple. Because their match with Chester isn’t going ahead next week, South need to better the result of Macclesfield to finish in the top eight. The Midlands club have rarely budged from the top half of the division throughout this season, but a run of six straight defeats between January and February means they have to fight hard to achieve eighth place on the final day of the campaign. Three wins from their last five games highlights what South are capable of as they aim for another triumph at Lockwood Park this weekend.

It was a 10 minute spell that could prove to be the crucial moment in Wharfedale’s season. Two late tries from captain Phil Woodhead saw Dale turn a defeat into a vital victory against Tynedale in Round 29 and the win lifted the Yorkshire club out of the bottom three. The Greens now have their destiny in their own hands and if they match or better Blaydon’s result when they host Macclesfield this weekend, Wharfedale will be competing in National Two North next season.

Match preview and Team news for the big one – Wharfedale v Macclesfield – Saturday 28th KO 3pm – see you ALL there! https://t.co/cOEqVd7hnP #WRUFC #Nat2N

Dale’s Rob Baldwin told us this week that he wants to keep their fans “smiling over the summer”, but Macclesfield could put a dampener on Wharfedale’s break if they come away from the Avenue with a victory. The Blues were in a similar position to their hosts just before Christmas, but since the arrival of Marshall Gadd, Macc have turned their fortunes around and surged towards safety. The Cheshire club are now aiming to secure a top half finish and with their game in hand with Hinckley now void next week, a win in Yorkshire would seal eighth place.

After their 24-10 defeat to Luctonians, Otley described the Herefordshire side as the ‘escape artists’ and the Lucs will have to produce another couple of masterpieces over the next few weeks if they are to avoid the trapdoor. Ryan Watkins’ side are still alive after their victory at Cross Green and with three games left to go in their season, they are 10 points off safety.

After Round 30, Luctonians face Leicester Lions and Sale FC so avoiding a defeat at Mortimer Park against Sheffield is must if they are to stand a chance of staying afloat for another week. Sheffield travel south after their fate was sealed in brutal fashion last Saturday. An 11-try mauling by Sedgley Park confirmed their immediate relegation back down to the fifth tier, but they have the chance to end their time at this level on a high by clinching their third away triumph of the term.