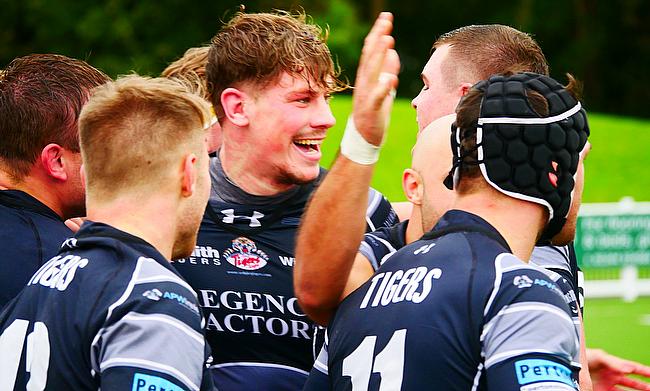 A remarkable comeback from Sedgley Park saw them snatch a late victory at the expense of Chester ahead of a huge couple of weeks in National Two North. (Photo Credit: Glenn Hutton)

Scott Barrow’s side remain four points behind second-placed Fylde, who breezed past Hinckley in Round Seven, whilst league leaders Caldy are five points ahead of Sedge following a seventh successive victory over Otley.

Next Saturday, Sedge host Caldy whilst at the beginning of November, Fylde travel to the Wirral to face the table toppers as the race for a promotion spot starts to heat up.

Below them, Stourbridge moved into fourth place after thrashing Scunthorpe and Loughborough Students continued their purple patch of form thanks to a win over Hull.

Elsewhere, Tynedale were victorious over Preston Grasshoppers, but the game was marred by an injury to Hoppers’ centre Alex Hurst whilst other results saw Sheffield Tigers beat Luctonians and Wharfedale defeat Huddersfield in a Yorkshire thriller.

Caldy secured their seventh straight win of the National Two North season as they totally outplayed Otley at Paton Field.

Tries from Ben Jones, Gavin Roberts and Cameron Davies helped Caldy carry a 22-7 lead into half-time after Otley had gone in front through Adam Malthouse.

After the break, Jones grabbed a second for the hosts whilst Rhys Hayes, Mike Barlow and Cameron Owen also crossed, with Paul Petchey claiming a consolation score for Otley.

Fylde scored six tries in an emphatic victory over Hinckley to maintain their unbeaten record in National Two North.

Tom Carleton scored a brace whilst there was a try apiece for Adam Lanigan, Greg Smith, Scott Rawlings and Lex Botha.

Warren Spragg’s side dominated proceedings in the Midlands and this was another statement of intent from the Lancashire club ahead of fixtures against top three rivals Sedgley Park and Caldy.

Hinckley’s only score came after 30 minutes with flanker Jamie Skerritt touching down, but the afternoon belonged to an in-form Fylde.

The hosts led 17-0 at the break after tries from David Ford and Rhodri Parry, as well as 10 points from the boot of Mark Dixon.

However, a yellow-card shown to Shay Owen 11 minutes from time proved to be the turning point as Sedge capitalised on the man advantage to flip this contest on its head.

James Harper, Dan Openshaw and Tom Ailes all dotted down in an eight-minute window to complete a stunning fightback from Sedge, who remain four points behind the top two.

Stourbridge recovered from back-backs defeats in Round Seven as they comfortably beat Scunthorpe in the Midlands.

An impressive Stour performance saw then over power the visitors and Neil Mitchell’s side led 33-5 at the break with tries from Jack Lea, Dan Rundle, Alex Maxwell, Noah Heward and Afeafe Haisila.

Heward and Jack Samuel went over for second-half tries as the dominant hosts secured the victory at Stourton Park.

Scunthorpe, who are still searching for their first win of the campaign, scored through Oliver Cole, Paul Cook and Tom Foster but this was another tough outing for the Greens.

However, this contest was overshadowed by an injury to Hoppers’ Alex Hurst who lay motionless after a tackle on his own 10m line.

The game was halted for over half an hour and the teams did leave the pitch whilst the centre received treatment before he was stretched off.

Would just like to thank @TynedaleRFC physio and their medical team and our own Mark Taylor on their professionalism and care for Hursty today. They were superb and best news is that Alex initial diagnosis is positive and he’s comfortable.

Following the conclusion of the match, positive news filtered through regarding Hurst’s injured stating he was ‘responsive’ and ‘comfortable’.

The game resumed with Tynedale 6-0 to the good and the hosts were able to extend their lead before half-time as Lowdon and Jake Rodgers crossed the whitewash.

Jordan Dorrington got Preston up and running shortly after the interval, but further tries from Matt Outson and Lowdon sealed the victory for Tyne.

Loughborough Students’ perfect October continued after they fended off a revival from Hull to stretch their winning run to three matches.

Tries from Will Kaye, Jonathan Law and Josh Lewis in the first-half put the Students in command.

Just before the break, Stephen McColl thundered over for Hull and the visitors pulled themselves right back into this match shortly after the restart.

Quick-fire tries from Mike Jobling and Ali Thomson cut Loughborough’s lead to five points put despite dominating possession and territory, Gary Pearce’s side couldn’t find another way through as the Students held on for the win.

Sheffield Tigers picked up their second win on the bounce as they capitalised on Luctonians’ indiscipline to rescue a victory in Yorkshire.

The Lucts made a quick start with a fourth-minute Louis Silver penalty before Rob Lewis and Francis Kelly dotted down for the visitors.

Sheffield Tigers hit back through Jamie Broadley and a penalty from Mark Ireland cut Luctonians’ lead to five points before the break.

Tom Hart’s effort at the beginning of the second-half gave the hosts the lead, but Josh Phipps nudged over a penalty to put the away side back in front.

However, yellow-cards shown to Kelly and Will Kirby in the final 10 minutes proved to be costly for Luctonians as Ireland’s second penalty put Tigers 20-18 ahead.

The decisive blow then came from Sam Johnson who touched down late on to seal the victory.

Wharfedale battled back to clinch a thrilling victory over Huddersfield following a compelling National Two North encounter at Lockwood Park.

A Richard Piper try and two Alex Battye scores were enough for Huddersfield to hold a slender 20-17 half-time advantage with Matt Speres and Henry Macnab crossing for Dale.

Jack Blakeney-Edwards kicked seven points in the first period for the visitors and his try on 42 minutes gave the away side the lead.

Liam Parfitt hit back for Field, but Oli Cicognini’s effort kept Dale’s noses in front in this all Yorkshire affair.

The pendulum swung back in Huddersfield’s favour on the hour as Will Milner landed a penalty, but game was decided in the final quarter as Blakeney-Edwards slotted two penalties before converting Cicognini’s second score eight minutes from time.