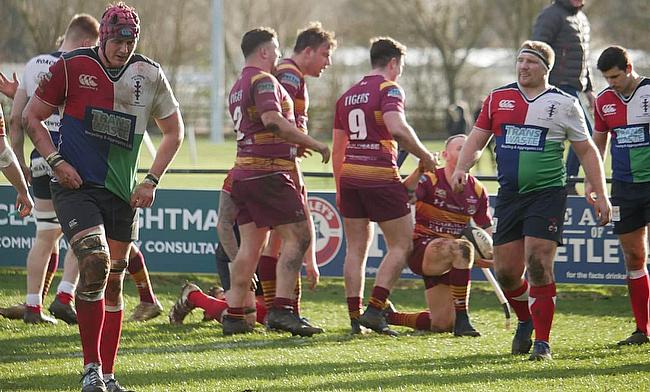 The I’s did manage to salvage two late bonus-points, which keeps them one point clear of second-placed Chester, but this title race has been blown open once again.

The aforementioned Chester eased past Wharfedale on the weekend while fellow top two hopefuls Fylde hammered South Leicester to keep the pressure on.

Otley are up to fourth after their impressive victory against Hinckley, but Huddersfield’s promotion aspirations suffered a setback as they were well beaten by Stourbridge.

At the wrong end of the table, Peterborough Lions’ relegation was confirmed on Saturday because they lost to Preston Grasshoppers and rivals Sheffield Tigers defeated Leicester Lions.

Peterborough Lions are the first side to have had their fate sealed across all three National Leagues while Macclesfield’s own hopes of avoiding the drop were decreased after losing to Tynedale in Round 25.

Hull Ionians’ march towards promotion from National Two North was halted after they suffered a first home defeat of the season against a superb Sedgley Park outfit.

The league leaders found themselves 24-10 down at half-time as Andy Riley (2) and Matt Riley crossed for Sedge, with the impressive Steve Collins kicking nine points.

Get in there! We take all 5 points @Ioniansrufc we are on the rise. #tigers

Steve Slingsby went over for the hosts in the first period and the winger brought the I’s right back into the contest with his second score immediately after the break.

Lewis Minikin landed a penalty to cut the deficit to four points, but an in-form Richard Lepori darted over to keep Sedge in the ascendency, with Collins slotting the conversion and a penalty shortly after.

And despite Minikin’s late score for the hosts, Sedge held on for their fourth victory on the trot while Hull Ionians are now just one-point clear at the summit.

Oli Cicognini got Dale on the board after half-time, but No.8 Owen added another Chester try to wrap up the win for Jan van Deventer’s men, who also sit two points clear of third placed Fylde.

Fylde kept the pressure on the top two in National Two North with an excellent win over South Leicester at Welford Road.

The away side took a 14-0 lead thanks to tries from Tom Carleton and Ben Gregory before Jonathan Hughes crossed for South.

However, Cameron Crampton, Gregory, Jacob Connor and Connor Wilkinson all touched down to make it 40-5 at half-time.

Carleton and Reece Harris swapped tries before Greg Smith grabbed a brace and Carleton completed his hat-trick to round off an excellent Fylde display.

Otley’s top two ambitions were strengthened as the Yorkshire club beat the 14-men of Hinckley, who had captain Alex Salt sent-off.

The Hornets skipper was dismissed after just 11 minutes and Otley were able to capitalise as Harry Skelton’s try gave the visitors an 8-0 advantage.

But their lead was cut to just one point after a converted try from Gareth Turner on the stroke of half-time.

After the interval, Otley were able to surge clear as Ben Magee, Brett Mitchell and Josh Hall all touched down to clinch victory.

Callum Dacey did score late on for Hinckley, but Otley’s win has moved them up to fourth in the table and eight points off second-placed Chester.

Huddersfield’s promotion hopes were dented on Saturday as they were thumped by Stourbridge in the Midlands.

The hosts had the bonus-point in the bag before half-time thanks to doubles from Gareth Simpson and Dan Rundle.

After the break, Rundle maintained his impressive performance by scoring another brace while Mark George, Joe Heatley and Luke Veebel added further tries for the rampant home side.

Lewis Workman, Thomas Owen and Joseph Green scored Huddersfield’s tries, but three defeats on the spin now leaves Field 10 points behind the top two, but they do have a game in hand to come this weekend against Tynedale.

Peterborough Lions have been relegated from National Two North after slipping to their 20th defeat of the season against Preston Grasshoppers.

The Lions’ time at this level has come to an end after just one season in the fourth tier as Preston came from behind at Bretton Woods.

Tries from Tom Lewis and Aki Lea gave the Lions a 12-0 lead, but Hoppers fought back after the interval.

Tyler Spence and Matt Crow both touched down to level the scores with 15 minutes to go and Preston broke Peterborough Lions hearts when Spence raced over to snatch the win for the visitors and seal the fate of the home side.

Macclesfield fell further towards the trapdoor in National Two North as the Blues lost to Tynedale at Corbridge.

Guy Pike put Tyne ahead before Chris Wearmouth and Rob Parker scored as the hosts led 19-5 at the break, with Sam Stelmaszek responding for Macc.

Both sides exchanged tries after the interval with James Hampson’s effort being cancelled out by Morgan Passman and the latter wrapped up Tyne’s win with his second score on 73 minutes.

The defeat for Macc means they are now 19 points from safety with five games remaining in the campaign.

Sheffield Tigers took a huge step towards confirming their status in National Two North as they beat Leicester Lions.

Replacement Sam Johnson won it for the Tigers as he scored three minutes time, with Mark Ireland adding the extras.

Magic @mark_ireland10 doing what he does best to seal yesterday’s game in classic TigerDome conditions.. ???? pic.twitter.com/niMo24C30w

Tries from Ed Simmons and Jamie Broadley put the home side 14-5 ahead after Ben Spokes had crossed for the Lions.

However, the visitors raced in front after the restart as Alex Wilcockson and Dan Ali both crossed while Harry Key landed a penalty to make it 18-14.

But, in the final few minutes, the Tigers pounced and Johnson’s try snatched a vital win for the Yorkshire club, who now sit 15 points clear of the drop zone.