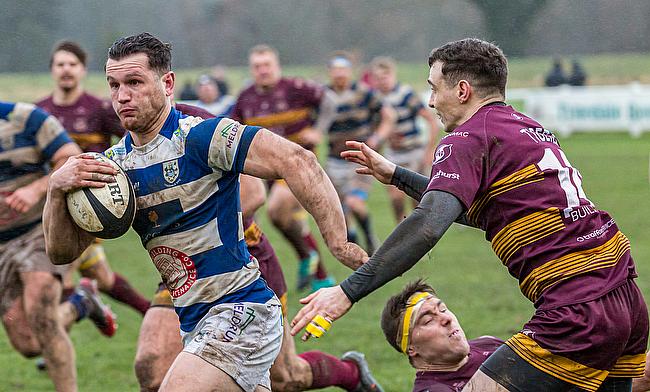 Gareth Davies’ side are galloping towards the title and their pursuit of an automatic return to National One was aided after both Fylde and Sedgley Park lost in Round 18. Photo Credit: (John and Barbara Austin)

Sedge’s recent hoodoo against Tynedale continued whilst second-placed Fylde were beaten by Huddersfield at Lockwood Park, meaning the Lancashire club are now 13 points adrift of Caldy.

In terms of Huddersfield, their own ambitions were given a boost by that result against Fylde as Gareth Lewis’ side sit just four points adrift of safety as the fight for survival heats up.

Frustratingly for Field, though, rivals Luctonians and Wharfedale both picked up impressive wins to keep themselves above the bottom three whilst Preston Grasshoppers’ were unable to follow suit as they were narrowly beaten by Sheffield Tigers.

Caldy strengthened their lead at the top of National Two North as they produced another ruthless display to see off Loughborough Students at Paton Field.

John Whittaker’s try helped Caldy lead 10-0 after Rhys Hayes had opened the scoring before Adam Aigbokhae made it 17-0 at the break.

Nick Royle put the game out of reach with Caldy’s fourth try and Whittaker grabbed his second on 55 minutes. Tom Sanders and Cameron Davies wrapped up another convincing win for the Wirral outfit whilst Loughborough dotted down with one-minute remaining through Matt Wilkinson.

Caldy’s 17th successive victory of the campaign tasted even sweeter as promotion rivals Fylde and Sedgley Park both failed to win.

Huddersfield came from behind to claim a superb bonus-point win over Fylde to boost their hopes of avoiding the drop in National Two North.

Richard Piper’s try had brought Field briefly back into the game, but scores via Tom Hodson and Jack Maplesden, either side of half-time, flipped the contest around.

Two penalties from Will Milner and a converted try from the centre helped Huddersfield clinch the victory whilst defeat for second-placed Fylde leaves them 13 points behind Caldy.

Tries from Will Miller and Guy Pike consigned Sedgley Park to another defeat against Tynedale and also denied them a chance to move into the top two.

With Fylde losing to Huddersfield, Scott Barrow’s side had an opportunity to overtake their rivals in the race for promotion but for the fourth time in a row, Tyne were able to get the better of Sedge.

Danny Openshaw crossed for Sedge’s only try after two minutes, but Miller’s converted effort gave the hosts a slender advantage at oranges.

Tyne increased their lead in the second half and Pike’s score – plus a Jake Rodgers penalty – was enough to see them home.

Despite waves of pressure in the final quarter, Sedge could only muster up a penalty from Steve Collins which saw them claim a losing bonus-point.

Hinckley maintained their impressive recent form as they secured their fifth win from their last six matches after beating Hull.

The Hornets do remain fifth in the table, but after a slow start to the season, the Midlands club are really hitting their straps in the second half of the campaign.

Hinckley scored twice to lead 14-3 at half-time thanks to tries from David Peck and Jamie Skerritt and the hosts extended their advantage on 62 minutes through Luke Coltman.

The away side did cross when Tom O’Donnell dotted down, but it was too little, too late for Hull as Hinckley march on.

Preston Grasshoppers missed a late penalty as the National Two North strugglers were narrowly edged out by Sheffield Tigers at Dore Moor.

The Tigers almost kept Preston scoreless before the break as two Mark Ireland penalties and a Will Wallace try put them 11-0 up, but Tom Davidson kicked three points to bring Hoppers into the contest.

The second period saw was an attritional battle in challenging weather conditions, however with just over 10 minutes remaining, Preston had cut the deficit to a single point thanks to a converted Ally Murray try.

The visitors then had the chance to secure a potentially vital victory from the tee, but Davidson’s penalty was affected by the wind and it sailed wide of the posts.

Still, Preston battled but they couldn’t find another way through as the Tigers clung on for the win.

Stourbridge continued their positive start to the New Year as they totally outplayed Otley in the Midlands.

Tries from Afeafe Haisila and Reece Beddows helped Stour take a 12-0 lead and they were able to increase that advantage further before half-time as both Jack Lea and Dan Rundle dotted down.

Luctonians gave their survival chances a major boost as they overcame Chester at Hare Lane in an entertaining encounter.

The away side made a fast start to the match and led 7-0 thanks to Francis Kelly’s score, but Chester were soon ahead following a penalty try and three points from the boot of Dan Pemberton.

However, the middle portion of this contest belonged to Lucs as Cameron Tawik, Josh Watkins and Callum Young all dotted down whilst a Louis Silver penalty made it 29-10 just after the hour.

Wharfedale aided their bid to avoid the bottom three after 19 points from Jack Blakeney-Edwards helped them defeat Scunthorpe.

The home side ran in seven tries with Oli Cicognini, Sam Gaudie, Oscar Canny and Chris Walker all going over inside the first half an hour.

Blakeney-Edwards added the extras for all four scores and did the same from his own try as well as efforts by Toms Asejevs and George Hedgley.

Tries from Will Scammell and Kane Linklater were little consolation for Scunthorpe, who remain winless and they are now 33 points from safety with 13 games left to play.