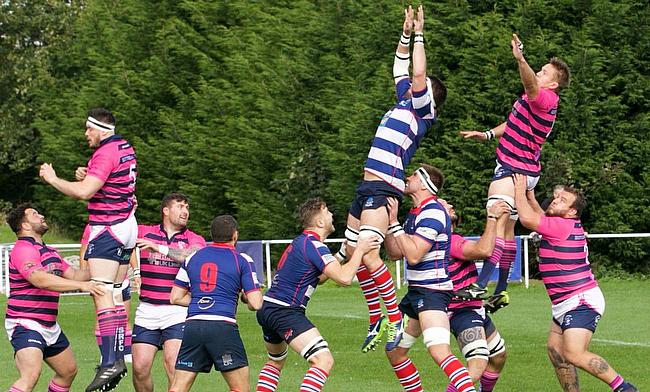 Sheffield secured a narrow win over Hinckley to enhance their chances of avoiding an immediate relegation from National Two North.

The Yorkshire side clinched their fifth home win of the campaign to move to within six points of safety, while Hinckley have fallen down to third in the table following a third defeat in their last five matches.

With Sale FC’s fixture against Macclesfield postponed, Hinckley missed the chance to go top and their defeat also means Stourbridge are up to second in the standings after their victory over Leicester Lions.

Sedgley Park sit four points off the top two places following their hard-fought win against Luctonians, while Tynedale got the better of South Leicester to stay in the promotion hunt.

Elsewhere, Wharfedale’s revival continued in style against Huddersfield and both Chester and Otley secured home victories.

Two penalties from Chris Scott gave the home side early impetus and Joe Heatley’s score helped Stour into a 13-0 lead at half-time.

A score from James Wise soon after the break gave Leicester Lions a foothold in this match, but that was taken away from them as Llyr Griffiths and Dan Rundle both crossed for Stour.

The Lions did have the final say on proceedings as Reece Harris went over for a converted score, but it was merely a consolation for Andy Key’s side.

Well done to @SheffieldRUFC on a fine win yesterday – thanks for the hospitality and all the best for the rest of the year https://t.co/5JCK39TrqF

The hosts scored two converted tries to clinch their second home win on the spin. The result leaves them six points off safety while a Josh Smith try and a Joe Wilson penalty was all Hinckley could muster up at Abbeydale Road meaning this defeat has seen them slip out of the top two places.

Sedgley Park clinched a narrow victory over Luctonians at Mortimer Park to move to within four points of the top two in National Two North.

Tries from Dan Maher (2) and Callum McShane plus seven points from the boot of Andy Riley secured the win for Sedge, but they were made to work hard by their hosts.

Lucts were in this game throughout thanks to scores from Owen Davies and Josh Watkins, but despite hammering away at the Sedge defence, they had to settle for a losing bonus-point.

Peter Southern scored on his 300th appearance as Tynedale secured a bonus-point win over South Leicester to keep their hopes of finishing in the top two alive.

Two Jamie Blamire scores along with tries from Oli Walker and Tom Bramwell gave the hosts a 26-14 half-time lead, with Rickie Aley and Myles Bean going over for the visitors.

Walker completed his hat-trick after the break and Jack Ouston added a further try before Southern put the game beyond any doubt.

The Tynedale stalwarts’ effort did settle the nerves as South looked as though they were going to pull off a remarkable fight following a penalty try and scores from Javiah Pohe and Bean, but in the end, the Midlands side left it too late.

Wharfedale continued their superb recent run of results as they comfortably beat Huddersfield at The Avenue.

Charlie Graham and Kieran Frost crossed in the first 40 minutes to give Dale a 14-0 lead at the break.

The hosts took a 7-0 lead following a try from Tom Foden, but Joel Matavesi responded for Blaydon to tie the game up.

However, the second half was dominated by Chester and they ran in three tries via Ed Morris, Jonny Charmley and Alex Reid to consign Blaydon to a seventh successive defeat which leaves them nine points adrift of safety.

Otley’s recovery continued in Round 22 thanks to a victory over Sheffield Tigers at Cross Green.

A muddy, cagey affair for the most part, but @OtleyRugby finished it off in style & with bonus points against @SheffTigersRUFC Great result!!! pic.twitter.com/AeQ7OGDtTt

The home side have now won six of their last nine games which has seen them move away from the bottom three and tries from Jack Mackie, Tom Hodson and Joe Graham gave them a 17-14 lead in this encounter.

The Tigers had led 14-0 through Jamie Broadley and Pete Swatkins, but they could only manage a penalty after the break as two kicks from Joe Rowntree and a Ben Bell try wrapped up the win for Otley.