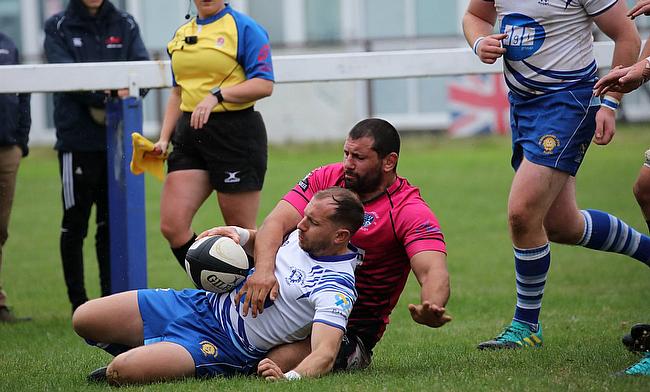 South Leicester travel to Peterborough Lions on Saturday for what could be a vital National Two North fixture in the battle for survival.

The Midlands club play relegation rivals Peterborough, who sit at the foot of the division, and the Lions are 19 points from safety as things stand.

As for South, they are seven points away from climbing out of the bottom three so a win for either side is a high priority this weekend. Fellow strugglers Macclesfield are 14 points adrift of safety and they host Sedgley Park in Round 19.

At the right end of the division, league leaders Hull Ionians face Wharfedale in an all-Yorkshire affair while second placed Chester visit Tynedale as they aim to stay in control of the play-off spot.

It was dramatic and tense, but Hull Ionians came out on the right side of things against Hinckley in Round 18 to maintain their grip on the National Two North promotion race. The league leaders are six points clear at the top and despite their blip in form over the Christmas period, the I’s have actually now won their last three matches.

Here’s a look at the #Nat2N table as we enter Round 19 with @Ioniansrufc leading a congested mid-table league ?? pic.twitter.com/ogb9aUdG7g

Normal service seems to have resumed for the men from Brantingham Park and they make the short trip to Wharfedale this weekend aiming to build upon their momentum. As for the hosts, they will be going in search of a welcome victory. Dale have won just one of their last seven matches and after beginning the season very positively, the Greens have slipped to 13th in the table and they are now only seven points clear of the bottom three, with a game in hand. The last time the sides met at the Avenue was in April 2016 when they were both in National One and on that occasion, Hull were victorious so Wharfedale will be keen for history not to repeat itself this time around.

It is just over two months since Tynedale and Chester met in their rearranged fixture in National Two North and since then, the fortunes for both clubs have been positive. Chester travel to the North-East on Saturday currently occupying second spot in the division and Jan van Deventer’s side have won five of their last eight games to remain firmly in the promotion hunt.

They are six points off league leaders Hull Ionians and four clear of third placed Fylde, while Tynedale head into Round 19 in eighth position. Ben Woods’ side have also won on five occasion since their last meeting with Chester which has seen them move away from any sort of relegation scrap. The hosts have also lost just once at home all season and with both sides in decent form, this should be an entertaining contest at Corbridge.

It was far from pretty, but Fylde’s hard-fought win over Leicester Lions in Round 18 was exactly the sort of performance a promotion chasing side need to produce throughout the season. Warren Spragg’s men were able to extend their unbeaten run to nine matches and they are now four points off second placed Chester as they prepare to take on Sheffield Tigers this weekend.

If you want to get your money’s worth when watching rugby this term, then look no further than the Tigers. In their last three matches, 193 points have been scored, but from a Sheffield perspective, they have fallen to defeats in each of those games. Jamie Broadley’s side have actually won just one of their last six matches and they currently sit 12th in the table as things stand. They are 10 points clear of the drop so they aren’t looking over their shoulders just yet, but a fourth win of the campaign at Dore Moor would certainly be a welcome boost for the home side.

Huddersfield were able to keep pace with the promotion battle last weekend as a victory over Macclesfield at Lockwood Park stretched their unbeaten run to four matches. Gareth Lewis’ are back in the groove after a slight wobble towards the end of 2018 and with a game in hand, the Yorkshire outfit seven points behind the play-off place.

But, their top two credentials will be put to the test this Saturday when they travel to an improving Leicester Lions side. Prior to Round 18, Andy Key’s men had won three games on the trot and even though their winning streak was halted by Fylde last time out, there would have been plenty of positives for the Lions to take away from Lancashire. The Midlands club have also not lost at home since the end of September so the 11th placed side will provide a stern test for Huddersfield at TMDP Park.

Otley keep on churning out the results. Charlie Maunder and Tom Casson’s men are continuing to have a very enjoyable season and last weekend’s narrow win over Wharfedale saw them move up to fifth place in National Two North. The Yorkshire side have now picked up five wins from their last six games and with them only 10 points off second placed Chester, they could be considered to be in the hunt for a top two spot.

For now, Otley will just be happy focusing on themselves and next up for the men from Cross Green is a trip to Preston Grasshoppers. Paul Arnold’s side were in a rich vein of form before the Christmas break, but now the Lancashire club are going throw a mini-dip in results. Hoppers have lost their last three games, but they are back at Lightfoot Green this weekend where six of their seven victories have come this season. Can Preston return to winning ways or will Otley roll on?

After ending their away day woes in Round 18 with an excellent win over Wharfedale, Hinckley so nearly secured back to back victories on the road last weekend, but they were unable to achieve that goal as Hull Ionians snatched the points at Brantingham Park. The result for the Hornets saw them drop down to sixth in the table and they are now 10 points off the top two, but George Chuter’s side will certainly have taken some plus points from a defeat against the league leaders.

With an upturn in performances on their travels, Hinckley are back at Leicester Road for the first time in 2019 this weekend when they entertain Stourbridge. The hosts are unbeaten on their own patch this season so the task facing Stour won’t be an easy one. However, Neil Mitchell’s side received a shot in the arm in Round 18 as they defeated Peterborough Lions to move up to ninth in the table. Stour have not secured successive wins since the middle of October so they will be keen to wipe away that unwanted stat in this Midlands derby on Saturday.

In 2015/16, Macclesfield and Sedgley Park were competing for promotion to National One, but fast-forward three years, and both clubs are going through very different campaigns. After finishing second last term, Sedge have had a very inconsistent season due to injuries, but they will be hoping their recent victory over Preston Grasshoppers can kickstart a strong second half of the season.

Dan Lomax was one of the scorers away at @Huddersfield_RU the other day as Macc finished strongly thanks to some @TomMorton1010 magic!! #maccrugby see #maccrugbytv for all the action pic.twitter.com/blenKem0ll

Matt Bebbington’s side sit seventh as things stand whilst their hosts on Saturday remain in the bottom three. Macc produced another spirited display in Round 18, but found themselves on the wrong side of the result against Huddersfield. Their loss in Yorkshire means the Blues are 14 points from safety as things stand thanks to just one win from their last five games. However, all four of Macclesfield’s victories have come at home this term and another triumph at Priory Park may well be a necessity as Marshall Gadd’s side look to pull off a remarkable revival.

What a game we have to finish up with. Two sides currently in the bottom three collide at Bretton Woods as Peterborough Lions host South Leicester. The visitors come into this clash in better shape than the home side as South currently sit just seven points from safety after a couple of decent performances to begin 2019.

A win against Sheffield Tigers and a spirted display in defeat at Tynedale has breathed new life into South’s season while Peterborough Lions have a mountain to climb. A 52-34 loss to Stourbridge last week means the Lions are 19 points adrift at the bottom of the table and even with their game in hand, they have a serious amount of work to do if they are to produce a great escape. Victory against a fellow struggler has to be delivered on Saturday otherwise Peterborough Lions could well be heading for an immediate return to Midlands Premier.