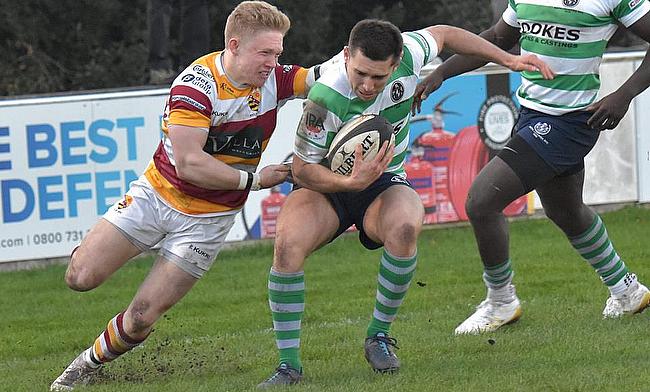 South Leicester’s National Two North survival bid will receive a massive boost if they can get past local rivals Leicester Lions this weekend.

The two Midlands club collide at Welford Road in Round 16 with South currently sitting six points from safety.

The Lions are the team directly above South so a victory for Andy Key’s side would move them further away from danger as they look to add to their superb win against Hull Ionians, which they picked up last time out.

Speaking of the league leaders, they will be hoping for some Christmas cheer on Saturday as a tough December draws to a conclusion.

Hull have lost two of their three fixtures this month, but they have the chance to end on a high when they host Tynedale while promotion rivals Chester and Hinckey aim to return to winning ways when they face Macclesfield and Peterborough Lions, respectively.

There are also two more tasty derbies in National Two North this weekend as Fylde and Preston Grasshoppers meet at Woodlands while Otley travel to Huddersfield for an all-Yorkshire affair.

Elsewhere in the final round before Christmas, Sedgley Park host Wharfedale and Sheffield Tigers go to Stourbridge.

It has not been a joyful and triumphant December for Hull Ionians. Defeats against Preston Grasshoppers and Leicester Lions, combined with a last-gasp win against Macclesfield, has slowed down their title charge, but despite their stuttering form, the Yorkshire outfit still remain at the summit of National Two North.

The I’s are four points clear of the chasing pack and a victory over Tynedale this weekend would leave them at the top of the tree on Christmas Day. However, Tyne travel to Brantingham Park hoping to capitalise on Hull Ionians’ indifferent form. Ben Woods’ men weren’t in action last weekend as their fixture with Peterborough Lions was postponed so it will be a fresh Tynedale side who will take on the league leaders. The North East outfit occupy 11th place as things stand so they will be hoping to pick up a positive result in their final game of the year.

We have an all Cheshire-affair in National Two North this weekend as Chester take on Macclesfield at Hare Lane. The hosts currently occupy second place, but Jan van Deventer’s men missed the opportunity to exert pressure on Hull Ionians last Saturday. They fell to a narrow defeat against Otley meaning Chester are still four points off the top, but they did keep hold of their position in the top two despite their fourth defeat of the campaign.

Just a couple of changes with Jan’s team this week as they look forward to a local derby with @MaccRUFC this weekend. There’ll be plenty of support as the VPs will be in full force at their Christmas lunch beforehand! #Nat2N pic.twitter.com/c6JeQ3Fp16

In Round 16, they take on a Macclesfield side that has exploded into life over the past few weeks. Successive home victories over Hinckley and Stourbridge, as well as a very encouraging display against Hull Ionians, has rejuvenated the Blues’ season. Marshall Gadd’s side still occupy a position in the bottom three and are 10 points from safety so there is still a lot of work to be done, but Macc will be very pleased with their upturn in performances. Can they now conclude the month with a positive result to strengthen their survival bid heading into 2019?

Hinckley’s defeat to Sheffield Tigers in Round 15 completed an unwanted statistic for the front-runners in National Two North. The top three sides all lost last weekend and in terms of Hinckley, a narrow defeat to the Tigers continued their away day blues, but at home this season, it has been a different story for George Chuter’s men.

The Hornets have won all eight of their fixtures at Leicester Road and that is the best record in the league so the task facing Peterborough Lions will be a difficult one on Saturday. The division’s bottom club will be aiming to upset the odds in the Midlands and they come into this fixture with Hinckley feeling re-energised after their match with Tynedale was postponed last week. The Lions are 15 points from safety with a game in hand, but two wins from their last three matches should give them confidence as they aim to end Hinckley’s 100 per cent home record.

It is one of the standout fixtures in National Two North as old rivalries are renewed once again when Fylde and Preston Grasshoppers clash at Woodlands. Both sides come into this Lancashire derby in excellent form with the hosts currently on a six-game unbeaten run. Warren Spragg’s men picked up a very good win over Sedgley Park in Round 15 and it means Fylde are now up to fourth in the table.

@fylderugby v @RugbyHoppers What a Christmas Cracker that will be Saturday ??
Win,lose or draw I’m looking forward to soaking up the atmosphere sat in the stands & in the bar after. Two top clubs. The official weigh in was last night ??love you @spraggio but don’t tell anyone?? pic.twitter.com/fGQWOddKdP

They are also just seven points off second-placed Chester, but hoping to dent their possible promotion hopes will be their local rivals. Preston were promoted to National Two North back in April and they are thoroughly enjoying their return to this level. Former Fylde player and coach Paul Arnold as guided the Hoppers to four wins from their last five games and the men from Lightfoot Green fully deserve to be occupying seventh spot as things stand. In the reverse fixture back in September, Preston clinched the bragging rights and they will be hoping for a similar outcome against their near neighbours this weekend.

In the final game before Christmas, it is sixth against fifth as Huddersfield take on Otley in an all-Yorkshire contest at Lockwood Park. The visitors maintained their excellent form in Round 15 as a narrow win in awful weather conditions against promotion chasing Chester saw Otley secure their seventh victory from their last eight games.

Their triumph at Cross Green saw them leapfrog Huddersfield in the table, but the hosts on Saturday have the chance to respond after not being in action last week. Their away fixture with Wharfedale was called off which denied Field the chance to bounce back after three games without a win. Their dip in form has just hampered their promotion ambitions, but victory on Saturday could kick-start their top two bid ahead of the Christmas break.

This weekend, the second half of the season begins for all of the clubs in National Two North and Sedgley Park will be keen to put the first 15 games of this campaign behind them. A loss to Chester at Park Lane last Saturday arguably summed up a tough four months for Matt Bebbington’s side who have struggled to reproduce the form which guided them to the play-off last term. The Manchester-based club have had some key players absent due to injury, but that aside, they currently find themselves in eighth place heading into the New Year so they will want to end 2018 on the front foot when they host Wharfedale.

The visitors will arrive in the North-West having had a weekend off following the postponement of their match with Huddersfield last Saturday and the Greens have the chance to move above Sedge with a win in Round 16. Rob Baldwin and Jon Feeley’s side have had a positive season up to now and Christmas spirits will be raised further if they can secure a victory this weekend.

After throwing away the lead and a potential win against Peterborough Lions in Round 14, Sheffield Tigers produced the perfect response last weekend. Jamie Broadley’s side battled to a victory against promotion challengers Hinckley to leave the Tigers sitting comfortably in mid-table as we approach the Christmas interlude in the season.

The Yorkshire outfit can move into the top eight if results go their way this weekend and they may fancy their chances of claiming a fourth away win of the campaign when they travel to Stourbridge. The reason for this is because the hosts are really struggling for form. Neil Mitchell’s men have won just one of their last seven games which is their worst run of results since the beginning of last year so the perfect early Christmas gift would be a home win for the side who currently sit in 12th place.

In terms of distance, South Leicester and Leicester Lions is one of the closest rivalries in the National Leagues and when it comes to current league position, the same rule applies. This Midlands derby could be seen as the most significant one for a while as both sides look to move away from danger. As things stand, Leicester Lions are six points clear of the relegation places following a fabulous victory over league leaders Hull Ionians in Round 15 and it is now two wins from their last three games for Andy Key’s men.

The Lions have won only once on the road all term so that might be an encouraging statistic for South Leicester who are desperate for a victory. Just one win in 10 matches has left South in the drop zone, but they have the perfect opportunity to stop the rot just before the Christmas break. A win for the hosts would provide a massive boost heading into 2019, but a defeat would leave them with a lot of work to do after the turn of the year.