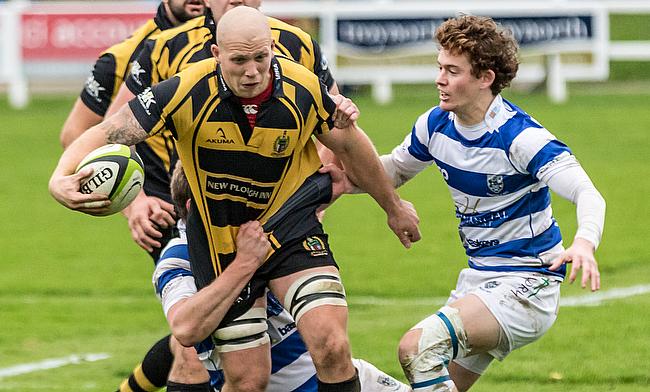 Hinckley secured a superb National Two North victory over Hull Ionians in their top of the table clash, despite being reduced to 14-men for over 50 minutes of the contest.

The Midlands side battled to a fourth consecutive win which means George Chuter’s side are now at the summit of the division while promotion candidates Hull Ionians suffered their first loss since relegation from National One.

Chester are now the only other side yet to taste defeat in National Two North as they comfortably beat Leicester Lions in the Midlands to go second in the table.

Elsewhere, Fylde, Sedgley Park, Stourbridge, Huddersfield and Otley all won on the road in Round Four while Tynedale and South Leicester shared the spoils after a thrilling contest in the north-east.

Hinckley preserved their winning start to the season and moved to the top of National Two North after an enthralling bonus-point victory over Hull Ionians.

The hosts never fell behind in the contest despite having Callum Dacey sent-off in the first period.

George Chuter’s side led 16-12 at the break thanks to tries from Joe Glover and Alex Salt while Joe Wilson also landed two penalties.

A try, 2 cons and 2 pens from @Mr_Joe_Wilson lead Hinckley to a 35-24 win over @Ioniansrufc despite a red card for @callum_dacey5. @Joeglover9 also scored 2 and Salt and @dylanweddle9 also crossed the line

Hull Ionians, who came into this fixture with a 100 per cent record, were very much in this contest heading into the second half following scores from Sam Wilson and Toni Kuku, but Glover crossed once again for Hinckley to keep the home side in control.

He was quickly followed by Joe Wilson to give Hinckley a 30-12 lead, but back came the I’s.

James Tincknell kept up his excellent start to the season with Hull’s third try on 70 minutes, but that was immediately cancelled out by replacement Dylan Weddle who ultimately sealed victory for Hinckley.

Hull did have the final say in the Midlands as Ben Bell crossed late on, but it was merely a consolation as the men from Brantingham Park slipped to their first loss of the campaign.

Chester moved up to second in National Two North after coming from behind to beat the 14-men of Sheffield Tigers.

The Tigers led this contest 15-10 just after half-time following scores from Greg Mellor and Henri Packard, but a second yellow card shown to Frank Wragg on 57 minutes proved to be the turning point in the game.

Matthew Van Sertima and Michael Craven had crossed in the first period for Chester and they took the lead through Alick Croft shortly after Wragg’s departure.

However, the hosts hit back as Mark Ireland landed his second penalty of the afternoon just after the hour, but Chester were able to clinch the victory in Yorkshire as Van Sertima darted over to extend his side’s winning run to four matches.

Ben Gregory scored twice as Fylde enjoyed their first away win of the season against Leicester Lions.

Adam Lewis touched down for Fylde after just one minute at TMDP Park.

The visitors were then seemingly in control of this contest as Tom Carleton and Gregory (2) went over before the interval.

Leicester Lions were 15 points behind at the break after a brace from Ethan Godefroy and the lock completed his hat-trick shortly after the restart to keep the hosts in touch.

But, Henry Hadfield and Tom Burtonwood ran in further scores for Fylde to seal the victory, while Harry Key and Simon Johnson added two more tries for Leicester who are still searching for their first win of the season.

Sedgley Park sealed their maiden away victory of the campaign after a breathless encounter with newly promoted Preston Grasshoppers at Lightfoot Green.

Danny Maher’s early score set the tone for a thrilling game in Lancashire.

However, Preston produced a storming fight back as scores from James Fitzpatrick, Paul Millea and Sam Stott edged Hoppers ahead, but Maher’s hat-trick and the boot of Glasse sealed victory.

The hosts did come away with two points as Tom Davidson slotted over a late penalty, but this was another narrow loss for Paul Arnold’s men.

Stourbridge ran in five tries as the Midlands outfit brushed aside Peterborough Lions at Bretton Woods.

Joe Heatley, Llyr Griffiths, Adam Shaw and Nicholas Cairns helped establish a 26-0 half-time lead for Stour, who were looking for their first away triumph of the season.

Peterborough Lions were awarded a penalty try just after the hour, but Stourbridge wrapped up the victory as Adam Rundle scooted over after a Rickie Aley penalty.

Tyne led at the break after tries from Morgan Passman, Guy Pike and David Cooke cancelling out efforts from Adam Johnson and Javiah Pohe.

Will Cave then gave South the lead with a score on 54 minutes, but tries from Joe Mills and Benjamin Beaumont put Tyne in front.

However, a first victory of the season eluded the hosts as Ireland dotted down five minutes from time, but South missed the conversion and a late penalty which would have snatched the win at Corbridge.

Huddersfield claimed back to back victories with a bonus-point win over Macclesfield at Priory Park.

The visitors led by nine points after an intriguing first half with Richard Piper and Kian Stewart scoring tries.

Piper and Stewart both crossed again after the break which was enough to clinch the bonus point and the game for Field.

Macc could only add tries through James Hampson and Daniel Lomax to Tom Morton’s early penalty.

Otley produced an excellent second half performance to clinch their first away win of the campaign against Yorkshire rivals Wharfedale.

FT @wharfedalerufc 14 – 16 @OtleyRugby #Nat2n
Very disappointing to lose, but huge credit to Otley who were the better team in the 2nd half.
A good old fashioned derby

With Otley trailing 14-8, a Brett Mitchell try shortly after half-time and a Joe Rowntree penalty gave the visitors their second victory of the season.

The hosts were second best after the break and they scored their points through Dan Stockdale and Tom Mann in the first period, while Oliver Goss also crossed for Otley in the opening 40.