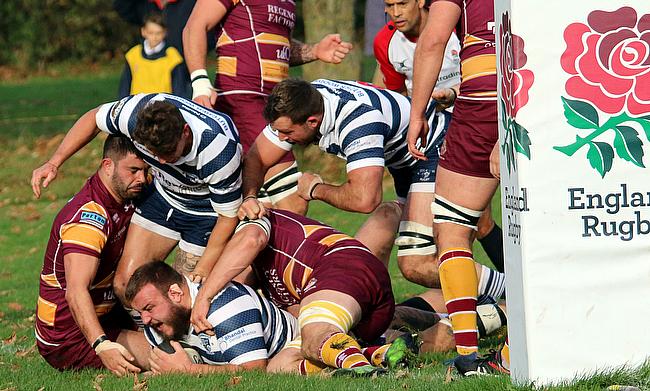 Stourbridge stretched their lead at the top of National Two North, but had to withstand a second-half fightback before beating Sedgley Park in the Midlands.

The home side clinched their ninth straight victory of the season against a strong Sedge side and the win for Stour means they are now 11 points clear at the summit heading into November.

Second placed Tynedale once again lost ground as they saw an 18-point lead slip away against Hinckley while Sale FC, Leicester Lions and Sheffield Tigers all won.

In the bottom half of the table, Sheffield secured their first victory of the season as they edged past Blaydon and there were also triumphs for Chester and most notably, Macclesfield.

Stourbridge survived a Sedgley Park fightback as they maintained their 100 per cent start to the season with a bonus-point victory.

Tries from Josh Trinham (2), Jack Lea and Nick Murphy, to a close range score and one from Nathan Rushton, gave Stour a 26-12 half-time lead.

Rushton and Lea exchanged tries after the break, but scores from Callum McShane and Ollie Glasse cut Stourbridge’s lead to just two points.

With 20 minutes still to play, this game was in the balance but despite waves of pressure from Sedge, Stour held on to secure their ninth straight win of the campaign.

A try by full-back James Spence gave Tynedale the lead and they seemed to be cruising at the break as Ash Smith kicked eight points to give them a 13-0 advantage.

The hosts flew out of the blocks after the restart and when Guy Pike touched down, the result looked assured.

But Gareth Turner went over and Hinckley then found themselves one point behind Tyne when Wilson landed a penalty and converted Alex Salt’s try.

And the comeback was complete when Wilson converted three points as the clock ticked towards red.

Sale FC secured their first away win of the campaign as they beat Otley at Cross Green.

A converted Chris Mayor try put Sale FC 7-0 ahead, but their lead was cut to two points just before the break as Tom Hodson dotted down for the hosts.

After the interval, Hodson and Chris Johnson exchanged penalties before Tom Ailes extended Sale’s advantage with their second score of the afternoon.

Otley remained on the coattails of Sale when Alex Beaumont crossed on the hour, but converted tries from Aaron Reed and Will Davies clinched the win for the men from Heywood Road.

Macclesfield ended a run of four straight defeats as they battled to victory against South Leicester at Priory Park.

Lewis Barker opened the scoring from the tee for Macc and he was on hand to convert Ryan Parkinson’s try to give the hosts a 10-3 lead at half-time.

South’s star man this season, Rickie Aley, reduced Macclesfield’s advantage to four points with his second penalty of the afternoon, but Barker replied to restore the Blues’ cushion.

Aley kept the away side in the match with another penalty on 66 minutes, but the key moment came right at the death as David Marwick touched down to give the hosts a much needed win.

Leicester Lions bounced back from a defeat against Stourbridge to beat Wharfedale, who are now bottom of National Two North.

The visitors dominated the first half and surged into a 19-0 lead at the break, with Patrick Ryan, Devon Constant and Henry Clement all going over.

Wharfedale got on the board after the interval via a Tom Barrett penalty, but the Lions wrestled momentum back as Alex Smith touched down.

Dale did grab a score in the dying embers as James Guy crossed, but it wasn’t enough to stop the Yorkshire side slipping to their eighth defeat of the campaign.

Mark Ireland kicked 21 points as Sheffield Tigers beat Luctonians to move into the top half of the National Two North table.

The Tigers amassed 18 points in the first half via tries from Jamie Broadley and Henri Packard as well as the boot of Ireland.

Converted scores from Guy Kirby and Joe White kept Lucts very much in this contest and both the sides then shared some 47 points after the interval.

Kirby got the ball rolling to put the hosts ahead, but Ireland popped up with another three points to put his side back in front.

Will Burton and Alex Graham then exchanged scores before Packard grabbed his second try of the afternoon to Sheffield Tigers a 35-26 lead.

Luctonians continued to battle as Jordan Street’s converted try set up an intriguing final 10 minutes, but Ireland was on hand yet again to add a further six points , before Broadley doubled his tally,  to clinch a third win on the spin for the Tigers.

Chester’s superb home form continued as they made it four wins in a row at Hare Lane after edging past Huddersfield.

Josh Woods scored Chester’s first try before a penalty try, plus a score from Craig Ross, put the hosts ahead at the break.

Tom Owen had gone over for Huddersfield in the first period and Harry Davey’s try and a penal cut Chester’s lead to just two points, but the hosts retaliated.

Guy Ford and Alick Croft both crossed to deny Huddersfield a bonus-point as Chester maintained their excellent form on their own turf.

Sheffield won a close encounter against Blaydon to seal their first victory of the season.

It ends a nine game wait for their maiden triumph since promotion from National Three Midlands and this win means Sheffield are now off the bottom of the division.

Blaydon actually took a 7-0 lead with Rob Lenderyou going over, but Sheffield held the advantage going into half-time thanks to scores from Dan Rylands and Fergus Wood.

Stephen Depledge also added a penalty for the hosts, but when James Cooney finished superbly, there was just three points in it.

However, Depledge landed another three points to give Sheffield a cushion and they then held on to seal their first success of the term.