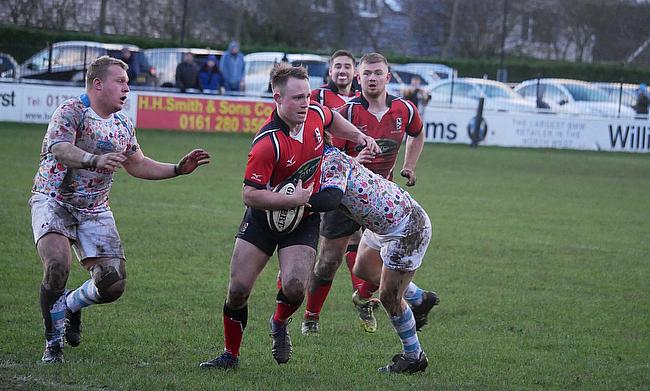 Stourbridge, Hinckley and Blaydon all picked up vital wins in National Two North as each side took a step in the right direction in Round 23.

Both Stour and Hinckley have enhanced their top two ambitions with victories over promotion rivals Sedgley Park and Tynedale, while Blaydon ended a seven game losing streak to beat Sheffield and reignite their survival bid as they aim to avoid relegation.

League leaders Sale FC waltzed to victory over Otley to stay four points clear at the summit while at the bottom of the table, Luctonians and Wharfedale both lost to Sheffield Tigers and Leicester Lions, respectively.

Meanwhile, Macclesfield defeated South Leicester at Welford Road and Chester picked up a welcome away win against Huddersfield.

Sale FC secured their 14th successive win as they ran in eight tries to thrash Otley at Heywood Road.

The National Two North league leaders had the game wrapped up at half-time thanks to a penalty try and scores from Andy Hughes, Sam Stelmaszek, Jack Moorhouse and Mark Lawrence.

Paul Petchy struck back before the break for Otley, but Sale continued to be clinical as Gareth Rawlings opened the scoring for the second half.

Another penalty try plus Chris Johnson’s effort completed the rout for Sale.

Stourbridge battled back in the final 15 minutes to overcome promotion rivals Sedgley Park in their National Two North clash at Park Lane.

Sedge were trailing 22-20 just after half-time despite a Dan Maher brace, but following two tries from substitute Max Skofic the hosts put themselves seven points ahead in a pulsating contest.

However, two tries in the final quarter of this encounter was enough for Stour to clinch victory to leave them two points behind leaders Sale FC whilst Sedge are now seven points off the top two.

Hinckley’s Joe Wilson landed a late penalty as they clinched victory over Tynedale to keep them firmly in the hunt for a top two spot.

But Mitchell Lamb and Wilson both crossed either side of Joe Mills’ effort to give Hinckley a 26-21 advantage.

Tynedale’s Nick Cairns responded to put the away side ahead once again, but after missing his first attempt, Wilson was able to hold his nerve from the tee on 77 minutes to snatch an important win for George Chuter’s side.

Chester secured their third away win of the campaign as they narrowly beat Huddersfield at Lockwood Park.

Tries from Pete Rees and Guy Ford helped Chester open up a four point advantage and it was a lead they never relinquished.

Huddersfield had led this contest twice thanks to a penalty and a try, but Gareth Lewis’ men couldn’t muster up another breakthrough as Chester sealed their third victory on the spin to move above Field in the table.

Macclesfield have moved 11 points clear of danger in National Two North after victory over South Leicester at Welford Road.

Billy Robinson’s response to a Myles Bean try set the tone after five minutes, with

The hosts stayed on the coattails of Macc as Bean grabbed his second, but the away side took full control with tries from Lewis Barker, Sam Broster and Sam Moss.

South did have the final say as they claimed a try bonus-point, but it was merely a consolation as Macclesfield continued their resurgence.

Alex Wilcockson scored a brace for the hosts, who ran in five tries at TMDP Park.

Wilcockson swept over for the opening try, but Dale responded through George Hedgley and Tom Barrett.

The home side were never behind after Devon Constant and Wilcockson crossed just before half-time.

Tom Aviss and Luke Veebel went over for the Lions after the break and Dale were able to claim a losing bonus-point as Dan Stockdale and Phil Woodhead dotted down, but in the end, this was a welcome victory for Andy Key’s side.

Sheffield Tigers secured back to back home victories as they beat Luctonians, who are now nine points from safety in National Two North.

The Lucts led through a Seb Robinson try and a further score from Guy Kirby plus five points from the boot of Sam Boxhall gave the visitors a half-time lead.

Tom Hart had gone over in the first half for the Tigers and they were level after the break as Pete Swatkins crossed.

Both sides then exchanged tries before Jamie Broadley went over for the decisive score to secure the win for Sheffield Tigers.

Blaydon have moved to within five points of safety in National Two North thanks to a bonus-point victory over Sheffield at Crow Trees.

Blaydon’s Jack Appleton dived over before Matt Thompson and Dan Marshall both crossed to give the hosts a 19-12 half-time lead.

Gareth Morley and Stephen Depledge responded for Sheffield and the latter knocked over two penalties after the restart.

Andy Miller dotted down for Blaydon’s fourth try and Appleton grabbed their fifth to give them an 11-point cushion.

However, Sheffield rallied to seal a losing bonus-point as both sides now enter a critical part of the season in their respective fights for survival.