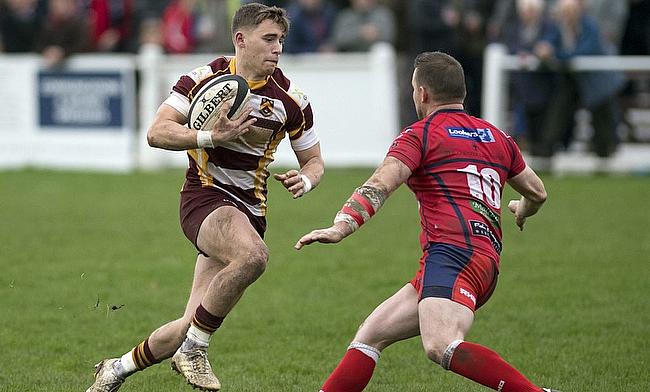 Huddersfield maintained their excellent form with a superb victory over Hinckley in Round Nine of National Two North.

Gareth Lewis’s side have now won seven games on the spin and their wonderful run of results has seen them move into the promotion places after two months of the season.

The Yorkshire side are now just four points off league leaders Hull Ionians, who defeated Fylde to continue their momentum.

Fourth placed Sedgley Park got their promotion hopes back on track with a battling win over Peterborough Lions while Chester are still very much in the mix after a victory against Stourbridge.

Elsewhere in National Two North, Wharfedale and Otley both picked up wins against South Leicester and Tynedale, respectively, while Preston Grasshoppers found themselves on the right end of the result against Sheffield Tigers and Macclesfield secured a crucial victory over Leicester Lions.

The Hull centre kicked two penalties and converted Ben Stephenson’s try in the first half, but the visitors did trail 17-13 following Fylde scores from Tom Carleton and Ralph Dowds.

Ben Bell dotted down just after the interval to put the I’s in front before Minikin converted his own score on 53 minutes.

Oliver Parkinson’s effort just before the hour kept Fylde in the contest, but tries from James Newman and Ed Falkingham put Hull Ionians out of sight.

Connor Wilkinson did grab a try bonus-point for Fylde late on, but it was the Yorkshire side who prevailed as they sealed their fifth win on the spin.

Huddersfield secured their seventh victory in a row in some style as they beat Hinckley at Lockwood Park.

The Yorkshire side are now up to second in the table after this latest win as Gareth Lewis’s men continued their sensational form.

Flanker Ross Thornton began the scoring for the hosts before Harry Davey (on his return to Huddersfield) and Arthur Wilkinson also crossed to put them 19-3 ahead.

Nick Sharpe, Lewis Bradley, Will Milner and Davey went over in the second half to underline Huddersfield’s dominance.

Hinckley’s only points came via the boot of Joe Glover in the first period while Ryan Hough crossed for the Midlands club late on.

The hosts went 21-0 ahead after tries froim Thomas Bedlow, Mark Goodman and Jamie Harrison, but the Lions responded to cut the lead to 16 points.

A brace from Thomas Lewis and a penalty from Ben Young gave the visitors a route back into the game, but Sedge took it up a notch once again as Andy Riley and Max Skofic both touched down.

With Sedge’s advantage now 31-15 with just over 10 minutes to play, the visitors once again mounted a response and their determination was rewarded with two bonus points.

Christian Edbrooke and Alex Ioannou both crossed for the Lions, but it was too little too late to complete a remarkable comeback.

With the scores level just after the hour, Van Sertima’s try on 72 minutes was enough for the home side to claim their fourth consecutive win at Hare Lane this season.

High-flyng @RUFCChester continue to impress this season after their thrilling victory over Stourbridge at Hare Lane. https://t.co/fo6FNUe7Ct

Craig Ross, Josh Morris and James Robins got Chester’s first-half scores as they led 19-3 at the break.

The visitors claimed a losing bonus-point following touchdowns from Sam Wilks, Reece Beddows and Dan Rundle in a much improved second half display from Stour.

Dale, who are now up to seventh following this victory, fell behind early on after Joe Collingham’s try for South.

And the visitors were five points down before a Josh Burridge score and the late penalty from Blakeney-Edwards.

Two penalties from Ben Palmer and a try for Wesley Cope proved only to be enough for a losing bonus-point for South while Dale’s other points came via James Tyson and the boot of Blakeney-Edwards.

Otley ran in four tries as they came from behind to win against Tynedale at Cross Green.

Matt Ouston went over for the first try for Tyne and further scores from David Batey and Guy Pike gave the visitors a 17-5 lead.

Stephen Nolson claimed Otley’s only points in the first period, but the hosts stepped it up after the interval as a penalty from Ben Swift was followed by Nolson completing his hat-trick for the Yorkshire side.

Brett Mitchell then crossed with five minutes remaining for Otley before Smith wrapped up the win from the tee as the hosts scored 27 unanswered points in the second half.

Preston Grasshoppers registered back to back home wins as a late Conor Trueman score sealed a bonus-point victory over Sheffield Tigers.

The hosts led 24-12 at half-time as Paul Millea, Alex Hurst, Sam Stott and James Fitzpatrick crossed, with Pete Swatkins and Henri Packard replying for the Tigers.

Sheffield then went in front after the break as Ed Simmons and Packard dotted down to make it 26-24.

Both sides exchanged converted scores as Trueman’s first effort was cancelled out by Jamie Broadley, but the winger would have the final say as his try six minutes from time clinched the victory for Hoppers.

Macclesfield picked up their second win of the season thanks to this enthralling victory over Leicester Lions, despite ending the game with 14-men.

This will be a welcome triumph for the Blues who are now seven points off safety after a tough beginning to the National Two North campaign.

Marshall Gadd’s side were excellent in the first half and led 25-5 at the interval following scores from Sam Broster, Tom Brand, Jonathan Mason and Josh Redfern, while Aaron Martin touched down for Leicester.

Scores from Myles Hall and Sam Parry, either side of Ethan Godefroy’s effort, kept Macc in control, but the Lions battled back in the final 10 minutes.

Will Roberts and Laurence Warren-West both dotted down, but they could not salvage a second bonus-point even though Mason received a second yellow-card late on for the home side.