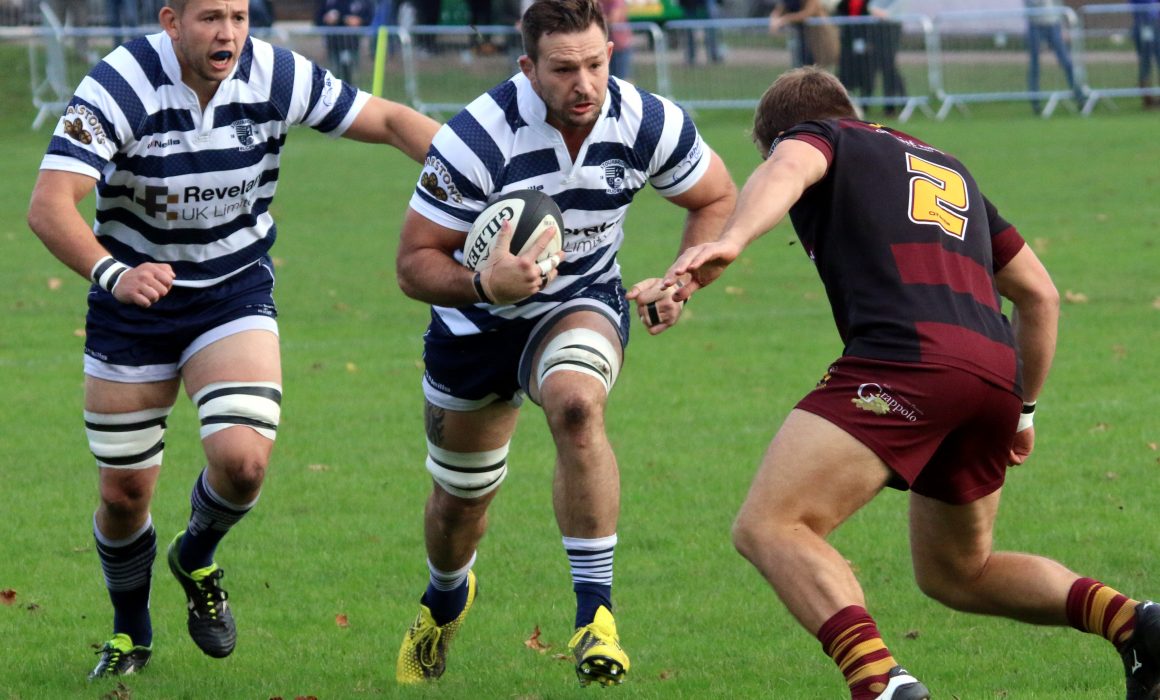 National Two North leaders Stourbridge are aiming to begin the third month of the season by maintaining their 100 per cent record in the division.

Stour battled to victory against Sedgley Park last weekend to secure their ninth successive victory and they now have an 11 point cushion over Tynedale and Hinckley, who sit below them.

The Midlands side travel to Sheffield Tigers this weekend while Tyne and Hinckley are at home to Sheffield and Macclesfield and fourth placed Sedge host bottom of the table Wharfedale.

Rather than this coming Sunday, Stourbridge’s weekend to remember may well be the final fixture in October. It is still early days in the season, but they were able to grind out an excellent win over possible promotion rivals Sedgley Park to move 11 points clear at the top of National Two North.  Neil Mitchell’s men overcame their toughest test of the season to date and now they will be aiming to maintain their 100 per cent start to the campaign when they travel to Sheffield Tigers tomorrow.

The Tigers’ own season has started to spark into life. After fighting off relegation last year, the Yorkshire outfit head into this weekend against the league leaders having won three matches on the bounce. Their recent form has lifted them to eighth in the table and there is certainly a lot to be positive about at Dore Moor. The Tigers have not lost since the beginning of last month – against second placed Tynedale – so they will be hoping to avoid a repeat of that in the first weekend of November.

Tynedale’s season has just started to go off track slightly. Scott Lawson’s men have had a brilliant start to the campaign, but successive defeats to South Leicester and Hinckley has seen them lose touch with table toppers Stourbridge. Surrendering an 18-point lead against Hinckley last weekend would have been incredibly frustrating for Tyne so they will be itching for a reaction when they host 15th placed Sheffield.

The visitors will head to Corbridge in high spirits. After eight straight defeats following promotion from National Three Midlands, the Yorkshire outfit finally got off the mark last weekend after an excellent win over Blaydon. That victory leaves Sheffield six points from safety, but to beat a side recently relegated from National One is an excellent feat. Can Adam Byron’s men pick up another victory against northeast opposition tomorrow?

Hinckley’s remarkable fightback last weekend meant George Chuter’s side moved level on points with Tynedale and continued an excellent beginning to the season for the Midlands club. After promotion to National Two North in 2016, the men from Leicester Road are progressing at a very good pace as they prepare to host Macclesfield tomorrow.

Hinckley have won their last three matches and they have also secured five straight victories at home this term. In fact, they have not lost on their own patch since March so Macclesfield’s task this weekend is certainly not an easy one. The Blues do take the trip to the Midlands having arrested a run of six straight defeats following victory over South Leicester so they will be aiming to secure back to back victories for the first time since April 2016.

Sedgley Park produced an excellent display against league leaders Stourbridge last weekend, but ultimately came away from the Midlands without the result they would’ve wanted. However, Matt Bebbington’s men are certainly on the right path as despite a defeat to Stour, they sit fourth in the table and just a point behind second place. Sedge have won three of their last four games and have not lost at Park Lane this term so bottom of the table Wharfedale have a huge challenge ahead of them.

Dale slipped to the foot of this division last weekend following their fourth defeat in a row against Leicester Lions and James Doherty’s side now find themselves eight points from safety at this early stage of the season. The Yorkshire outfit have not travelled well in this division either, having won just two of their last 20 away matches. However, their only victory of this term came at Sheffield, but they will have to be at their very best to get something from this clash in the north-west.

Sale FC continue to go about their business efficiently. Last year’s play-off finalists currently sit fifth in the league standings and just one defeat in the last month leaves them two points off second place as we begin November. The men from Heywood Road are starting to flex their muscles and at home, they are a force to be reckoned with.

The Manchester-based club have won 19 of their last 20 league matches on their own patch and they welcome a Luctonians side to the northwest who have slipped down to 13th in the table. The visitors are currently going through a min-slump of four straight defeats and head coach Ryan Watkins has said this week that some of his players ‘need a kick up the backside.’ This will be a tough test for the Herefordshire outfit as they aim for their first win since September 30th.

October can be described as a patchy month for South Leicester. After just one defeat in September, Michael Holford’s side were knocking on the door of the promotion places in National Two North, but two wins and two losses over the last four weeks has seen the Midlands side come off the boil slightly. South are now sixth in the table and are seven points off the top two, but one big plus point they can take into their clash with Otley is both of their victories last month came at Welford Road.

In fact, South are yet to lose on their own turf this season and Otley will be aware of the challenge that faces them. The Yorkshire club fell into the bottom three last weekend after a fourth successive defeat and Otley have not tasted victory since the middle of September. Something needs to change for Peter Clegg’s side sooner rather than later as one of National Two’s stalwarts’ aims to move away from trouble.

After a respectable showing in defeat against Stourbridge, Leicester Lions responded in the best way possible by clinching victory against Wharfedale last weekend. It is now four wins from their last five games for Jack Heald’s men who seem to have forgotten about such a tough start to the campaign. The Lions lost their first four matches, but they now host Chester this weekend as a side which is definitely on the up.

The Midlands sides’ next aim is to improve their record at Westleigh Park as they have won just once on their own patch so far and they may fancy their chances of doing just that tomorrow. The reason I say this is because Chester have struggled on the road this term. The men from Hare Lane have won five times this season, but four of them have come at home. Having said this, Nick Joseph’s side suffered just one defeat in October so expect there to be fireworks between two sides bang in form.

Despite an inconsistent month, Huddersfield will still be satisfied with the progress they are making back in National Two North. The Yorkshire side were promoted to the fourth tier in May and currently, they occupy 10th in the table and are five points clear of the bottom three.  Like last season, Gareth Lewis’ men have been excellent at home and they welcome Blaydon to Lockwood Park having won three of their four matches in front of their own supporters.

Like in Round Nine, Blaydon are taking on a side that were two divisions below them last season, but Ally Hogg’s men will be hoping for a completely different outcome this Saturday. The Crows were beaten by Sheffield which put an end to a mini revival for Blaydon who had won back to back fixtures. It has been a tough opening two months for the northeast side on the their return to this level, but they will be aiming to spark their season back into life this weekend as they look to move further away from danger.