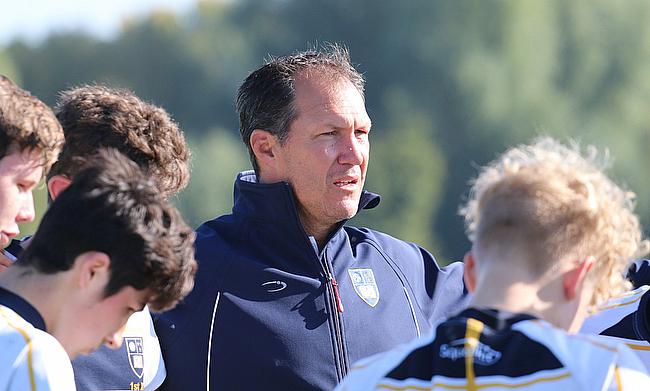 To say that was far from the truth would be nothing short of a lie. His intercept try against Bath in the 2005 Powergen Cup final is still heralded by Leeds Tykes (Yorkshire Carnegie) fans to this day.

Having finished his playing career in Perpignan, Snyman returned to South Africa to work in the construction industry. It wasn’t until around a barbeque that the prospect of coaching first appealed to the former back.

“It was one of my friends, he said to me; ‘Andre, you are being selfish’,” Snyman said. “I was like, should I take that as a compliment or an insult and he asked why don’t I go into coaching and I replied ‘why should I?’ and he said ‘you have got 15 years of rugby experience, all of this knowledge, so why don’t you share it with people?’

“That stuck in the back of my mind and then it started brewing until I was like, you know what, let’s give it a try. I started doing all my levels and ended up coaching at a local club in Durban and I actually started enjoying it.”

Coaching an U19s side in Durban, Snyman quickly became determined to further his coaching journey. He describes his want to progress as a coach in South Africa, along with teams unwilling to hire him due to an apparent lack of experience as a ‘catch 22’, so Snyman was forced to look elsewhere for work.

“The rugby community (in America) is very small, although it is a very fast growing sport,” Snyman said. “They have still got a long way to go to get close to where it should be and I do believe that they have got the makings there to get it there one day with the athletes that they have. Coaching in America was very good.

“We are talking about a country that eight years ago, was proper amateur, not one dollar was spent on the players. It actually costs the players money to play because of all the travel, the flights, the different cities, the hotel, the ground transportation. We worked out that it was between $2500 and $4000 per season for a rugby player to play in America.

“I took the club to back to back Championships and then my kids started playing rugby as well and I needed to focus on them and I decided to step away from senior rugby and started coaching youth and it was like a whole new world for me.”

Now working at Hill House School in Doncaster as Head Rugby Coach, Synman is teaching the game to children from under eights, all the way up to under 19s. He moved to the school at the start of the academic year and has been thoroughly enjoying his time there.

However, it became apparent to the 38 times capped Springbok that he also wanted to coach men’s rugby too. So, after putting out enquiries to get involved with teams in and around the Yorkshire area, it was Huddersfield that eventually got the interest of the South African.

“I realised that I needed to get back into senior men’s rugby coaching to keep myself on track in terms of my coaching development,” Snyman said.“I was putting out feelers and was talking to people and, luckily, Huddersfield was the only club that actually stepped forward and reached out to me.

“Luckily, we had friends in common and I knew Gaz (Huddersfield Head Coach, Gareth Lewis) through another friend of mine that I work with. We had a chat and luckily they had an opening for a backline coach, and I said by all means I would be interested in joining them.”

Finishing 12th last season, Huddersfield ended the campaign six points clear of relegation. Snyman comes to Lockwood Park with a proven track record, his time in America the proof of this, winning three national championships in eight years there.

But now, Snyman is ready for a new challenge. Having never coached at the fourth level in any country, the Bok is looking forward to meeting his new players, although he is realistic in his projections for what the future could hold in West Yorkshire.

“I am excited,” Snyman said. “You have got to understand, these players have still got 9-5 jobs, so they don’t put in the amount of training that other teams do so I am excited to see how they are going to adapt or accept me.