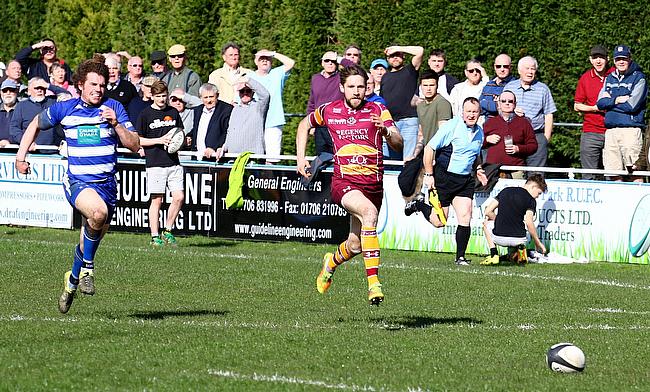 Sometimes the schedule for players and coaches can be unforgiving but as neutrals and followers of National Two North, we have an early season treat on our hands this weekend.

There is little respite for the current top two as Sale FC travel to Sedgley Park in arguably the game of the weekend and if that is the starter, then the main course looks just as good.

In truth, we have number of derbies on hands this Saturday with the pick of the bunch coming from the North East, Cheshire, Leicester and Sheffield while two very ambitions sides in Hinckley and Huddersfield go head to head at Lockwood Park and Stourbridge host Luctonians.

After speaking to new Sedgley Park Head Coach Matt Bebbington during pre-season, he stressed that his side could not look beyond the first month of the campaign due to their lack of consistency last term.  That message was certainly put into practice last Saturday as Sedge produced a commanding display to see off Sheffield Tigers and now, they prepare for one of their toughest tests of the season.

Sale FC are the visitors to Park Lane tomorrow and Jonathan Keep’s side produced the perfect response to their play-off defeat back in May. Sale were beaten by Old Elthamians at Heywood Road but that was not on their minds six days ago as they sent out a clear message to the rest of the division following a comprehensive win over Leicester Lions. If both Sedge and Sale have promotion ambitions this term, they certainly got off to the perfect start and whoever comes out on top this Saturday, will certainly be laying down a marker for the rest of the season.

Sedgley Park and Sale FC are the early pace setters, but a side that will want to be in their positon come the end of the season are Blaydon. The Crows were relegated from National One four months ago, but life back in the fourth tier could not have started any worse for Ally Hogg’s side as they were blown away by Hinckley last weekend. That result would certainly have been a shock to the system and they will no doubt retaliate this weekend when they begin their home campaign against near neighbours Tynedale.

This should be a really tasty northeast derby because Tynedale continue to look strong. After a very positive season under Scott Lawson last term, the Newcastle Falcon guided his side to an opening day win over Chester, who finished a place above Tyne in 2016/17. One of the major plus points for Tynedale last season was their away record. They won eight times on the road and another victory on their travels tomorrow would signify a terrific start to the season for the Blue and Whites.

Chester’s record against sides in the top six last year arguably halted their progress up the division and a defeat to Tynedale last weekend did nothing to dispel that theory. The Cheshire side really struggled to gain positive results against their fellow top two challengers so they will be keen to put that right when Macclesfield visit Hare Lane tomorrow.

Nick Joseph’s side did find consistency hard to come by at times last term and Macclesfield will be looking to capitalise on that this weekend. The Blues returned to National Two North with a comfortable home win over Wharfedale last Saturday and after winning 26 of their last 31 matches at this level, they will be aiming to continue that impressive record if they are to achieve an immediate return to National One.

Huddersfield’s return to this division got off to a very topsy-turvy start against South Leicester last weekend, but ultimately Gareth Lewis’ men were on the wrong end of the result. They were certainly many positives for the Yorkshire side to take into their first home fixture of the season against Hinckley this Saturday and after seeing one record come to an end last weekend, they will be hoping to make it 14 wins in a row at Lockwood Park tomorrow.

That is easier said then done especially with a buoyant Hinckley as their guests. The Midlands side produced the result of Round One as they completely outplayed Blaydon to get off to a superb start to the season. Hinckley were never in danger of being dragged into a relegation battle last term following promotion in 2016 and a victory this weekend would once again suggest that George Chuter’s side can really establish themselves in this division.

Stourbridge’s first half display against Otley would have been exactly what Head Coach Neil Mitchell was looking for. After such a sluggish and tough end to the season for Stour last term, their swagger returned last Saturday and they will be hoping it continues when they welcome Luctonians to Stourton Park this weekend.

One of Stour’s plus points from last season was their home record. The Midlands side won on 11 occasions in front of their own supporters so this will be a tough test for Luctonians tomorrow. However, Ryan Watkins’ side will have been pleased with a hard fought win over newly promoted Sheffield last Saturday and the Lucts will be keen to make it back to back away victories to begin the new term.

Our second derby day of the weekend sees local rivals Leicester Lions host South Leicester at Westleigh Park. The Lions left Heywood Road with their tails between their legs last Saturday as they were outplayed by Sale FC, but the side that finished third last season certainly have the quality to bounce back tomorrow and gain a first with under the reign of Jack Heald.

The Lions won 13 times on their own turf last year and one of those victories did come against near neighbours South Leicester. South lost 29-26 back in December, but overall, a derby day defeat was just a tiny blotch on their successful season. The men from Welford Road finished seventh and began the new campaign on the front foot after an inspired performance from Rickie Aley helped them to a win over Huddersfield. South will now be aiming for some derby day delight.

Following their play-off victory against Rossendale back in May, Sheffield Rugby Club’s website immediately highlighted the prospect of coming up against their near neighbours Sheffield Tigers. Just two weeks into the new season, Adam Byron’s men have got their wish. The visitors will take the six minute journey to Dore Moor this weekend as they look to build on the positives from their narrow defeat to Luctonians.

Sheffield were beaten 32-31 last weekend while their hosts had a much tougher afternoon. The Tigers were soundly beaten by Sedgley Park at home and the perfect response to that defeat would be a derby day win. The hosts have lost two of their last seven games, but considering this a local rivalry, the form guide goes out of the window.

Four points separated these two sides last term and after Round One of the new season, they are right next to each other once again. Otley were outplayed in the first period against Stourbridge last Saturday so will be hoping for a vast improvement in their first home game and they may well be glad to be back at Cross Green. The Yorkshire outfit racked up 11 wins last season, nine of which came on their own patch so they’ll be hoping for a similar affect this term.

Like Otley, Wharfedale’s home record was excellent last season but, their away form certainly held them back. Dale won just once on their travels following relegation from National One and began this season with a defeat against Macclesfield so a second win in just 17 away fixtures could be the catalyst James Doherty’s side need to really progress in this division.