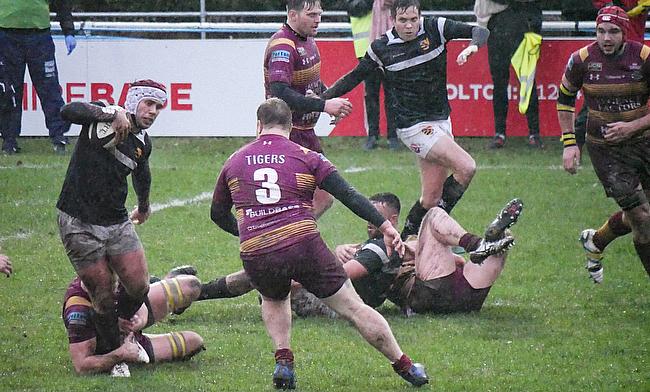 Hull Ionians, Chester and Hinckley all suffered defeats in Round 15 in National Two North as the promotion race took another twist.

League leaders Hull lost away at Leicester Lions, but Chester and Hinckley couldn’t take advantage as they also failed to triumph on their travels.

However, Fylde and Otley both had successful weekends as they maintained their good form to move into the top two picture.

Elsewhere, Preston Grasshoppers’ fine run of results continued as they beat South Leicester while there was a massive win for Macclesfield as they defeated Stourbridge.

Two games did fall foul to the weather on the weekend, though, as Huddersfield v Wharfedale and Tynedale against Peterborough Lions were both postponed.

The Lions led 12-0 at half-time with Alex Wilcockson scoring both of their tries in the first period before Curtis Weaver dotted after the break to complete the win.

It is now two defeats from the last three games for Hull, but they remain four points ahead of the chasing pack.

Chester failed to increase the pressure on Hull Ionians as Otley maintained their excellent run of form following a narrow win at Cross Green.

With Hull losing to Leicester Lions, Chester were unable to take advantage in Yorkshire in tough weather conditions.

All of Otley’s points came in the first period via the boot of Ben Smith and it is now seven wins from their last eight games for Charlie Maunder and Tom Casson’s side.

Hinckley slipped to a narrow defeat against Sheffield Tigers as the hosts bounced back from their loss against Peterborough Lions in Round 14.

The Tigers, who saw a 20-point lead slip away from them last week, took an early lead through Jamie Broadley before Joe Wilson cut the deficit from the tee.

The win in a very cold Sheffield went to @SheffTigersRUFC on Saturday with the only Hinckley points a @Mr_Joe_Wilson penalty – here are the highlights pic.twitter.com/iHqwJJuYr3

The hosts were able to increase their lead on 24 minutes as Thomas Hart touched down and that proved to be the final points scored in this contest.

Fylde have moved up to fourth place in National Two North after defeating Sedgley Park away from home.

The Lancashire club stretched their unbeaten run to six matches in terrible weather conditions at Park Lane while the hosts’ tough run of results continued.

The visitors struck early when Tom Carleton and Adam Lewis both went over, but Sedge managed to get back on level terms when Matt Riley and James Lloyd crossed.

However, Fylde were able to regain the lead which they didn’t relinquish as Carleton grabbed his second before Greg Smith wrapped up the win with a late penalty.

Preston Grasshoppers secured their third win on the spin as they ran-in four unanswered tries against South Leicester at Lightfoot Green.

This was also Preston’s five home victory in a row as Paul Arnold’s side maintained their excellent recent form.

Macclesfield’s upturn in performances continued in Round 15 as they picked up a brilliant win against Stourbridge at Priory Park.

Tries from Sam Stelmaszek and Tom Burden, as well as two penalties from Tom Morton, put Macc 20-8 up,

Nigel Mukarati had gone over for Stour and his side were right back in the contest when Stefan Thorp and Jack Lea both touched down.

Sam Moss scored from close range to give Macc a bit of breathing space, but Jack Spencer’s effort set-up a nervy finish in Cheshire.

However, Marshall Gadd’s side held on for successive home wins and the Blues are 10 points from safety at the halfway point in the season.