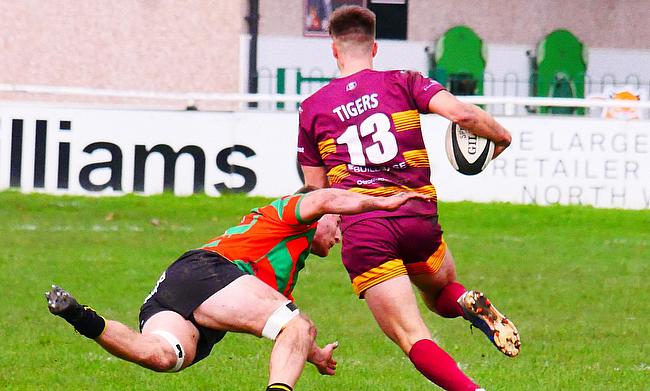 The leading pack in National Two North maintained their positive starts to the season as all three sides picked up victories. (Photo Credit: Glenn Hutton)

Caldy stretched their winning run to six matches as they beat Hull and Fylde remain undefeated after brushing Stourbridge aside. Meanwhile, third-placed Sedgley Park are keeping pace with the top two thanks to a hard-fought win over Hinckley in Round Six.

Loughborough Students have moved up to fourth in the division after they came out on top in a thriller against Luctonians.

Elsewhere in National Two North, Sheffield Tigers’ season roared back into life after clinching a victory against Wharfedale whilst Tynedale thrashed Scunthorpe and both Otley and Huddersfield secured narrow wins.

Caldy secured their sixth successive victory and remain at the top of National Two North after overcoming Hull.

Another great weekend as the @CaldyRUFC senior squad builds momentum going into a tough period for both 1st XV and 2nd XV in their respective leagues. Many thanks to @hullrugbyunion and @BlackburnRugby for the games yesterday and also their great hospitality #squadgoals #oneclub

Tries from Gavin Roberts and Adam Aigbokhae put Caldy 17-10 up at the break, with Hull responding through a Penalty Try and a Reece Dean kick.

Keane Naylor’s effort brought the game level 11 minutes after half-time, but Callum Ridgway and Roberts both crossed to complete the visitors’ bonus-point win.

Fylde remain just one point behind league leaders Caldy as they deservedly beat Stourbridge to extend their unbeaten streak to six matches.

Dan Rundle opened the scoring with a brace for Stour, but Fylde took control with tries from David Fairbrother, Greg Smith, Conor Wilkinson and Tom Grimes.

Fittingly, Fylde had the final say at Woodlands as Gregory powered over for his second to secure an excellent victory for Warren Spragg’s side.

Sedgley Park survived a late Hinckley fightback as the third-placed side secured a fifth win of the campaign in National Two North.

The hosts opened up a 27-5 lead shortly after half-time thanks to tries from Jack Metcalf, Leon Simpson and Danny Openshaw, whilst Steve Collins knocked over two penalties.

A double from Mitchell Lamb to add to Rory Vowles’ earlier effort put Hinckley back in contention, before Bob Birtwell scored on the hour to give Sedge a 19-point cushion.

But Hinckley were able to set-up a tense finale as Joe Wilson and Lamb both crossed, however, the visitors had to settle for two bonus-points as Sedge took the spoils.

Loughborough Students secured back-to-back wins for the first time this season after surviving a surging comeback from Luctonians at Mortimer Park.

The job had looked done and dusted for the Students after a blistering first 40 as Will Kaye scored a hat-trick whilst Joe Browning and Cameron Boon both dotted down for the visitors.

The Lucts started to show shoots of recovery after a chastening opening period as Guy Kirby and Francis Kelly went over, but Owen Waters’ penalty kept the Students in control.

However, Loughborough were made to cling on in this contest as the hosts sparked into life in the final quarter.

Callum Young, Josh Watkins and Cameron Tawik all crossed, but in the end, it was too little too late for the Lucts as the Students saw out the victory which lifts them up to fourth place in the league standings.

Wharfedale’s recent good form was ended in Round Six as Sheffield Tigers returned to winning ways at the Avenue.

Jamie Broadley darted over to level the scores up, however, the hosts held a slender half-time advantage as Jack Blakeney-Edwards landed a penalty.

The Tigers hit back after the interval and took control of this encounter when Mark Ireland converted his own try and slotted a penalty before Henri Packard crossed the whitewash.

Henry Macnab responded for Wharfedale, who trailed by nine points just after the hour, but the away side were able to clinch the win when Tom Hart touched down on 75 minutes.

Wearmouth’s opener was the first of nine tries for Tyne, with the visitors wrapping up the bonus-point after just 25 minutes.

David Batey, Ben Bell and Will Roberts all crossed in the second-half to secure back-to-back away wins for Tynedale.

Scunthorpe’s three tries came from Colin Chapman, Josh Bird and James Walker as the hosts’ wait for their first victory of the season goes on.

Otley held out for a narrow win over Chester as the Yorkshire club secured successive victories in National Two North.

The hosts led 13-12 at the break, but Chester fought back after the interval to regain the advantage at Cross Green.

Two penalties from Joe Rowntree and a try from wing Alex Beaumont put Otley in front at half-time.

Alick Croft and James Lloyd responded for the visitors and Chester were able to move ahead on 47 minutes when Michael Craven surged over.

However, the key moment in the contest occurred seven minutes from time as Beaumont’s second clinched the win for Otley.

Huddersfield sealed their second win on the spin in dramatic fashion after a late try from Kian Stewart clinched an enthralling victory over Preston Grasshoppers.

The hosts thought they had rescued a draw at Lightfoot Green following Jordan Dorrington’s 79th minute effort, but it was heartbreak for the Hoppers as Huddersfield found time to snatch the victory in Lancashire.

Preston were ahead at half-time as Ben Dorrington’s try cancelled out Liam Parfitt’s early score.

Matt Crow and Matt Lamprey both dotted down to put the hosts in a healthy position, but Field mustered up a strong response and they led 22-17 after quick-fire tries from Lewis Workman and Thomas Hodson.

But despite the game heading towards a draw following Dorrington’s score, Huddersfield produced late drama for the second week running to steal a win.