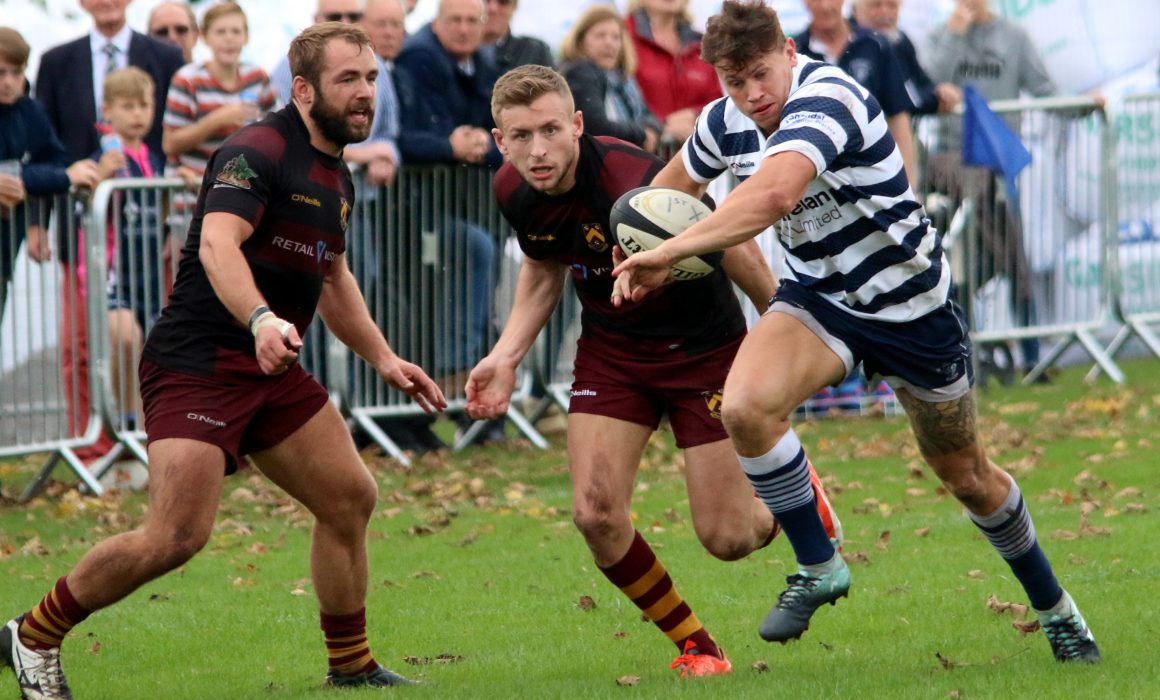 Stourbridge and Tynedale both travel to Leicester in Round Eight as the top two in this division aim to continue their 100 per cent starts to the season when they take on Leicester Lions and South Leicester.

League leaders Stourbridge have been on fire recently and will be confident of gaining victory at Leicester Lions for the first time since 2013, but the Lions are clicking into gear themselves while South will provide a tough test for second placed Tynedale.

10 miles away, fourth placed Hinckley host Sheffield this weekend in National Two North while Sedgley Park will have one eye on proceedings in the Midlands as they take on Luctonians.

Once again in National Two North, we have a Midlands derby on our hands this weekend as league leaders Stourbridge visit Leicester Lions. Stour have not put a foot wrong since the first whistle of the season and they quite rightly sit on top of the pile having picked up maximum points from their first seven games of the campaign. Last time out, they were made to fight for their victory against Huddersfield so Neil Mitchell’s side may well be hoping for a much smoother afternoon at Westleigh Park.

In truth, that ‘smooth afternoon’ is unlikely to happen mainly because Leicester Lions are starting to hit their stride. After a tough opening month of the season which saw the Lions slump to four straight defeats, Jack Heald’s men have turned their fortunes around and they head into this fixture on the back of a trio of wins. The Lions have beaten Macclesfield, Otley and Luctonians to move up to seventh in the table and with confidence oozing, they may fancy their chances of inflicting a first defeat of the season on Stour.

It will certainly be a tricky test for Stourbridge and just 10 minutes down the road, second placed Tynedale will also be in the Midlands this Saturday as they take on South Leicester. Tyne, like Stour, have won all seven of their matches so far this term, but they sit two points behind the league leaders heading into round eight. However, that won’t bother Scott Lawson’s men at this stage of the season and they will be solely focused on their task in hand this Saturday.

South Leicester will be stern opposition for Tyne tomorrow. The hosts lie sixth in the table after a solid start to the term, but I get the feeling that Richie Williams and his coaching staff will be keen just to reignite their campaign. The men from Welford Road have only won one of their last four games which is their worst run of form thus far, so a home victory against a side which is unbeaten will provide a nice boost for South.

Sedgley Park moved up to third in the National Two North table last week following a topsy-turvy affair against Otley. Despite conceding six tries, Sedge managed to clinch their fifth win of the campaign and now welcome Luctonians to Park Lane having won three of their last four matches. That is the sort of consistency head coach Matt Bebbington called for before the season began and it is now up to Sedge to tighten up their defence as they aim to try and close the gap between themselves and the top two.

Looking to put a spanner in the works will be Luctonians. After three wins from five matches in September, October hasn’t quite gone to plan for Ryan Watkins’ men who travel to the northwest on the back of successive defeats against Huddersfield and Leicester Lions. The Lucts had a similar start last year – when they won four from their first six matches – but they failed to build on that and ended up flirting with the drop zone, so Watkins and his squad will be hoping a result against Sedge can get their season back on track.

Hinckley are once again at Leicester Road this Saturday aiming to continue their fine form in front of their own supporters. George Chuter’s side have won all four of their fixtures on home soil this term and in fact, they have not lost on their own patch since the beginning of March. All of this highlights how well the ever improving Hinckley are performing and they welcome Sheffield to the Midlands tomorrow.

The hosts were promoted last year and lost their first seven games of the season, but Hinckley managed to turn their fortunes around. Sheffield currently find themselves in the same predicament so they will be hoping to emulate that sort of recovery this term. The Yorkshire side are winless following their National Three North title winning campaign, but the division’s bottom club have shown signs, on numerous occasions, that a victory is not far away. A trip to fourth placed Hinckley is a tough ask, but there is no doubting that Sheffield will be competitive this weekend.

Following all the expectation ahead of last weekend, Sale FC’s clash with Tynedale failed to deliver on the entertainment front and for the Manchester club, they also couldn’t snatch a victory from their trip to the northeast. A narrow 7-5 defeat may have been frustrating for Sale considering they are now 10 points off the top two, but the men from Heywood Road will certainly still believe they can challenge for promotion once again this term.

Sale are back at Heywood Road this weekend where they have won 18 of their last 19 league games so this may be the worst possible fixture for an out of form Macclesfield. Giles Heagerty’s men have struggled to adapt to life back in this tier of English rugby and as a result, they have lost five of their seven matches and sit just two points outside the bottom three. Added to that, their captain Max Smith suffered a nasty injury last Saturday, but the Blues know that they still have enough quality to turn the tide in their season and a win in Manchester tomorrow would be the perfect start to achieving that goal.

The final whistle last weekend must have been met by sighs of relief and fist pumps in the Blaydon camp. Victory over fellow strugglers Wharfedale was exactly what the doctor ordered for Ally Hogg’s men who will now be aiming to build on just their second win of the campaign. The recently relegated side have found life to tough at this level thus far, but they are back at Crow Trees this weekend aiming to really spark their season into life.

The northeast side currently occupy 14th spot in the division as things stand, but they may fancy their chances of jumping out of the relegation places when Chester visit this weekend. The Cheshire side have won just one of their four matches away from Hare Lane so far this term, but they did win on their travels last weekend against Sheffield. In truth, Chester are having a solid campaign and they will now be keen to translate their excellent home form into another away triumph when they head north this Saturday.

There might have been disappointment for Huddersfield at Lockwood Park last weekend, but the Yorkshire outfit once again proved just how competitive they can be in National Two North. Defeat to Stourbridge ended a three match unbeaten run for the newly promoted side, but Gareth Lewis’ men must be happy with the progress they are making as they prepare to host Wharfedale in round eight.

Field have won twice this term, both coming on home soil, so Wharfedale will take the trip down the A629 knowing that this will be a tough test this weekend. Dale are in desperate need of a confidence boost after falling to a defeat against Blaydon last Saturday, which leaves them six points from safety at this early stage of the season. Dale’s only victory this term came on the road against Sheffield so they will be hoping for some more delight in Yorkshire this weekend.

Sheffield Tigers host fellow Yorkshire side Otley this Saturday aiming to build on an excellent victory against Macclesfield. An inspired performance by Jamie Broadley helped the Tigers over the line in Cheshire as they secured their third win of the campaign and now they will be keen to add to that against an Otley side that is slightly out of form.

Following their defeat against Sedgley Park in round six, Peter Clegg’s men are now without a win in four matches, but they do sit level on points with their hosts heading into this weekend. Consistency and away results have been a problem for the men from Cross Green over the last 12 months and they take the short trip to Dore Moor tomorrow having won just three of their last 16 matches on the road.