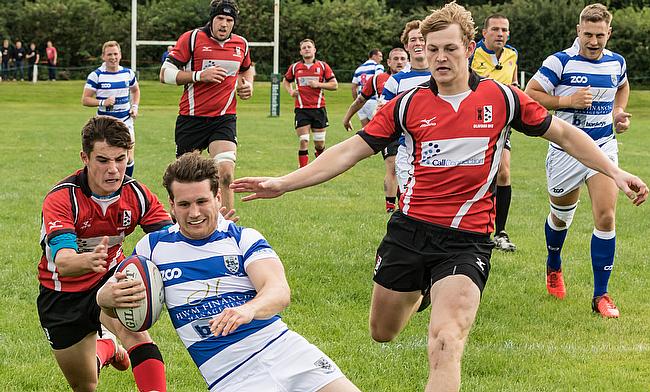 Let’s be clear. After one full season which contained off the field problems and another campaign which showed snapshots of quality, Tynedale seem to be a side that is now on a mission.

While the likes of Sale FC, Leicester Lions and Sedgley Park were all challenging for the top two spots last term, the northeast side were watching from the comfort of sixth position.

They showed last season what they can produce and their first two games of this year are emphasising how strong Scott Lawson’s side can be and how capable they are to mix it with the aforementioned trio.

On Friday night, Lawson helped Newcastle Falcons claim a dramatic win against Sale Sharks and less than 24 hours later, his National Two North side produced a performance against local rivals Blaydon that sent out a strong message to the rest of the division.

I am sure that message will have been received by other possible promotion contenders and the likes of Sedgley Park and Stourbridge also delivered.

Delivering was also the order of the day for Hinckley and South Leicester who made it two wins from two while there were maiden victories for Chester, Otley and Sheffield Tigers.

Tynedale scored five tries as they clinched back to back wins following a victory over local rivals Blaydon.

Robert Palmer, Guy Pike and Joe Mills all went over in the first period for Tyne, with Matt Charlton replying for Blaydon.

After the break, Matt Thompson reduced the arrears for the home side, but that was as good as it got for Ally Hogg’s men as Will Miller and Jamie Blamire went over to secure the win for the visitors.

Stourbridge held on to beat Luctonians at Stourton Park to secure their second victory of the new campaign.

Stour struck twice in the first period via Nigel Mukarati and a penalty try to put themselves 15-3 ahead, but a score from George Amphlett kept the Lucts in touch just before the break.

Louis Silver reduced Stour’s lead to just two points after the restart with his second penalty of the afternoon, but a Joe Heatley try for the home side created some breathing space.

However, Stour’s advantage was to be cut again as a penalty try and a score from Ben Barkley levelled the game up at 25-25, but a late Dan Rundle try for Neil Mitchell’s men earned them a bonus-point win.

Hinckley dominated to record their second National Two North win of the season as they beat Huddersfield at Lockwood Park.

The Yorkshire outfit had not lost at home for just over a year heading into this contest and got off to a positive start as the ever present Joel Hinchliffe slotted over an early penalty.

However, Hinckley too control and centre Tom Wheatcroft burst through the visiting defence at pace for the only try of the first half.

A Steve Harvey score and a penalty try followed after the break as Joe Wilson also kicked nine points to give the Midlands side the win.

Sedgley Park kept their 100 per cent record intact on Saturday, but they were made to battle all the way against rivals Sale FC in a thrilling National Two North encounter.

The hosts scored their crucial third try soon after the restart, but two quick scores from Tom Ailes and Joe Kelly reduced Sedge’s lead to just five points heading into the final six minutes of this contest.

However, a late penalty for Matt Bebbington’s men edged them over the line in what could prove to be a massive result as the season pans out.

South Leicester secured their second win on the spin as they beat local rivals Leicester Lions at Westleigh Park.

The Lions lost just twice on their own patch last term, but could not prevent a defeat in their first home game of this campaign as their near neighbours ran in three tries while Rickie Aley produced another inspired performance with the boot.

Jack Heald’s side also crossed on three occasions, but it wasn’t enough as the Lions slipped to back to back defeats.

Macclesfield were beaten by Cheshire rivals Chester at Hare Lane as the hosts left it late to pick up their first win of the campaign.

Despite taking the lead through Sam Broster’s try, Macclesfield trailed 22-12 at the break with Chester crossing on three occasions.

Chris Jones went over for Macc on the stroke of half-time and his side found themselves level in the second period thanks to a score from Dave Marwick and a penalty via Dan Lomax.

However, Chester nudged over a penalty to move ahead and there were huge sighs of relief from the home crowd right at the death as a forward pass denied Nico Nyemba the chance to snatch the win for Macc.

Henry Roberts’ late try handed Otley a victory over Wharfedale at the Avenue.

Joe Rowntree converted his own try and slotted over a penalty to give his side a 10-0 half-time lead.

Wharfedale were awarded a penalty try before Jack Barnard put the home side ahead on 50 minutes.

However, Otley hit back 10 minutes from time as Roberts dived over following a surging run to seal the visitors’ first win of the season.

Sheffield Tigers got back to winning ways with a hard-fought victory over near neighbours Sheffield.

Pete Swatkins’ early try put the Tigers ahead and they remained in front at half-time thanks a score from Henri Packard and five points from the boot of Mark Ireland.

Fergus Wood crossed for the visitors in the first period and his side went ahead on 67 minutes when Jonny France crashed over.

But Tigers scrum-half Ryan Holmes scored to set up a tense finale, but the home side were able to hold on and clinch the victory.