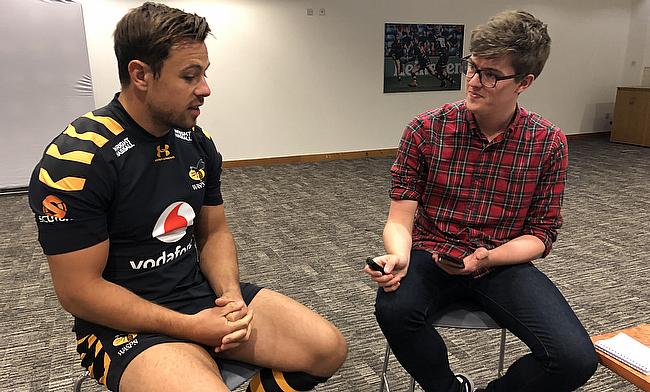 “I seems a while ago now since I played there. It was my first taste of National League Rugby as I left school,” reflects Rob Miller as he discusses his time with Tynedale.

“Obviously I was attached with Newcastle and stuff, but the plan was for young lads to play in the A-League and be loaned out to a club. Half of us went to Tynedale and half of us went to Blaydon.”

Miller was 18 when he donned the blue and white of Tynedale in Corbridge. Some 12 years later, he sits in the Ricoh Arena reminiscing about the club where he played men’s rugby for the first time.

“There was a few other academy lads there alongside me and the guys that played there week-in week-out and it was brilliant. I really enjoyed my time there. Some really great people there, some guys that I still chat to. It’s a real friendly club that welcomed us all with open arms and gave us the opportunity to play at a very good standard in the National Leagues and really get to grips with adult rugby.”

Only playing for ‘Dale for just the one season, Miller was the club’s top try scorer as they gained promotion to what is now known as National 1. Tynedale are now one of two north-east based clubs that play in the National Leagues, with Darlington Mowden Park being the other. With England’s last Rugby World Cup game having been played in Newcastle, Miller believed that it was good for the region to have the national team play there.

👏 Thank you @EnglandRugby for bringing a full international game to Newcastle. Can’t put a price on what this means for rugby in the region. pic.twitter.com/R0s4gZq7UX

“There is some huge teams from the National Leagues, pushing all the way through to Falcons, not just in the north-east, but in the north generally,” continued Miller. “It is a real hotbed of rugby and it’s a really popular sport.

“In Newcastle itself, you’re competing against the football, which is not the easiest thing having lived there for a few years and they are die hard football fans. Falcons have played a couple of games at St. James’ Park, have had really good attendances too and are getting more people involved with the game.”

Playing for Newcastle for two seasons before moving on to Sale Sharks and then Wasps in 2014, Miller made an impact in the Coventry-based side’s campaign last year. Playing on 20 occasions. Wasps capitulated due to a flurry of injuries to their star players.

Like many Premiership clubs Wasps have recruited heavily this summer, bringing in the likes of Malakai Fekitoa, Jeffrey Toomaga-Allen and former Sale FC wing Paolo Odogwu. Miller says that having strong depth is important to squads in order for them to compete, especially in World Cup year.

“I think that’s definitely an important facet of any squad,” Miller said. Having that strength in depth. It’s a long season and certainly with it being a World Cup year, things are going to be a little bit later starting and it is important that we have players in positions where they can step in at anytime.

Many thanks to @WaspsRugby for inviting us down to the Ricoh today to talk to some of the players ahead of the new season!
—
We even got to record a very special podcast with Tom Cruse and Josh Bassett that will be released on Friday! #GallagherPrem pic.twitter.com/rnZfsdQwCp

“What we do have in the squad is the depth and the flexibility of boys playing in a number of positions and I think that suits us. Boys have obviously got their out and out position, but there is a lot of movement around both the forwards and backs that can play a number of positions and that really helps us as a squad over an attritional season.”

Slotting in at flyhalf on four occasions from the start last season, Miller was all too aware of the overcrowded physio room at Broadstreet Rugby Club, where Wasps train. All these injuries proved too much for the club in the end. A lack of consistency in the team meant that Dai Youngs’ side finished eighth overall, missing out on Champions Cup Rugby next season. Despite the obvious disappointment, Miller was upbeat about horizons new in the Challenge Cup and for the upcoming season.

“Europe is a big thing for us next season,” Miller said. “There are a few teams we get to play this year from places we haven’t been before and something that we are looking forward to in European competition. Domestically we want to pick up as much as possible, make the Ricoh a fortress and pick up wins on the road.

“We are really optimistic about the way things are going. We always want to succeed, and we play the game to want to win, and ultimately, win silverware. I think last year we didn’t click quite as much as we wanted or have the same successes as previous years, which was frustrating.

“We didn’t get to where we wanted to be, but we’ve had a good preseason now and with the World Cup it has given us a bit more time to get some new shapes and combinations. We’re looking forward to the season ahead.”