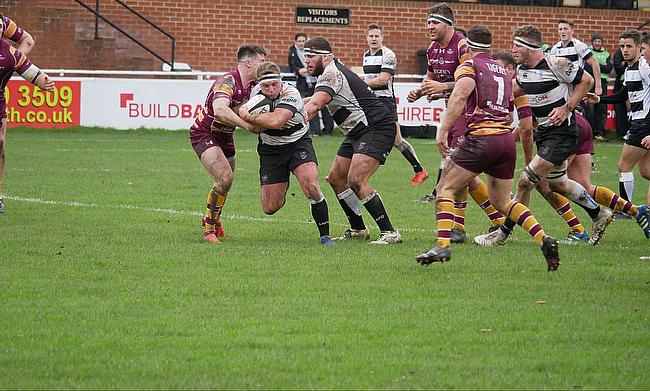 Josh Watkins scored a late try to snatch a crucial victory for Luctonians in a pulsating National Two North match against Hinckley at Mortimer Park.

Luctonians had trailed by 21 points, but produced a remarkable fightback to secure their first win since the middle of January.

The Lucts are also off the bottom of the division and they are now seven points adrift of safety, but they do have three games in hand.

Their relegation rivals all suffered defeats this weekend as Sheffield, Blaydon and Wharfedale were beaten by Macclesfield, Sedgley Park and Sale FC, respectively.

Sale’s win over Dale leaves the Manchester-based club two points clear at the top with a game in hand, but the likes of Sedge, Tynedale and Stourbridge are still firmly in the mix for promotion.

Sale FC beat Wharfedale to stay at the summit of National Two North and dent the Yorkshire outfit’s survival bid.

The league leaders, who have now won 17 straight matches, edged a tight first half as Jack Moorhouse’s try put them 7-0 in front.

Very much enjoyed the trip to the Dales with my old man today. @SaleFC were not at their very best but that dogged defence which has served them well all season ensured they made it 17 wins in a row. Hallmark of a top team #topdogs

Sale are now two points clear at the top with a game in hand, while Dale are still one place above the drop zone.

Sedgley Park continued their march towards securing a top two place as they clinched a bonus-point win against Blaydon, who remain in the bottom three.

Two early scores proved to be the difference as Tynedale secured a thrilling victory over Otley to stay third in National Two North.

Tyne went ahead through James Spencer before Guy Pike crossed to extend their lead.

Declan Dunn cut the deficit for Otley, but Tom Bramwell and Spencer both crossed to give Tyne a 16-point advantage at the interval.

Otley opened the scoring for the second half as Tom O’Donnell barged his way over, but Tyne continued to control proceedings as Bramwell grabbed his second.

The hosts then clicked into gear as Dunn’s effort and a penalty try reduced Tyne’s lead to seven points with five minutes remaining.

However, any thoughts of snatching a draw were dispelled when Bramwell completed his hat-trick to clinch a fourth win on the spin for Scott Lawson’s side.

Stourbridge bounced back from their defeat to Sheffield Tigers as they battled to a victory against South Leicester.

The hosts led 17-16 at the break thanks to tries from Mark George, Rob Forbes and Stef Thorp with South’s points coming via a penalty try and the boot of Rickie Aley.

Aley was on target once again after the restart before Myles Bean latched on to a grubber kick to score and give the visitors the lead.

However, Stour fought back and tries from Jack Lea and Hal Riley, coupled together with Chris Scott’s penalties, sealed victory for Neil Mitchell’s men.

Luctonians came back from 21 points down in the second half to edge past Hinckley in a 10-try thriller.

The home side trailed 29-8 after Hinckley had crossed on five occasions through Gaz Turner, Alex Salt, Callum Dacey, Ben Marshall and Josh Smith to put themselves in the driving seat.

But a double from Frank Kelly, to add to his first half score, brought Luctonians to within nine points of their visitors.

Hinckley extended their lead with a penalty, but tries from Jonny Waugh and Josh Watkins, either side of a Sam Boxhall kick, snatched a much needed win for the Lucts who are now seven points off safety with three games in hand.

Huddersfield strengthened their grip on sixth place with a bonus-point victory over Leicester Lions.

Alex Battye scored the only try of the first period as the hosts went into the break with a seven-point lead.

The second-half was a completely different story as the game sparked into life. Adam Malthouse extended Field’s lead, but the Lions hit back as tries from Oli Tapscott and Tainne Finn reduced the deficit to three points.

However ill-discipline cost the Lions and Huddersfield capitalised to seal the win as Battye crossed for his second before the hosts were awarded a penalty try.

Chester responded to their hammering against Sedgley Park by producing an impressive display to beat Sheffield Tigers at Hare Lane.

The hosts took a 26-0 lead into the break following tries from Jonny Charmley, Rhodri Parry, Guy Ford and Mike Craven.

Further tries from Ross White, Ford – who claimed his hat-trick – and Sean Green wrapped up a fine win.

Ryan Holmes crossed for Tigers, but it was tough day at the office for Jamie Broadley’s side.

Sheffield have fallen to the bottom of National Two North following a narrow defeat against Macclesfield at Abbeydale Road.

A fourth defeat in a row means the Yorkshire club are now nine points from safety while Macc have moved 18 points clear of the drop zone.

Although a try from Jonathan France plus four penalties from Will Hodgson had given Sheffield the advantage, Macc fought back in the final 20 minutes to snatch the win.

Macc took the lead thanks to Charlie Reed’s converted score on 67 minutes, to add to David Marwick’s brace, and the away side maintained the advantage to see out the win.