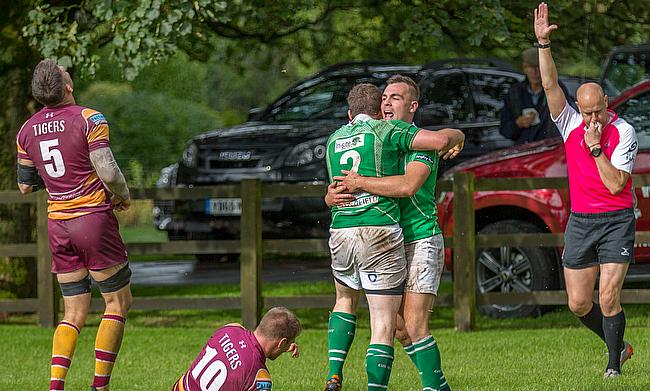 Both Wharfedale and Preston Grasshoppers secured impressive wins in Round Two of National Two North.

Elsewhere, Hinckley are the current table toppers after thrashing Peterborough Lions while Hull Ionians also maintained their perfect start to the campaign.

South Leicester and Chester both secured derby victories while Sheffield Tigers and Otley clinched their first wins of the new season.

A hat-trick from winger Callum Dacey propelled Hinckley to a bonus-point victory over Peterborough Lions.

48-21 the victory over @pborolionsrfc today – @callum_dacey5 got a hat-trick, Hough a double and other tries from Salt, @Mr_Joe_Wilson and Dickinson.

Hinckley scored eight tries in total with Ryan Hough (2), Alex Salt, Joe Wilson and Jack Dickinson also going over, but the visitors were trailing at the break in this contest.

The newly promoted hosts did lead 21-17 following scores from Kaz Henderson, Franco Perticaro and Jake Carter, but that was as good as it got for the Lions as Hinckley dominated after half-time to earn their second bonus-point triumph on the spin.

Hull Ionians earned back to back bonus-point wins as they thumped Tynedale to maintain their 100 per cent start in National Two North.

Scores from James Tincknell and Lewis Minikin followed an early try from full-back Steve Slingsby. After the break, Alex Torkington, Ben Stephenson, Minkin and Joe Makin scored for the I’s.

Tyne touched down through Liam Checksfield and Joe Mills, before Matt Outson’s try at the beginning of the second period proved only to be a consolation for Ben Woods’ men.

A penalty try clinched a late triumph for Wharfedale as they secured an excellent victory over last year’s runners-up Sedgley Park.

Rian Hamilton gave the hosts the lead as Dale centre Rhys Lovegrove opened up the opportunity for his teammate and the winger duly touched down.

Matt Riley scored to drag Sedge back into the game and they were ahead just before half-time as Jamie Harrison darted over.

Match Report – Wharfedale 26 Sedgley Park 19. Thank you for your support today – everyone at the club appreciates it and makes a big difference ?? https://t.co/CuDtoKitue #WRUFC #Nat2N #OneTeam? ?

But, the tables were turned after the break as Hamilton and Lovegrove both dotted down for the home side. Dale led for 15 minutes, however, Sedge hit back through Andy Riley to level the game up.

But at 19-all, the home side snatched the victory late on as they were awarded a penalty try after great work from Oli Cicognini and Matty Houghton.

South Leicester secured the bragging rights in the Midlands as they squeezed past local rivals Leicester Lions thanks to a late score from Timo Koster.

Harry Key scored a try inside the first five minutes for the Lions, but Daniel Ireland and Will Cave both touched down for South to make it 17-7.

The hosts hit back with two scores of their own in the second period as Alex Wilcockson and replacement Laurence Warren-West both dotted down to give the Lions a four-point lead.

However, with one-minute remaining, South stole the points as Koster scored a converted try to seal derby day delight for the men from Welford Road.

Chester posted their second victory of the season as they beat Macclesfield in an all-Cheshire affair at Priory Park.

The visitors found themselves 10-7 down at the break as Scott Robson replied to a penalty from Tom Morton and a score via Pete Board.

However, Chester clicked into gear after the interval as Kyle Joseph and David Ford both crossed while Josh Morris also landed a penalty as the away side maintained their winning start to the season.

Sheffield Tigers earned a deserved win at Dore Moor as they swept aside Stourbridge to claim their first victory of the term.

After tries from Tom Hart and Pete Swatkins left the Tigers 14-3 ahead at the break, a score from Jack Lea helped Stour gain a foothold in this contest before Sheffield regrouped.

Mark Ireland and Rickie Aley exchanged penalties, but it was the hosts who sealed the victory thanks to Edward Simmons’ 70th minute try.

Preston Grasshoppers clinched their first victory of the season in National Two North and did so against local rivals Fylde at Lightfoot Green.

Matt Lampery’s early try for Preston was cancelled out by Chris Briers’ effort, before Tom Davidson landed a penalty for the Hoppers to give them the lead at half-time.

Here’s the match report from the 1st XV’s 18-15 derby win over @fylderugby at the weekend. https://t.co/3dY2uAxxq6

Tom Grimes went over just after the break as Fylde edged in front, but the hosts retook the lead through another Davidson penalty on 54 minutes.

The decisive moment in this Lancashire derby came 12 minutes from time as Preston’s Sam Stott crossed and despite Greg Smith pinging over a penalty for Fylde, Paul Arnold’s men held out to secure a win on derby day.

Otley opened their account for the new season with a victory over fellow Yorkshire outfit Huddersfield at Cross Green.

Two Ben Smith penalties and a Stephen Nolson try put the home side 11-0 up midway through the first half.

However, two penalties from Huddersfield’s Will Milner either side of Lewis Bradley’s try levelled the contest up.

But, with one minute to go, Paul Petchy scampered over to clinch the win for Otley as Field suffered late heartbreak for the second week in a row.