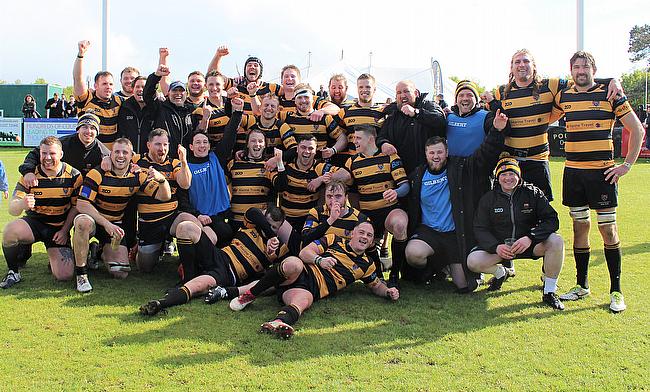 Canterbury clinched promotion to National One for the first time in their history as they came from behind to defeat Chester in the National Two play-off. (Photo Credit: Phillipa Hilton)

Play-off matches are not a place for keeping emotions in check and Saturday afternoon was no different.

That was clear for all to see in Joe Harvey’s post-match interview with an impassioned Jamie Stephens as his  Canterbury side showcased their quality to make history following a 19-10 victory over Chester.

With the clock ticking towards half-time at the Marine Travel Ground, the City Men knew they were in for a battle as they trailed to Mike Craven’s powerful opening try despite controlling proceedings.

A sense of regret may have been the feeling at the interval for Canterbury, but they were able to turn their pressure into points before the half-time whistle as Andy Pratt’s side managed to break down the Chester wall. A score from Dan Smart was the spark they craved and a solid second-half display followed.

First up is man of the match and local lad, @cantrugby’s Jamie Stephens spoke to @joeharvey34 after the final whistle: pic.twitter.com/2Wq3gyzZZe

Winger JJ Murray intercepted a pass to race under the posts and his score was quickly followed by Sam Rogers as Canterbury took control. Sean Green did pull one back for Chester, but after a frustrating start, Canterbury were able to complete the job.

It was delight for the south again as the runners-up in National Two South gained promotion to National One, but also, history was made for a third year on the spin.

Old Elthamians and Chinnor both secured a place in the third tier for the first time in 2017 and 2018 respectively, and Canterbury have added themselves to that list.

What this team have achieved over the last nine months is unprecedented for the club. Head of Rugby Andy Pratt has overseen the journey Canterbury have been on and after 24 wins from their 30 domestic matches, this wonderful season had the perfect ending for the City Men.

Their excellence throughout this campaign may have been overlooked because of Rams RFC’s dominance in National Two South, but Canterbury will deservedly join them in National One next season and there is a lot to admire about this team.

Canterbury have displayed impressive performances throughout this term, especially on their own patch, and there were plenty of signs of their dynamism and creativity early on.

The City Men were commanding the opening exchanges, but after soaking up pressure, Chester wrestled themselves into the lead.

Jan van Deventer’s side had come into this play-off clash following a hard-fought victory over Preston Grasshoppers and their spirit and determination helped them silence a record crowd at the Marine Travel Ground.

Chester’s power up front proved too much for Canterbury and Craven’s physicality saw him barge over the line to put the National Two North side in front.

But, despite the setback, Canterbury channelled the disappointment of going behind in the best possible way.

Chances for Murray and Tom Best weren’t taken, but as half-time approached, Canterbury edged ahead. Their patient build-up was rewarded as Smart located a gap in the Chester defence and darted over.

After a pleasing end to the first 40 for Canterbury, opportunity knocked in the second period and they weren’t about to let Chester get back into this contest.

As the weather changed from sunshine to hail, Canterbury were determined their play-off dream wasn’t going to be washed away. They asserted their control and struck just before the hour as Murray intercepted a Chester pass and surged clear to ensure the hosts had some breathing space for the first time in the match.

Chester were also down to 14-men at this point following Rhodri Parry’s yellow-card and the City Men looked to have killed off their visitors shortly after Murray’s score.  They were thwarted by some excellent defence, but Rogers was on hand to dot down to keep Canterbury in the ascendency.

All season, Chester have fought till the end and they showed their character once again in this National Two play-off. Green managed to touch down for the away side, but there was not enough time left for the men from Hare Lane to mount a remarkable fightback.

At full-time, it was jubilation for Canterbury. Leading up to the game, Pratt reflected on the City Men’s promotion to National Two and described it as like they had “landed on the moon.”

This Canterbury side have now taken one small step in their journey, but this play-off triumph was a giant leap into the club’s history books.