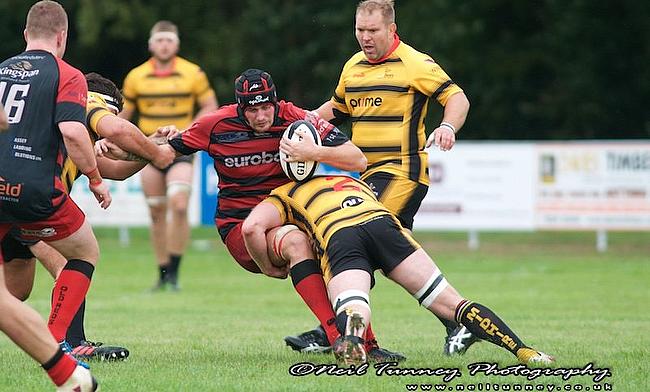 Birmingham and Solihull can close the gap between themselves and Old Redcliffians if they can defeat the Bristol outfit at Scotland Lane this weekend.

The Bees are 11 points behind Old Reds, who currently occupy 13th place in National Two South, so a win for Pete Glackin’s side would enhance their survival chances.

However, Old Redcliffians come into this encounter on the back of successive victories and another triumph for the hosts on Saturday would see them pull clear of the relegation places.

Hoping for a positive result for the Bees might be relegation rivals Guernsey and London Irish Wild Geese. Both teams also sit in the bottom three and this weekend, Guernsey go to Worthing Raiders while the Wild Geese take on league leaders Rams RFC.

As things stand, the Rams are 10 points clear at the summit and below them is where the promotion battle is continuing to rage on.

Second-placed Canterbury are one point clear of nearest challengers Henley Hawks ahead of their respective fixtures with Tonbridge Juddians and Barnes.

If Rams RFC head coach Seb Reynolds wasn’t 100 per cent pleased with their victory over Clifton in Round 14, he certainly was delighted after a scintillating display from his side last week. The league leaders ran in nine tries to thrash Birmingham and Solihull 53-0 and they also extended their winning run to 11 matches in the process.

The Rams are 10 points clear at the summit after their win over a Bees side who currently occupy a spot in the bottom three and their final opponents of the year are also languishing at the wrong end of the table. London Irish Wild Geese face a daunting task at Old Bath Road this weekend as they currently sit 11 points from safety. The men from Hazelwood are bottom of the division having won just one of their last six matches, but if they were to upset the odds this Saturday, it would be the result of the season so far.

We have another Christmas derby in the National Leagues on Saturday and this one should be a cracker as Tonbridge Juddians welcome Canterbury to the Slade. Both of these clubs are hanging around in this intriguing promotion race and it is currently the visitors who are having a ball following eight straight wins. Andy Pratt’s side sit in second spot as things stand, but the City Men won’t want to look too far into the future as they end the year with a tough test against their Kent rivals.

BIG N2S game between TJs and Canterbury this Saturday plus Christmas Jumpers and carols all around us – bring a seasonal smile for a 2.30pm KO and an evening of festive funb! #COUTJs

While Canterbury come into this fixture in fine form, Tonbridge Juddians are also on a good run. They are unbeaten in six matches and Peter Dankert’s side are eight points off their neighbours heading into Round 16. A win for TJs would open up the battle for a top two spot so expect no early Christmas gifts to be exchanged between the two sides on Saturday.

Third-placed Henley Hawks continue to heap the pressure on Canterbury. An excellent second half display against Old Albanian saw Nigel Dudding’s side collect an 11th win from their last 12 games to keep the Hawks just one point off the top two.

The men from Dry Leas are in sensational form as things stand, but hoping to stop them in their tracks will be a Barnes side who will be keen to halt their slide in results. Following a run of five straight wins, the London-based side have lost their last four matches which has just taken the shine off their very pleasing return to National Two South. They currently sit in 11th and after losing 26-24 to Henley back in September, they will want to be on the right side of the result as they aim to return to winning ways before the Christmas break.

What a month December has been for Taunton Titans. Following a difficult November which dented their possible promotion ambitions, Tony Yapp’s side have produced a superb reaction and three wins on the spin has kept them firmly in the hunt for a top two finish. There are no winter blues for the Titans this season – highlighted by their thumping win over Guernsey last weekend – and they will be keen to roll into the New Year on the back of four straight victories.

To do that, they must beat Redruth at the Commsplus Stadium and the hosts are favourites to do just that. Redruth come into this clash struggling for form and their defeat against Old Redcliffians in Round 15 was certainly a disappointing result for the men from the Rec. Pale Nonu’s side have won just one of their last seven games so Redruth could do with an early Christmas boost in their final game of 2018.

Two defeats from their last three games has seen Old Albanian fall away from the promotion picture. A run of four wins between October and November saw Gavin Hogg’s side creep into the top two conversation, but losses against both Canterbury and Henley Hawks means they are now 16 points off second place.

Who doesn’t love a 30-15 before Christmas!!!! @BSERugby Wolfpack working hard before a tough final fixture of 2018 against #oldA’s pic.twitter.com/UbArykRWo0

For now, OAs will just be focused on getting back to winning ways as Hogg hopes for a happy return to his old stomping ground on Saturday. The OAs head coach left Bury St Edmunds at the beginning of last season to take up his current role at Woollams, but the Wolfpack will be no mood to be kind to their former boss. Nick Wakley is now the man in charge at the Suffolk club and since his arrival, Bury’s form has improved. They come into this clash having won back to back away fixtures and now Wakley will be keen to clinch a first home win under his reign.

Throughout the course of this season, there is set to be six Bristol derbies between the three West Country clubs currently in National Two South and so far, Dings Crusaders have a 100 per cent record. Luke Arscott’s side have the bragging rights as things stand and rightly so because they sit eighth in the table at the halfway point in the campaign.

The Crusaders have been very good on their return to this level and they will be hoping for some more derby day delight, especially after successive defeats against Taunton Titans and Worthing Raiders. Clifton come into this clash at Shaftesbury Park with one derby win under their belt, but they have also lost their last two league matches which leaves Matt Salter’s men in 12th place. Granted, they have come against two sides in the current top five so the Lavender and Blacks will be hoping to bounce back this weekend against their near neighbours.

Worthing Raiders boss Jody Levett urged his players to give their fans some ‘festive cheer’ ahead of their game against Dings Crusaders and despite the awful weather conditions at Roundstone Lane, the Sussex side delivered. A narrow 10-0 victory was Worthing’s first win in six matches and they will be hoping for the same outcome when they entertain Guernsey in Round 16.

The visitors on Saturday will be itching for a reaction. Jordan Reynolds’ side currently sit in the relegation places and their survival bid suffered a setback last week when they were thrashed 60-14 by Taunton Titans. It is now no win in nine for Guernsey and they are also nine points from safety heading into this encounter with Worthing. The Chanel Island side could do with the victory, but will their first triumph since October 6th occur this weekend?

At the beginning of December, this clash between Old Redcliffians and Birmingham & Solihull was highlighted as a crucial game before the end of the year and for both sides, it still remains that way. However, the recent form of Old Reds means the pressure is all on the visitors because Saul Nelson’s side have won back to back games which has seen them move nine points clear of the relegation places.

It has been a very successful festive period for the Bristol-based outfit and they host a Birmingham and Solihull team who are currently 11 points behind them. The Bees were thrashed 53-0 by league leaders Rams RFC in Round 15, but their recent victory over Barnes is probably a fairer reflection of what Pete Glackin’s side are capable of. Three of their four wins this term have come away from home, but if they were to add another triumph to that tally this weekend, it could prove to be their most significant victory on the road