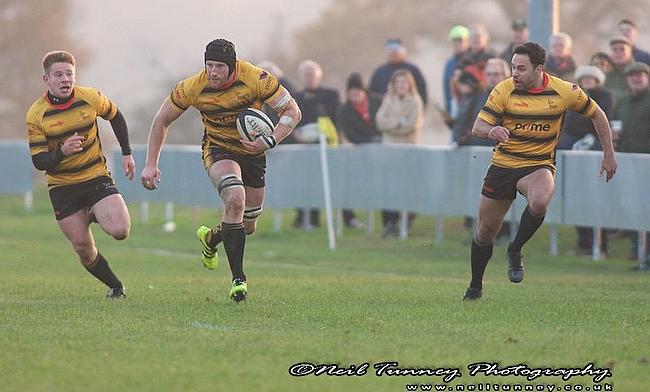 Birmingham and Solihull and Old Redcliffians gave themselves a boost in Round 14 as both secured victories to increase their survival chances in National Two South.

The Bees defeated Barnes away from home to move to within seven points of safety while Old Reds are now five points clear of danger after a brilliant win over Worthing Raiders.

Rivals London Irish Wild Geese were thrashed by Old Albanian while Guernsey were beaten by Henley Hawks at Footes Lane.

The Hawks remain one point outside the top two as second placed Canterbury beat Bury St Edmunds but Rams RFC marched on as the league leaders battled to a 10th consecutive victory against a spirited Clifton outfit.

Elsewhere in National Two South, Taunton Titans claimed an away win at Dings Crusaders and Tonbridge Juddians triumphed over Redruth.

Rams RFC claimed their 10th successive victory as they battled to a hard-fought win against Clifton at Old Bath Road.

Rams dominated the opening 20 minutes with tries from Ben Henderson, Louis Wolf and Jack Steadman giving them a 19-0 lead.

Well done to @Rams_RFC for winning a tough encounter against @cliftonrugby.??Thanks Clifton for giving his a real test today. Good luck for the rest of your season and have a safe journey home??

But, Clifton hit back before the break as two scores kept them very much in the contest against the league leaders.

The visitors then completed the comeback following their third try, but a superb line concluded with Jamie Guttridge touching down and his score ultimately sealed the win for the table toppers.

Canterbury’s excellent run of form continued as they clinched a narrow win over Bury St Edmunds in Suffolk.

Ten points from the boot of the impressive Oli Best as well as tries from Aiden Moss and Sam Kenny secured a seventh win in a row for the City Men, who remain in the top two of the division.

Bury’s upturn in performances continued under Nick Wakley as a try from Patrick Robinson and three penalties via Franco Catuogno earned the Wolfpack a bonus-point.

Converted tries from Alex Bradley and Scott White helped Henley Hawks stay on the heels of the top two as they beat Guernsey away from home.

The visitors took the lead thanks to a Roddy Giles penalty and second-half scores from Bradley and White put them 17-0 up with 12 minutes to play.

Guernsey, who currently sit in the bottom three, rallied to clinch a losing bonus-point as Jason Batiste and Layton Batiste both touched down, following Liam Goodison’s yellow-card for Henley.

Taunton Titans secured back to back victories to remain in the promotion picture as they defeated Dings Crusaders.

Successive victories for Tony Yapp’s side leaves them just six points off second placed Canterbury as we approach the halfway point in the campaign.

No complaints from us – we were beaten by the better team on the day. We’ll dust ourselves off and prepare for next weeks challenge at @WorthingRFC #WeGoAgain #UTD #NoExcuseCulture
????????

But, the Titans were actually behind at the break in this contest as Sam Prior’s first-half try came after Harry Tovey’s effort and a Steven Plummer penalty for Dings.

However, Taunton raced through the gears after the interval as a penalty try, as well as scores from Nicholas Mason, Cory Teague and Jacob Nash, completed the victory for the Somerset outfit.

Tonbridge Juddians earned a dominant win in National Two South as they beat Redruth at the Slade.

Peter Dankert’s side extended their unbeaten run to six games and returned to winning ways after drawing with Worthing Raiders in Round 13.

Benjamin Ashmore got the only try of the first half for the hosts, but TJs were able to increase their lead after half-time as Murray Galbraith-Lowe dotted down.

Redruth produced an immediate response as Jack Oulton sniped his way over, but that was as good as it got for the Reds.

A Duncan Tout try after the hour, along with a penalty from Will Robinson, secured the victory for TJs who remain in fifth place.

Charlie Hughes and Tom Bednall profited the most from OAs’ rampant display as they both crossed twice.

Dan Watt, Peter Warne as well as Alex Chalcraft followed Hughes and Bednall over the line before half-time.

OAs continued to be ruthless after the break as Hughes and Bednall grabbed their second tries either side of Chris West’s effort.

Birmingham and Solihull boosted their survival chances as they edged past Barnes in a hard-fought National Two South encounter.

Tries by Luke Smith and Umraan Jadwat, plus a penalty from Jack Jolly, were just enough for the Bees to claim their fourth win of the season.

Jack Franklin and Robbie Martey both touched down for Barnes, but the hosts slipped to their third defeat in a row while Birmingham and Solihull are now seven points from safety.

Old Redcliffians are now five points clear of the relegation places in National Two South as they defeated Worthing Raiders at Scotland Lane.

Two first-half tries from Robert Cuffe and a penalty from Matt McLean had put Worthing in front as they led 17-15 at the interval.

Henry Bird and Kieran Hill had crossed in the first period for Old Reds and the hosts launched a blitz of 18 unanswered points inside 27 minutes to seal the win.

Scott Parsons and Jermaine Jones both dotted down while Hill kicked a conversion and two penalties.

Worthing could only manage a late try from Curtis Barnes, but this was another crucial win for Old Reds.