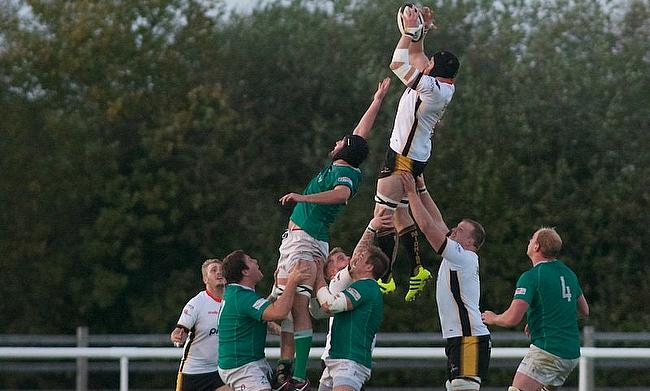 Birmingham and Solihull and London Irish Wild Geese will look to enhance their chances of avoiding relegation when the sides meet on Saturday afternoon.

The Bees are 12 points from safety going into Round 24 and one ahead of rivals Wild Geese as we enter the penultimate month of the season, so a victory for either side who be crucial if they are to mount a revival.

Bottom three rivals Guernsey face a tricky test this weekend as they travel to play-off contenders Canterbury and the hosts are also on a five-game winning run.

After suffering only their second defeat of the season in Round 22, National Two South league leaders Rams RFC bounced back before the fallow week. A good performance against Old Redcliffians saw Seb Reynolds’ side return to winning ways as they maintained their 12-point lead at the top of the table.

With seven games to go, it does seem a matter of when not if Rams will secure the title, but they will not be allowing complacency to creep in when they visit Dings Crusaders on Saturday. The hosts come into this fixture with the table toppers after suffering a defeat in their game in hand against Old Albanian. Last week’s loss was Dings’ fourth from their last five matches and with Luke Arscott’s men also facing a tough run-in, the 11th-placed side will be keen for a positive home performance this weekend.

Despite Canterbury not being in action last weekend, they would have certainly kept one eye on proceedings. With play-off rivals Henley Hawks and Taunton Titans colliding at Dry Leas, Andy Pratt’s side knew their advantage in second place would be cut and now their cushion is only four points after the Hawks triumphed.

In truth, the City Men’s excellent recent form does keep them firmly in control of their own destiny and they will be searching for their sixth win on the spin when they host Guernsey in Round 24. The visitors are at the opposite end of the spectrum to the home side as the Raiders currently prop up the division and find themselves 17 points from safety with seven games remaining. Jordan Reynolds’ men lost all three of their fixtures in February so Guernsey will be hoping to begin March by returning to winning ways, otherwise the threat of relegation will draw closer.

Last Sunday, Henley Hawks entered their game in hand against Taunton Titans knowing what was at stake. It was a crucial match in their bid to finish in the top two and with the pressure on, the Hawks were simply brilliant. Henley outclassed their play-off rivals and Nigel Dudding’s side are now four points behind second-placed Canterbury heading into Round 24.

Henley have now won their last five games and they visit a Clifton outfit who also featured last weekend. Matt Salter’s side left it late to rescue a draw against Birmingham and Solihull and it is a result which could prove decisive as the Bristol-based club moved into the top six. The Lavender and Blacks are on course for their highest finish since 2013/14 and a fifth home win of the campaign would keep them heading in the right direction.

Tonbridge Juddians last met Old Redcliffians at the beginning of November and since then, Peter Dankert’s side have been almost faultless. Just one defeat from their last 14 games has kept TJs in the play-off conversation and currently, they are on a six-match winning run. However, the men from the Slade are still seven points behind second-placed Canterbury, but all TJs can do is carry on focusing on themselves.

The Seniors are back in action this weekend with the 1s at Old Reds (N2S 3pm KO) 2s v Beckenham (Invicta 1 2.30pm) and 3s at Aylesford (5GrainD4W 2.30pm). PLUS the TJs Pink Ladies head to Worthing on Sunday at 2pm for their last league game of the season #COUTJs pic.twitter.com/R3zyNgIgVZ

This weekend, they travel to Bristol to face Old Redcliffians and the hosts will be eager to return to winning ways. Last time out, Saul Nelson’s side were beaten by league leaders Rams RFC, but Old Reds have actually won their last six games at Scotland Lane. Their home form is one of the main factors in why they have steered clear of the relegation scrap and another home success would edge Old Redcliffians closer to securing their third consecutive season at this level.

It was an opportunity missed by Taunton Titans. Last weekend’s rescheduled clash with play-off rivals Henley Hawks saw Tony Yapp’s side fall to only their second defeat from their last 11 games and the loss at Dry Leas has dented Taunton’s hopes of finishing in the top two. With seven matches remaining, the Titans are now eight points behind second-placed Canterbury so the Somerset club must just concentrate on themselves and hope other results go in their favour between now and the end of the campaign.

Taunton will be eager for a reaction at the Commsplus Stadium and they will be searching for their seventh successive home win when Barnes visit on Saturday. In terms of the away side, they sit in 13th place and 12 points clear of the relegation zone heading into March. Joe Gray’s men clinched a crucial win in Round 23 against Dings Crusaders which created some breathing space between themselves and the bottom three and they also beat Taunton 51-38 back in November. If they were to upset the odds again this weekend, Barnes would take a giant step towards confirming their place in National Two South for next season.

It was the perfect start for new Old Albanian head coach James Buckland as his side got the better of Dings Crusaders last week. OAs had been without a victory for eight matches, but they triumphed at Woollams and now Buckland and his side will be keen to build on that result as they look to end a tough season in a positive manner.

OAs’ next assignment is a trip to Redruth, who currently sit just one point behind them as things stand. Nigel Hambly’s men come into this fixture after nearly pulling off an outstanding result against play-off chasing Henley Hawks in Round 23. However, the Reds had to settle for a losing bonus-point, but back at home, they seem to be a different proposition since Hambly returned to the club at the start of the year. Redruth have won their last three at the Recreation Ground and another success in Cornwall would see them leapfrog seventh-place Old Albanian in the table.

Since Bury St Edmunds’ narrow defeat against Taunton Titans in Round 23, there has been some big news which has come out of the Suffolk club. Talented No.8 Tui Uru has agreed to join Gallagher Premiership side Northampton Saints next season, but first, the Fijian will be keen to help his current club end the season strongly.

The Wolfpack travel to Worthing this weekend having lost four of their last five games and that run of form has dented Bury’s chances of finishing in the top six. In terms of the hosts on Saturday, they are also going through a bit of a baron spell. The Raiders have not won since they beat Redruth on January 5th so a first victory for just under two months would be a welcome boost for the 10th placed side.

The phrase gets bandied about a lot when it comes to sport, but this fixture between Birmingham and Solihull and London Irish Wild Geese probably falls under the category of ‘must win’. As things stand, the Bees sit 12 points adrift of safety, but that gap looked as though it would be reduced further against Clifton last week. Pete Glackin’s side were on course for a potentially crucial victory, but they were denied right at the death and had to settle for a draw at Portway.

“We know as a team that if we can get a result at Birmingham, it lets us build from there and generates some momentum."@GeeseRugby fly-half Ollie Turner has chatted to https://t.co/Oymf2Bt7mk ahead of a crucial match in #Nat2s.https://t.co/0xI1s9EE0A

One of the main positives for Birmingham and Solihull to take from their draw is the fact they stretched their unbeaten home run to four matches and they will be desperate to extend that record on Saturday. In terms of their opponents, Wild Geese arrive in the Midlands 13 points from safety and the men from Hazelwood have not won away from home since they beat Guernsey back in November. On that occasion, they were able to defeat a relegation rival so Eddie Fraher’s side will be hoping for the same outcome in Round 24 as they aim to pull of a remarkable escape.