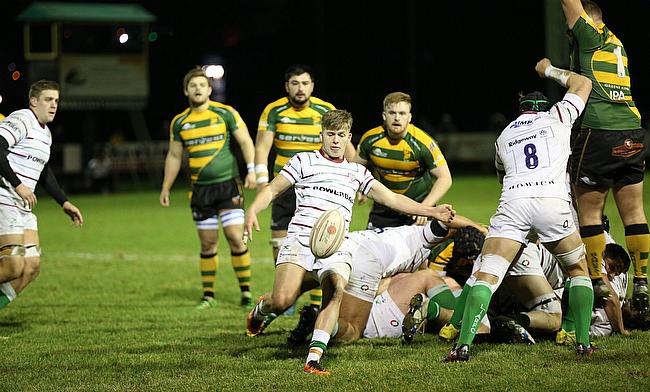 After the hype surrounding the top of the table clash last Saturday, the focus now turns to the other end of this division as teams fighting to stay in National Two South prepare for a vital weekend.

Wimbledon against Clifton and London Irish Wild Geese’s trip to Old Redcliffians are the standout fixtures in Round 21 with all four sides gunning for victory as they battle to avoid the drop.

Elsewhere, fellow strugglers Broadstreet have a tricky test when they welcome Redingensians to the Midlands while Barnstaple host Henley Hawks and Canterbury travel to Redruth.

At the summit of the division, Cinderford will be aiming to stay in control of the title race when they entertain Worthing Raiders, second placed Chinnor go to Tonbridge Juddians looking to keep the pressure on and Taunton Titans are at home to Bury St Edmunds.

Expect an electric atmosphere at Dockham Road this weekend when National Two South leaders Cinderford host Worthing Raiders. Last Saturday, Paul Morris’ side moved nine points clear at the top of the division following victory over title rivals Chinnor and the Cinderford Director of Rugby said he was “in awe” of his sides performance as they clinched their 14th straight win.

Their triumph a week ago means the Foresters are in the driving seat for automatic promotion to National One, but hoping to slow down Cinderford’s march to the third tier will be Worthing Raiders. The Raiders travel to Gloucestershire this weekend on the back of a defeat against Taunton Titans and they once again face one of the top clubs in the division having also played Chinnor and Redingensians in recent weeks. Jody Levett’s side have slipped back into the bottom half of the table following this tough run of fixtures, but having gone so close to gaining a result against Cinderford earlier in the season, they will know they are more than capable of upsetting the applecart this Saturday.

Chinnor Director of Rugby Matt Williams was first to congratulate Cinderford on their victory last weekend. It was another tough home defeat to take for the Oxfordshire outfit who are now nine points off the league leaders and even though both sides stated that the outcome of last week’s fixture wouldn’t decide the destination of the title, you can’t argue that Cinderford are now favourites.

Very much looking forward to Saturday's N2S tie with @ChinnorRugby at The Slade this Saturday at 2.30pm. Supporters please bring suitable footwear as the short walk to pitch side will be muddy for sure pic.twitter.com/ZwnRZEb0Ro

However, Chinnor have won 15 of their last 17 games so do  possess the quality to keep the pressure on Cinderford because there are still 10 games remaining in the season. The Black and Whites know they can’t really afford another slip up and they will have to be focused when they travel to an in-form Tonbridge Juddians this weekend. The hosts, who were promoted last April, are having a fine season and they currently sit eighth in the table following an unbeaten run of seven matches. The men from the Slade have been superb over the last couple of months and they will now be hoping to carry their form into February.

An excellent performance from Paul Davis helped Taunton Titans move back up to third place in the table following their victory over Worthing Raiders in Round 20. Davis’ brace secured the Titans their fourth win from their last five matches which is an excellent response by Tony Yapp’s side after a run of just one victory in six games. Yapp told us before Christmas that their promotion ambitions for this season were over and with 14 points now separating the Somerset club and Chinnor; that looks to be the case.

However, Yapp and his side host Bury St Edmunds this weekend aiming to continue their good run of form while the visitors look to build on an historic win over Redruth. Ollie Smith’s side sealed their first ever win over the Reds last Saturday and it was their third home victory on the spin to leave them seventh in the table. Now, the Wolfpack will be keen to translate their home performances into their displays on the road as they go in search of their first away win since the end of October.

Redingensians are heading into this weekend without a win in three matches, but Seb Reynolds’ side will be hoping a mini-blip in form doesn’t take the gloss off what has been a wonderful campaign for the Berkshire club. The Rams have suffered back to back defeats against Cinderford and Chinnor before drawing at home to Tonbridge Juddians last time out, but they have won 11 of their last 15 matches which leaves them fourth in the table.

The men from Old Bath Road continue to improve as each year passes by in National Two South and aiming to stay in this division with the Rams next season are Broadstreet. A superb win over London Irish Wild Geese last week has given Paul Hurst’s side a fighting chance of beating the drop, but there is still a lot of work to do. Street are 12 points off safety as things stand and with their fellow rivals facing each other this Saturday, a positive result for the Midlands club at home to Redingensians could prove to be crucial in their battle against relegation.

Henley Hawks left it late to beat Old Redcliffians last weekend, but it was a victory which kept them fifth in the National Two South standings. The Hawks have responded well from back to back defeats and head into February looking to end the final few months of the campaign strongly as they continue to build their way back towards the top end of National Two South.

Henley take the trip to Barnstaple this weekend with the hosts keen to string a couple of wins together to be sure of safety for another season in National Two South. Steve Perry’s men are 11th in the table, but a defeat against Clifton last Saturday means they are 11 points clear of the drop zone with 10 games left to play. Granted, that seems like a good cushion to have at this stage of the season, but a second win in eight matches will ease any concerns the Devonshire club may have.

It was another disappointing away outing for Redruth last weekend. A defeat at Bury St Edmunds was their eighth loss of the season on the road and after a brilliant win over Taunton Titans, Pale Nonu’s side once again failed to capitalise on a positive result. However, their away day woes will be put to one side this weekend as they are back at the Recreation Ground where they have lost just once all term.

Their visitors are Canterbury who take the trip to Cornwall following back to back home wins against Old Redcliffians and Wimbledon. Canterbury sit just six points behind Redruth in the table ahead of their clash this Saturday and the City Men will be aiming for another top half finish in National Two South. To do that, they must improve their results on the road as Andy Pratt’s side have not won on their travels for just under few months and a victory at Redruth would be a fine way to start February.

The first of the big games down at the bottom of National Two South comes in London this weekend as Wimbledon host Clifton. The visitors head to the Dons nine points clear of the relegation places having picked up successive home wins against Broadstreet and Barnstaple in what has been a crucial month in their season. This weekend offers up another chance for Darren Lloyd’s men to gain points on their rivals and a second away win of the term could see Clifton create some real breathing space.

As for Wimbledon, they will be desperate to gain a result this Saturday. A narrow defeat against Canterbury last time out saw them slip to the foot of the table and they are now 16 points off safety with 10 games remaining. The Dons have won their last two matches on home soil and a hat-trick of wins in front of their own supporters would once again give them hope of avoiding the drop.

Part two of our crunch Saturday at the wrong end of the table takes place in Bristol as Old Redcliffians entertain London Irish Wild Geese. Old Reds’ Dan Fry told us this week that his side are confident of escaping relegation and pinpoints this game as a crucial match in their fight for survival. As things stand, Saul Nelson’s men are nine points from safety, but back to back home wins gives them a shot of pulling off a remarkable escape.

The team currently occupying the place directly above the relegation zone are Wild Geese. January would have been a frustrating month for the Sunbury-On-Thames side as after victory title challengers Chinnor, they are now winless in three matches with their latest defeat coming against Broadstreet last Saturday. Lee Starling’s men were embroiled in a relegation fight last season, but a win at the Scotland Lane on Saturday would decrease the chances of that occurring for the second campaign in a row.