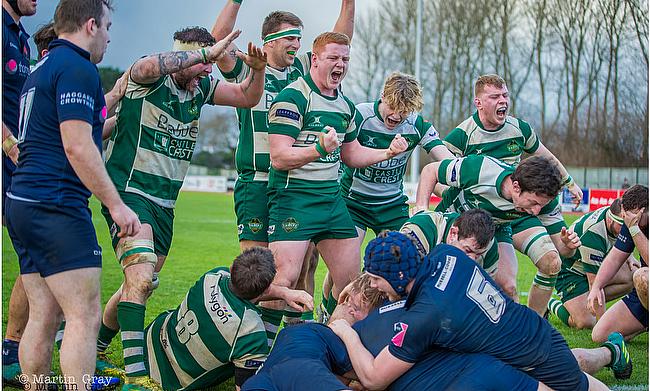 Wild Geese are now 11 points from safety following their win against Dings Crusaders, while a first triumph since the beginning of October means Guernsey are 13 points adrift along with the Bees.

At the top of the division, Rams RFC made it 15 wins in a row as they picked up a hard-fought victory away at Bury St Edmunds and now, they are 16 points clear at the summit.

The race for second place took another twist on Saturday as Canterbury returned to the top two after beating rivals Taunton Titans.

Elsewhere in National Two South, Henley Hawks and Tonbridge Juddians both secured wins to stay in the play-off picture while Clifton’s fabulous month continued with a victory over Redruth.

A tight first half saw the visitors open up a 5-3 advantage thanks to Greg Illingworth’s try, while Jack Johnson landed a penalty for Bury.

The league leaders upped the ante after the break and scored twice through Humberstone and Jak Rossiter, with the former converting both.

And that proved to be enough for the Rams who are now 16 points clear at the top of National Two South.

Canterbury held off a storming comeback from Taunton Titans to return to second place in National Two South.

Taunton will be disappointed to see their six-match winning run come to end, but Tony Yapp’s side did recover well to earn two bonus points.

The City Men were cruising on 47 minutes as JJ Murray, Aiden Moss, Sam Rogers and Dan Smart all crossed to put the hosts 26-7 ahead.

Chris Francis had scored Taunton’s only try, but his second sparked a fightback from the visitors.

Tries from Alfie Petch and Alex Spurdle brought the Titans two within two points of Canterbury, but it was too little too late as the home side secured the win.

Henley Hawks are now just two points behind Canterbury as they beat Old Redcliffians in a thriller at Dry Leas.

George Wood (2), Leo Webb and Sam Lunnon gave Henley a 28-3 lead after an excellent performance from the hosts in the first half.

But after the break, the game was turned on its head as Old Reds went in front following scores from Dan Fry (2) and Henry Bird, plus a penalty try.

With the away side now leading by three points, it was Henley’s turn to respond and Lunnon and Tom Hall both crossed in the final 13 minutes to seal the victory.

Tonbridge Juddians overcame Old Albanian to secure a brilliant victory on the road as they kept themselves in the conversation for the play-off spot.

Tries from Finlay Coxon-Smith, Will Robinson and Murray Galbraith-Lowe put TJs ahead at the break, while Old Albanian responded on the stroke of half-time through Sam Jones.

Alfie Hill scored OAs second on 58 minutes, but the final quarter belonged to the visitors.

Charles Edwards, Hugo Watson and Tom Nicoll all crossed the line to wrap up the win which leaves Peter Dankert’s side six points behind second-placed Canterbury.

Clifton ground out a third win from their last four matches as their impressive start to 2019 continued following a victory over Redruth.

After a first half that saw Brad Barnes and Richard Kevern exchanged penalties, the hosts scored the first try of the afternoon just after the break as Chris Rovery went over.

Clifton continue winning ways with victory over Cornish side Redruth.https://t.co/wioscQrvU4

Redruth responded through Thomas Notman, but a score from Will Pomphrey and another penalty from the excellent Barnes gave Clifton an 18-8 lead.

Connor Gilbert’s try on 63 minutes brought Redruth right back into the contest, but Barnes rounded off a superb individual performance by slotting two more penalties as he guided Clifton over the line.

Andrew Weaver and Umraan Jadwat scored tries as Birmingham and Solihull picked up a crucial win against Worthing Raiders as they continue to fight for survival.

The Bees are 13 points from safety after this victory at Portway and they led 8-0 at half-time thanks to a penalty from Jack Jolly and Weaver’s try.

Jolly was on target from the tee shortly after the interval and the hosts had to wait until the 78th minute to seal the win as Jadwat crossed late on.

London Irish Wild Geese survived a comeback from Dings Crusaders to secure a potentially vital victory in their battle to avoid the drop.

The hosts went ahead through Scott Moore and Ryan Bifield, but Dings responded with two scores before the interval.

Josh Trinham and Marcus Brooker both touched down and the visitors went 19-17 in front shortly after half-time as Harry Tovey crossed.

But their lead lasted seven minutes as George Owen and Moore both went over to put the Wild Geese 12 points ahead.

Brooker reduced the deficit with a score on 68 minutes, but the hosts stood firm to clinch the win which leaves the Wild Geese 11 points from safety.

Prior to Round 19, Jordan Reynolds’ side had won just twice all season, but the division’s bottom club have given themselves some hope of avoiding relegation following Batiste’s last-gasp effort.

Barnes must hate the sight of @GuernseyRFC’s Layton Batiste…

Last season he scored a last-gasp try to win the match at their place.

The hosts began brightly as Lewis Hillier dotted down after five minutes before Owen Thomas’ penalty gave the Raiders a 10-0 lead.

But, Barnes clicked into gear after half-time as tries from Josh Davies and Josh Hammett saw the visitors go in front.

Guernsey’s Sam Steventon exchanged tries with Robbie Martey as Barnes led 21-15, but there was to be late drama as Batiste dotted down before Thomas kept his cool to seal the win which leaves the home side 13 points from safety.