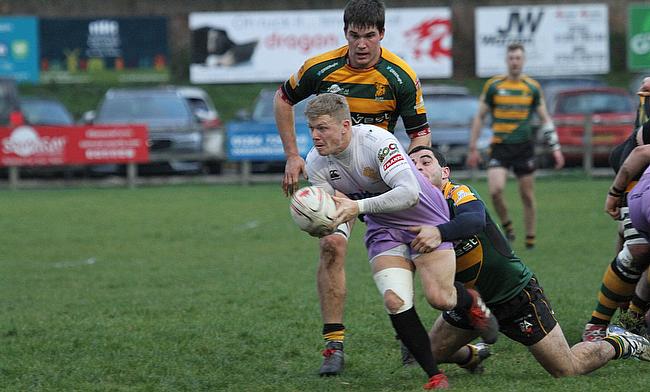 With Dings Crusaders earning promotion back to the fourth tier in 2018, it meant followers of National Two South would be treated to six Bristol-based derbies throughout the course of the season. Photo Credit: (Shawn Pearce)

Last year, Clifton and Dings won three apiece – whilst Old Redcliffians failed to pick up a victory – so it is fitting the first local rivalry of this campaign is between the Lavender & Blacks and the Crusaders on Saturday.

As for Old Reds, they will also be playing in Bristol this weekend when they host early league leaders Henley Hawks while second placed Taunton Titans face Redruth after both teams begun the campaign with victories.

Newly promoted Sutton & Epsom suffered an opening day defeat against Henley and their Round Two task looks to be another difficult one when they take on Tonbridge Juddians. Leicester Lions, Bournemouth, Westcliff and Esher also entered National Two South this term and this quartet of clubs will be keen to get their first wins on the board this weekend.

Henley Hawks began their National Two South campaign in exactly the same manner they ended 2018/19. Nigel Dudding’s side have now won 12 of their last 13 league matches with their first victory of the new season coming against newly promoted Sutton & Epsom.

The Hawks cruised to a 46-5 triumph and will start as favourites against Old Redcliffians on Saturday. In Round One, the hosts were defeated by Worthing Raiders, however, Alex Davies’ side do have the ability to cause Henley problems especially at Scotland Lane.

Another opening day and another victory for Taunton Titans who are making a habit of becoming quick starters in National Two South. Once again, this was an assured display by Tony Yapp’s side in a Round One fixture as the Titans defeated Bournemouth 49-12.

It is another home clash for Taunton this weekend and the second visitors to the newly-named Towergate Stadium are Redruth. It was a war of attrition at times for the Reds last Saturday, but Nigel Hambly was pleased to see his side claim a 10-8 victory over Esher, who have just come down from National One. Both Redruth and Taunton will now be aiming for two wins on the spin to begin the new campaign.

If the first weekend of the season is anything to go by, Tonbridge Juddians will once again be a strong candidate for promotion this year. A comprehensive win over Leicester Lions in Round One means Peter Dankert’s side have now lost only one of their last 23 matches so a daunting prospect awaits newcomers Sutton & Epsom in their opening home match of the campaign.

Jeff Parsons’ side were second best against Henley in the first-half last weekend, but they would’ve been encouraged by a vastly improved 40 minutes after the interval. Undoubtedly, this will be a tough test for the Surrey-based club, but in front of their own fans, they will relish the challenge.

Old Albanian will be hopeful of mounting a top two bid this year after a mixed campaign in 2018/19. With this in mind, James Osborn and James Buckland would have pleased with a very satisfying performance from their side in Round One as they beat Bury St Edmunds Woollams.

Next on the agenda for the Hertfordshire outfit is a trip to the Midlands to take on Leicester Lions. This year was always going to be a challenge with the club moving into the south division and a heavy 41-12 loss to Tonbridge Juddians was not the ideal start for Gareth Collins’ men. However, at home is where a large chunk of their success may come so the Lions will be keen for a victory at TMDP Park on Saturday.

Just like last season, we have been treated to an early Bristol derby as Clifton travel to Dings Crusaders in Round Two. Twelve months ago, Clifton lost 17-11 to Dings so the Lavender and Blacks will want to be on the right side of the result this time around, especially after their dramatic opening win over Barnes.

Matt Salter’s side left it late to snatch a 34-31 victory and the Crusaders did something similar as they clinched a 25-24 triumph against newly promoted Westcliff. It has been a good start from both clubs, but who will hold the first Bristol bragging rights of the season after this weekend?

Bournemouth’s return to National Two South did not get off to a great start in Round One as the Lions lost heavily away at Taunton Titans. Granted, the Somerset club will most likely be challenging for a top two spot for most of the campaign so Will Croker’s men will want to put that result behind them and focus on the visit of Worthing Raiders. The away side secured an excellent 27-20 victory against Old Redcliffians on the opening day and they will hope their experience and quality can guide them to win number two.

Westcliff would have experienced a series of emotions in Round One. After 47 minutes, the newly promoted side were in dreamland as they led 24-8 against Dings, but by full-time, they were left bitterly disappointed as the Crusaders snatched a 25-24 win. Nevertheless, there was plenty on display to encourage Rick Compton and Jacob Ford so they will be hoping their side can produce another positive performance when they visit Bury St Edmunds on Saturday.

For the hosts, they will be eyeing their first win of the campaign after losing out to Old Albanian last weekend. The Wolfpack failed to shake off their early season rust as their slow start to the contest inevitably cost them. Bury will now be keen for a quick beginning to their clash with Westcliff as they aim to get their season up and running.

The uncertainty and unpredictability of National League rugby was display in both of the opening fixtures Barnes and Esher were involved in. The latter have just come down from National One, but suffered a defeat against Redruth whilst Barnes were denied a victory due to a last-gasp try at Clifton.

Granted, Esher have a new look squad and coaching staff so Peter Winterbottom will be keen for his side to gel as quickly as possible if they are to aim for promotion back to the third tier. As for Barnes, it was a positive performance despite the narrow loss in Bristol last week so there will be plus points for Joe Gray’s side to build upon in their first home game of the new campaign.