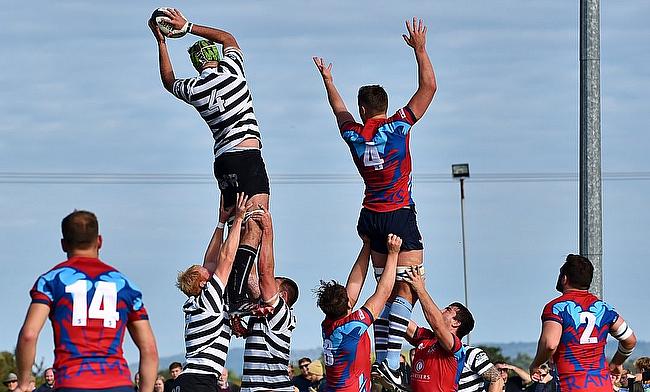 Chinnor can secure their place in the top two of National Two South if they gain just one point from their fixture against Taunton Titans this weekend.

Matt Williams’ side narrowly missed out on second place last term, but they are on the verge of clinching the minimum of a play-off spot this time around as they aim to reach National One.

It is impossible for fourth placed Taunton to finish in the silver medal spot, even if they clinch a victory over Chinnor this Saturday, so their attention will be on ending the season in third ahead of Redingensians who travel to Bury St Edmunds in Round 27.

Above them, league leaders Cinderford can take a huge leap towards automatic promotion if they can come away with a 21st successive victory from their trip to Redruth.

At the other end of the division, both Wimbledon and Broadstreet could be relegated this weekend if results don’t go their way. The Dons host Tonbridge Juddians while Broadstreet have to avoid defeat against Barnstaple.

Paul Morris told The Forester this week that his Cinderford side deserve the National Two South title, but they must maintain their concentration in the final four games of the season. The men from Dockham Road can edge closer to the title when they travel to Redruth in Round 27 as they currently sit nine points clear at the summit and they are also on a 20 match winning streak.

After their trip to Cornwall, Cinderford have games against Taunton Titans, Bury St Edmunds and Canterbury so this fixture with Redruth is arguably their toughest. The reason for this is because Pale Nonu’s side have lost just once at home all term and that came against Chinnor back in November so they are a team that cannot be taken lightly on their own patch. The Reds head into the final month of the season on the back of successive losses, but a win against the league leaders would be the perfect start to April as Redruth aim for another top five finish.

It is second against fourth in National Two South this weekend as Chinnor travel to Taunton Titans aiming to secure a top two finish. Matt Williams’ side require just one point from their trip to Somerset to finish no lower than the play-off position and their recent run of results have highlighted just how determined the Black and Whites are to gain a shot at promotion to National One.

Everyone is away this weekend. @ChinnorRugby travel to @Taunton_RFC 3.00 pm KO. The Falcons travel to @esherrugby 2.00 pm KO for a crucial encounter pic.twitter.com/3CkVNTwCt1

Since their title ambitions suffered a major blow against Cinderford at the end of January, Chinnor have responded with six straight wins and they will head to Taunton full of confidence. As for the hosts, the ever-reliable Gary Kingdom came to their rescue over the Easter weekend as they snatched a victory over Henley Hawks to keep their hopes of a third placed finish alive. The Titans are two points off the top three and a seventh win from their last eight matches would continue their pursuit of the bronze medal positon.

Redingensians will be keeping up-to-date with proceedings at Taunton as that result could well affect where they finish in National Two South this season. It has been a marvellous campaign for Seb Reynolds’ side who remain on course for third place following back to back top half finishes and the Rams have been on an upward curve since promotion in 2015. This weekend, they host Bury St Edmunds aiming to secure their sixth win from their last seven games.

Bury St Edmunds were promoted alongside Redingensians three years ago and they too are now becoming an established National Two South outfit. During their first two campaigns, the Wolfpack’s position at this level was never under threat and despite a change of coach and an inconsistent season this time around, Bury sit comfortably in mid-table once again. Jon Curry recorded his first win as head coach two weeks ago as the Suffolk side beat London Irish Wild Geese and the next aim for the Bury boss will be a maiden win at the Haberden.

There was a sense of déjà-vu about Henley Hawks’ defeat to Taunton Titans on Good Friday. Once again, Gary Kingdom stole points away from the Hawks for the second year on the trot as Henley slipped to their sixth home defeat of the campaign. The loss meant the men from Dry Leas couldn’t consolidate their sixth place position in the table and they are now just one point clear of seventh place Tonbridge Juddians.

Pete Davies’ men will be aiming for their first win for just under a month when they travel to Clifton in Round 27 and while Henley struggled for rhythm in March; their hosts were very much on song as three successive triumphs has lifted them away from danger. Victories over Canterbury, Bury St Edmunds and Worthing Raiders means Darren Lloyd’s side are 10 points clear of the relegation zone with four matches remaining in the campaign. It has been a brilliant turnaround by Clifton and they will be hoping that continues when Henley visit Station Road this weekend.

It has been a wonderful campaign for Tonbridge Juddians. Having won promotion to National Two South 12 months ago, the men from the Slade have taken to life at this level like a duck to water. TJ’s impressive form has hardly wavered throughout this season and their position of seventh place in the table emphasises this point. The club has also taken the step  to develop rugby in the Tonbridge and Kent area by appointing Darren Reaves as their Head of Rugby as TJs continue to head in the right direction.

Happy Easter All
Easy on the chocolate as you have a job to do next https://t.co/BkRdf2vEJK,
If you’re a Wimbledon Fan you will be at the Tonbridge Game and cheering the lads on with gusto.

They head to Wimbledon this weekend having won three of their last four matches whilst for the Dons, victories are becoming a necessity. With four games left to play, the men from Barham Road are 12 points from safety so if results go against them this Saturday, an immediate relegation to the fifth tier could be confirmed. Wimbledon did produce a revival at the start of 2018, but three successive defeats has left them staring at the trapdoor once again. Can the Dons spark another recovery in Round 27?

Worthing Raiders’ high performance team manager Ian Davies is keen for his side to end a positive National Two South campaign on the front foot. Davies, who was speaking to the Worthing Herald this week, has seen the Raiders better their achievements of last season as they have picked up 11 more points this term. Worthing were battling against relegation this time last year, but now the focus is on finishing this campaign on a high, starting with a trip to Old Redcliffians in Round 27.

Worthing have secured two wins from their last five games and Old Redcliffians have also picked up the same series of results. Victories against Tonbridge Juddians and Broadstreet have boosted their chances of survival as they currently sit four points off safety. 26 points from their last 10 matches has given Old Reds an opportunity to avoid an instant relegation back down to National Three and a sixth win of the season at Scotland Road could see them move out of the drop zone this weekend.

Last time out, Canterbury produced a spirted performance to earn a draw against Henley Hawks and it was the sort of display which the City Men have not produced consistently enough in National Two South this season. The draw at Dry Leas ended any doubts that Andy Pratt’s side might get dragged towards a relegation battle as they sit 18 points clear of the drop with a top eight finish still possible.

The result against Henley also ended a run of five straight defeats so Canterbury will be hoping to pick up their first win since the end of January when London Irish Wild Geese visit Kent this weekend. Lee Starling’s side are closing in on a place in this division for the third successive season as they are currently eight points clear of the drop. On paper, the men from Hazlewood have a good run-in with Henley Hawks being the only side in the top half which they have to play, but consistency will be the focus for Wild Geese as they aim to kick off April with a fourth away win of the campaign.

Barnstaple head coach Steve Perry told us this week that his side ‘have shown progress’ this season despite being dragged into a relegation dogfight with four games in the season remaining. Barum had won eight of their 19 matches heading into 2018, but just one victory since then has seen them slide towards danger and now they are just four points clear of the bottom three.

ICYMI | Huge month ahead for teams fighting to stay in their respective division and @BarnstapleRFC are one of the sides hoping to avoid relegation #Nat2s https://t.co/qW7aaebVQB

However, the Devonshire side seem to have a favourable run-in. Fixtures against Old Redcliffians and Wimbledon mean their destiny is firmly in their own hands and this weekend’s clash with Broadstreet is another example of that. As for the visitors to Pottington Road in Round 27, they are on the verge of an immediate relegation. Broadstreet are 16 points from safety so a defeat to Barnstaple this weekend would seal their fate. After the departure of Paul Hurst and the arrival of player/coach Cliffie Hodgson, Street put in a positive performance last time out against Old Redcliffians, but they must avoid a 22nd defeat of the season this weekend otherwise it is curtains for the Midlands club.