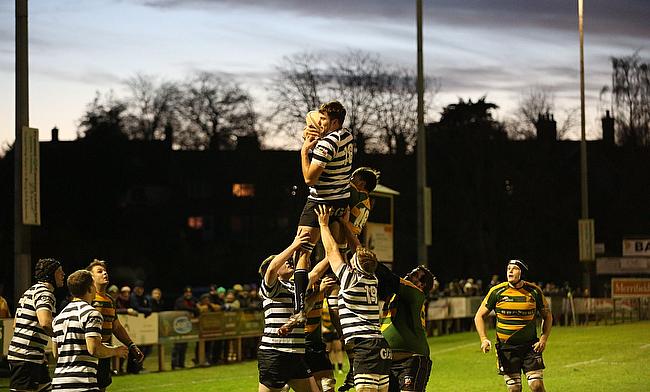 Chinnor remain on top of National Two South as they extended their winning streak to 13 matches, but it wasn’t a straightforward win against Bury St Edmunds.

Matt Williams’ men left it late to secure victory in Suffolk and they are still one point clear at the summit following Cinderford’s commanding win over third placed Taunton Titans. The gap between the top two and the rest of the field is now 13 points as we approach the Christmas break.

Elsewhere in National Two South, Redingensians’ power proved too much for Canterbury, Henley outclassed Worthing and Redruth eased to a win against Tonbridge Juddians.

At the wrong end of the table, Broadstreet won the battle of the bottom two as they defeated Wimbledon while London Irish Wild Geese snatched victory at Clifton and Old Redcliffians saved a draw against Barnstaple.

Chinnor grabbed a narrow win over Bury St Edmunds to stay on top of National Two South as they extended their unbeaten run to 14 matches.

The bonus-point victory keeps them one point clear at the summit of this division heading into the final two games of the year, but they were given a scare by Bury St Edmunds.

Chinnor were 19-12 up at the break after an entertaining first half. Jack Gilding, Jack Rawshaw and George Oliver crossing for the visitors while Bury responded with a Penalty Try and a Sam Bixby score.

Many thanks…a terrific game, and a great team and supporters. We'll miss you next season ?…good luck until we meet again in Thame

The hosts then took the lead after the break as Dwayne Corcoran and Matt Eddison both went over either side of a Chinnor penalty.

The lead changed hands again as Henry Lamont and Alex Gliksten touched down to put Chinnor 34-24 up before Eddison and Corcoran scooted over to level this pulsating game.

But it was the league leaders who had the final say as Bertie Hopkin nudged over a penalty to clinch the win.

Cinderford produced a dominant first half display as they beat third placed Taunton Titans to strengthen their promotion ambitions.

Prop George Porter opened the scoring for the visitors before Alex Frame, Dale Lemon and Matt Lane all touched down to put Cinderford 26-0 ahead at the break.

However, any hope the Titans may have had of getting something from the game were dashed late on as Reuben Norville wrapped up Cinderford’s eighth straight win.

Redingensians continued their recent good form with a bonus-point win over Canterbury.

The visitors made an excellent start as Ellis Jones opened the scoring and the Rams did lead by four points at the break thanks to Ben Henderson’s try.

Jake Rigby barged his way over for the hosts in the first period, but when he was sin-binned in the second half, the away side took advantage.

Henderson grabbed his second while Robbie Stapley along with Henderson and Tom Vooght also crossed as power up front and a clinical edge helped give the Rams the victory.

Ollie Taylor went over late on for the away side to round off the victory while Ricky Mackintosh crossed for Canterbury midway through the half.

Pete Davies’ side were in complete control of this encounter as the Hawks lifted themselves up to sixth in the league standings following their fourth win from their last five matches.

David Hyde scored a brace in the first period while Tom Emery and Jack Robinson also touched down.

Dan Sargent went over for Worthing’s only try in the opening 40 minutes, but they fell further behind shortly after the interval as Xavier Andre touched down.

The Raiders did produce their best period of the game when Liam Perkins and Jonathan Dawe both crossed, but Andre’s second put the seal on the victory for Henley despite Matt McLean grabbing a late bonus-point try for Worthing.

Redruth returned to winning ways in style as they eased to victory over Tonbridge Juddians.

In the first half, the visitors managed two penalties, but they were overwhelmed by Redruth who secured their bonus point before the break thanks to scores from AJ Cant (2) and Edward Pascoe as well as a Penalty Try.

The Reds continued their rampant performance after the interval as Robert Coote, Kyle Marriott and Matt Bowden all crossed to put the icing on the cake for Pale Nonu’s men.

TJs did have the final say on proceedings as Luke Bellinger added to Nathan Holmes’ first half kicks, but it was tough afternoon for the Kent outfit.

Old Redcliffians snatched a dramatic draw against Barnstaple to keep their hopes of beating the drop alive.

Barnstaple led 7-3 after a tight first half as Jordan Petherbridge’s converted try cancelled out an Old Reds penalty.

The visitors crossed shortly after the break to bring the game level before they moved seven points clear with their second try of the afternoon.

However, tries from Gwyn Parks and Luke Berry looked to have won the game for Barum, but a late score from Old Reds snatched a share of the spoils.

Buzzing to get that 5 point win !??? @LondonIrishARFC

Mitch Spencer added a fourth try for the hosts, but a converted Reon Joseph score cut the lead back down to five points.

Broadstreet handed themselves a lifeline in their fight for survival as they clinched a narrow victory over fellow strugglers Wimbledon.

A try from Rhys Morgan and penalty from James Doe put the Dons 10-5 up at the break, with Ryan O’Neil crossing for the away side.

Dale Glover and Cliffie Hodgson went over for Street to give them a 10-point lead, but a try from Andy Hore set-up an intriguing final quarter.

Hodgson landed his second drop goal of the afternoon and also saw his side go over for a crucial try to put Broadstreet 30-17 ahead and despite a close range try from the Dons, Paul Hurst’s men held out for what could be a vital victory.