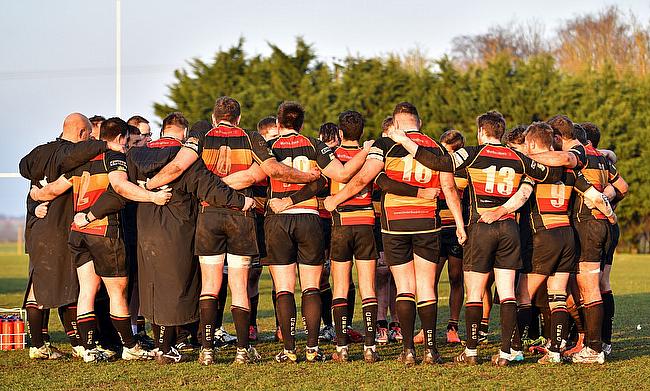 Last week, Cinderford narrowed the gap at the top of the table to just one point following their bonus-point win, but they face a tough test of their promotion credentials in Round 14 of National Two South.

Paul Morris’ men take on third placed Taunton Titans and a victory for the Gloucestershire side would put them in a strong position, alongside Chinnor, in the battle for a place in National One. However, the Titians will have other ideas as they will be desperate for a win to reignite their season after a tough few weeks.

Keeping close tabs on matters at Dockham Road will be league leaders Chinnor who remain unbeaten as they head to Bury St Edmunds this weekend. Meanwhile in the top half, Redingensians travel to Canterbury, Henley Hawks host Worthing Raiders and Redruth will be searching for a win against Tonbridge Juddians.

Down at the wrong end of the table, Wimbledon and Broadstreet clash in what could be a vital fixture in the battle for survival while Clifton take on London Irish Wild Geese and Barnstaple entertain Old Redcliffians.

Chinnor may well have scored 444 points this season, but it was their defensive performance against Taunton Titans in Round 13 which helped the league leaders maintain their unbeaten start to the season and stretch their winning run to 12 matches.  A narrow victory over the third placed Titans saw Chinnor stay on top of the division and they will need to keep performing especially with second placed Cinderford now just a point behind Matt Williams’ side.

Next up for the Oxfordshire outfit is a trip to sixth placed Bury St Edmunds. Ollie Smith’s men will be glad to be back on home turf this Saturday after back to back away defeats including last week’s loss to Redingensians. In truth, the Wolfpack will be pleased with the progress they have made in the opening half of this season under the guidance of Smith and Kevin Maggs, but victory against Chinnor would certainly be the result of their campaign so far as they aim to cement themselves in the top half of the table.

As mentioned above, Cinderford are doing all they can to try and make Chinnor buckle under the pressure. Since Paul Morris’ men were beaten by the league leaders back in October, the Gloucestershire side have been faultless; winning their last seven matches to keep their promotion push on the right track. Having been relegated from National One in 2016, the men from the Forest are now mounting a serious push to regain a spot in the third tier and they can take a big step to achieving that when they take on Taunton Titans this weekend.

Taunton are still in this promotion battle, despite just one win in their last four games. Once again, Tony Yapp side’s inconsistencies are haunting them after a scintillating start to the campaign which saw them win their first nine fixtures. They are still only eight points behind Cinderford, but a win in Somerset this weekend would be massive for the Titans because if they were to lose just their second game at the Commsplus Stadium, then another promotion challenge could be all but over.

After negotiating their way through a fourth v fifth battle last weekend, Redingensians have the same assignment in front of them once again this Saturday as the Rams travel to Canterbury looking to further strengthen their position in the top four of National Two South. Their victory over Bury St Edmunds in Round 13 was their seventh from their last eight matches as Redingensians continue their fine progress in the fourth tier of English rugby.

Next, they take the trip to the Marine Travel Ground with the hosts aiming to move above Owen Root’s men. Canterbury are just three points behind the Rams following two hard fought victories against Henley Hawks & London Irish Wild Geese and the City Men have also won five of their seven matches on home soil. Who will come out on top in Kent this Saturday?

Henley Hawks produced an excellent second-half display to see off Clifton last weekend to continue their encouraging recent form. Pete Davies’ side have won three of their last five matches which has lifted them to seventh in the table as the Hakws prepare to welcome Worthing Raiders to Dry Leas this Saturday.

The visitors are also going through a purple patch of form. Victory over Old Redcliffians in Round 13 saw Worthing clinch three successive victories for the first time since September 2015, but in terms of the picture for this season, it is now four wins from their last five games for the Raiders. In truth, after such a tough run of fixtures against some of the top sides in the division, this was the perfect response for Jody Levett’s side and with confidence high at Roundstone Lane, Worthing will fancy their chances of moving into the top half of the table this weekend.

It has been a difficult few weeks for Redruth. Pale Nonu’s side have not won for over a month and it is the first time the Reds have lost three successive games since 2014. This mini-blip in form means they have slid away from the frontrunners and they now find themselves eighth in the table with their next fixture coming against Tonbridge Juddians at the Recreation Ground.

One of the major plus points for Redruth this season is their home record. They have lost just one of their seven games on their own patch, but their visitors in Round 14 travel to Cornwall in fine fettle. TJs have definitely adapted to National Two South because after 13 matches, they sit 10th in the table having won three of their last four fixtures. The men from the Slade are heading in the right direction and if they keep this sort of form going, it will be an enjoyable Christmas period for the Kent-based side.

Barnstaple’s season and a half in National Two South has always been highlighted by their performances at Pottington Road, but last week, they picked up their second away victory of the campaign as they overcame the 14-men of Broadstreet. Steve Perry’s side fought off relegation last term, but this year, they are in the safety of 11th place as things stand and look set for another campaign in the fourth tier of English rugby.

Out of Barum’s 15 wins at this level since September 2016, 12 have them have come on their own patch so Devon will be a tough place to visit for Old Redcliffians this Saturday. The Bristol-based club are currently 14th in the table and 11 points adrift off safety, but a recent victory over Broadstreet and two bonus-points away at Worthing have just given the men from Scotland Lane a bit of hope that they can dig themselves out of trouble. Old Reds are back on the road this weekend as they aim to continue picking up points in their bid to avoid immediate relegation back to the fifth tier.

London Irish Wild Geese will be hoping to return to form this weekend when they travel to Gloucestershire to take on Clifton. Wild Geese had been on a decent run of four wins from nine matches, but back to back defeats to end November and begin December have just halted their progress slightly.

Lee Starling’s side sit 12th in the table, just two points and one place above their hosts. While the visitors are struggling for consistency, Clifton are finding it hard to claim frequent victories which hasn’t been helped by injuries. The Lavender and Blacks have won just one of their last six matches, which leaves them nine points clear of the drop, but they have the opportunity this weekend to claim an early Christmas present by securing their fifth win of the campaign.

The bottom two sides in National Two South clash in Round 14 as Wimbledon host Broadstreet. The Dons face the prospect of being cut further adrift at the bottom of the table this weekend, but as things stand, they are 21 points from safety following their 13th straight loss last Saturday. Since promotion to this division for the first time in the club’s history, Wimbledon are yet to produce a solid 80 minutes of rugby, but snapshots of their qualities will give them hope going into this weekend’s fixture.

Defeat for either side would be hugely damaging because Broadstreet are 15 points adrift as they travel to London this Saturday. Their loss against Old Redcliffians was followed by them losing to Barnstaple last weekend, but Paul Hurst’s side now have an opportunity to take points off one of their rivals as they look to try and pull off a great escape. The Midlands club take the long trip south aiming for a crucial and possibly vital second win of the campaign.