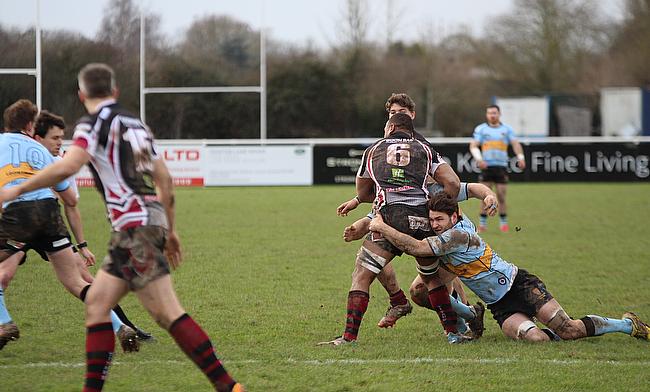 This was very much the case on Saturday as between the two sides they racked up 142 points and conceded just 20.

Their victims this week were Henley Hawks and Barnstaple, but they proved no match for the current top two in this division.

They are now the only teams undefeated so far this season, but hot on their heels are Chinnor after a fine win for Matt Williams’ side.

Paul Morris’ side were dominant, scoring five times in the first period including a try apiece for Nathan Taylor and Harry Hone.

Terence Babarinsa, James Moffat and Dan Broady scored for the rampant visitors in the second-half.

The aforementioned Moffat also landed 10 conversions, while Henley’s points came via Harry Burn and Tom Emery as well as the boot of Connor Murphy.

Gary Kingdom also finished with a point’s total of 20 as the Titans raced clear of Barnstaple after Jacob Murphy’s early penalty.

Kingdom kept the scoreboard ticking over after the break, but all the hard work was done in the first period for Tony Yapp’s side who maintained their 100 per cent start to the campaign.

Chinnor powered their way to a second victory in a row after running in seven tries against London Irish Wild Geese at Hazelwood.

Harry Casson completed his hat-trick to put Chinnor 31-5 ahead at the break after Kieran Goss, Henry Lamont and Jamel Hamilton had also crossed.

George Owen dotted down just before the interval for the hosts, but following the restart, Chinnor extended their lead as Jonny Bentley glided over.

Harry Rowlands got a second for Wild Geese following a yellow-card to Lamont, but Chinnor responded yet again as Hamilton went over for his brace.

The home side did go on to salvage a bonus-point with Pete Hodgkinson scoring one of their final two tries, but it was another tough day at the office for the Geese.

Redruth returned to winning ways, but had to battle hard for their victory at home against Wimbledon.

After Rhys Morgan’s early try had put the visitors ahead, Ethan Pattison, Sam Parsons and Robert Coote all scored to put the hosts 19-5 up at half-time.

A penalty from James Doe kept Wimbledon on the coattails of Redruth, but the Reds wrapped up the win 11 minutes from time as Jack Simmons dotted down.

The away side did have the final say though as Ben Brooks went over, but it wasn’t enough for their first point of the season.

An explosive period in the second-half was enough for Redingensians to inflict a first defeat of the season on Worthing Raiders.

Tries from Tom Vooght, Robbie Stapley and William Morrison gave the away side a 19-13 half-time advantage, with Matt McLean scoring all 13 of Worthing’s points.

After the break, McLean was on target with the boot once again to cut Redingensians’ lead to three points, but the visitors then took the game away from the Raiders.

Replacements Craig Nightingale and Gavin O’Meara both crossed before the Rams were awarded a penalty try to make it 40-16.

Sam Hampson came off the bench to score for Worthing and they too claimed a penalty try, but an impressive spell for the Redingensians was enough for them to secure victory.

Canterbury sealed back to back victories as they produced a commanding display to see off Broadstreet at the Marine Travel Ground.

The afternoon started promisingly for the visitors as Jack Gibbons crashed over, but from there, it all went downhill for Street.

Tries from Tom Best, Kieran Thompson and Harry Sayers gave the City Men a 19-7 lead at the break and they stepped it up a gear after the interval.

Sayers dotted down his second soon after the restart and a score from Charlie Kingsman and a brace from debutant Ryan Roach put the icing on the cake for Andy Pratt’s men.

Tonbridge Juddians made it successive away victories following this triumph over Clifton at Station Road.

A converted score from Ben Ashmore and a penalty via the boot of Nathan Holmes helped the National Two South newcomers to a 10-7 lead, with Harry Butland crossing for Clifton.

Richie Bent’s touchdown was swiftly cancelled out by Callum Roberts, but the decisive score came on 55 minutes as Will Ward dotted down to seal the win for TJs.

Bury St Edmunds claimed consecutive National Two South wins for the first time since March as they came from behind to beat Old Redcliffians in Suffolk.

The away side led 13-6 at the break after a try from Kieran Ward and eight points from the boot of Ash Groves.

Liam McBride kicked Bury’s first half points and got the ball rolling with another penalty shortly after half-time, but the ORs extended their lead through a Sam Hewick score.

But, Bury sparked into life as Sean Stapleton dotted down their first try of the day and the home crowd were soon cheering their second score as Chris Snelling darted over.

The hosts were now in control and clinched the win when Max Kohler crossed the whitewash late on.