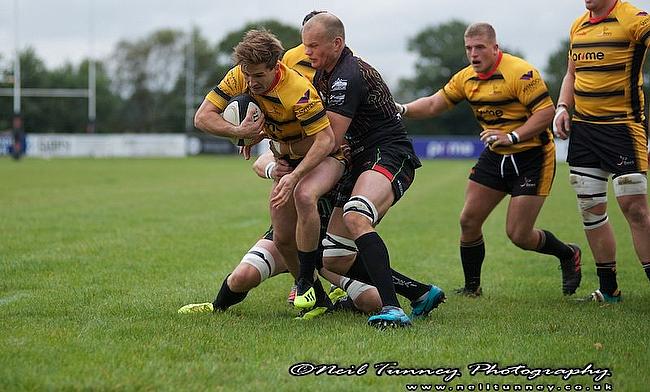 Clifton host Birmingham and Solihull at Station Road in Round Seven with both sides aiming for a welcome victory at this early stage of the season.

The home side on Saturday are three points above the relegation places as things stand and a third triumph of the season would be a boost for Matt Salter’s men.

As for Birmingham and Solihull, they were promoted from Midlands Premier in April and the Bees currently find themselves five points from safety so they will be eager for the victory this weekend.

Rams RFC returned to the top of National Two South in Round Six after a battling victory over Barnes. Seb Reynolds’s side had been dislodged by Taunton Titans, but the Berkshire club are back at the summit after five wins so far this term. The early league leaders welcome newly promoted Guernsey to Old Bath Road this weekend and the visitors will be in high spirts when they arrive at the home of the Rams.

MATCH PREVIEW: Raiders vs @Rams_RFC @jordanrbadger10 makes a stack of changes to the squad, some due to further injuries, such as Morisio who's shoulder knock was worst than first thought & also as he looks to rotate new players into the squad.https://t.co/UELYEABmbj

Jordan Reynolds’s men endured a difficult first four games after earning promotion to this division for the first ever time in Guernsey’s history, but the Raiders come into Round Seven having secured back to back victories against Barnes and Clifton to move out of the bottom three. The Channel Island side will be pleased to have beaten two teams who are in a similar league position to themselves, but this fixture with Rams RFC will be their toughest examination to date.

Taunton Titans remain level on points with Rams RFC after fighting their way past London Irish Wild Geese last weekend. What looked like a straightforward fixture on paper for Tony Yapp’s side, the Titans had to really work hard against a stubborn Wild Geese outfit to seal their fifth win of the season.

The Titans are back at the Commsplus Stadium this weekend when they entertain Henley Hawks and Nigel Dudding’s side sit sixth in the table after a hard-fought win over Dings Crusaders last Saturday. The Hawks have won their last two games which means they will head to Taunton with momentum behind them and they were also victorious in this corresponding fixture last November so Henley will be hoping for a similar outcome in Round Seven.

Redruth remain hot on the heels of the top two after securing a narrow win over Birmingham and Solihull in Round Six. Pale Nonu’s side have now won three games on the bounce to keep themselves firmly in the promotion picture at this early stage of the season, but they face another team full of confidence this weekend when Canterbury visit the Recreation Ground.

The City Men arrive in Cornwall having won four of their last five games and Andy Pratt’s side are looking like a force this term. Canterbury did lose to Taunton Titans in Round Five, but they responded by beating Worthing Raiders last Saturday which leaves them just a point behind Redruth going into this clash. The hosts have lost just two of their last 17 matches on their own turf, but Canterbury look more than capable of getting a result in the south west.

Tonbridge Juddians enter Round Seven joint top of the form the guide. Peter Dankett’s side have won their last four matches and the only other team in the division to match them for recent results is second placed Taunton Titans. In terms of TJs, they currently occupy fourth spot in the division after stringing together some excellent performances over the last month and they will be favourites to make it five victories in a row when they host Barnes on Saturday.

Whilst Tonbridge Juddians are flying, Barnes are having contrasting fortunes. After their opening day win over London Irish Wild Geese, they have failed to taste victory again having lost their last five games ahead of this clash at the Slade. However, the newly promoted outfit did produce a very encouraging performance against league leaders Rams RFC last weekend so Barnes will be keen to carry the positives from that display into this fixture with TJs as they look to reignite their campaign.

Old Albanian’s Tom Bednall was named National Two South’s Player of the Week on Tuesday as he steered his side to victory over Old Redcliffians in Round Six. The fly-half kicked 14 of OAs’ 19-points as Gavin Hogg’s side began October with a win after a satisfactory return to this level. OAs were relegated from National One in April and currently find themselves in seventh place, but they are only six points off the top two as they prepare to take on Dings Crusaders this Saturday.

OAs and Dings were separated by a whole division last year, but the Crusaders have enjoyed their start to life back in National Two South. Luke Arscott’s men sit 10th in the table after three wins from their first six games and in fact, one more triumph for the Crusaders would surpass the total number of victories the club achieved the last time they were in this division in 2014/15. Can they achieve that against Old Albanian this weekend?

Worthing Raiders would have been disappointed to fall to a defeat against Canterbury last weekend. After an excellent win over Birmingham and Solihull in Round Five, the Raiders’ momentum was halted once again by another away defeat. However, Jody Levett’s men are back at Roundstone Lane on Saturday and the eighth placed side have won 12 of their last 17 games on their own patch.

That impressive record will be put to the test against London Irish Wild Geese this weekend and the visitors are desperate for a victory. Wild Geese currently prop up National Two South after six straight defeats, but Lee Starling’s side put in arguably their best performance of the season last Saturday against second placed Taunton Titans. The men from Hazelwood were in the game throughout, but they now must build on that display if they are to start the process of overturning an eight-point deficit, which is the current gap between themselves and the safety positions.

For the second week in a row, Bury St Edmunds suffered a defeat. Jon Curry and his side were looking for a reaction against Tonbridge Juddians after a heavy loss to Rams RFC in Round Five, but they failed to respond in their clash with TJs as they slipped to successive defeats.

The Suffolk outfit will now be even more determined to hit back this Saturday when they visit Old Redcliffians. The home side currently find themselves in the bottom three after six matches and they have only picked up one victory this term. The aforementioned win came in Round Four away at London Irish Wild Geese, but Old Reds are still yet to triumph at home this term. The men from Scotland Lane did perform well against Old Albanian last Saturday, however after back to back defeats, Old Redcliffians will be keen to taste that winning feeling sooner rather than later.

Clifton take on Birmingham and Solihull at Station Road this weekend with both sides in need of a welcome victory. The hosts come into this fixture having won just one of their last five games and a defeat against newly promoted Guernsey in Round Six signalled a tough day at the office for Matt Salter’s men.

The Lavender and Blacks sit three points clear of the drop zone while Birmingham and Solihull are currently in the bottom three. The Bees did have five points deducted at the start of the term after an infringing league rules last season, but the Midlands club have shown they are more than equipped to dig themselves out of trouble. Pete Glackin’s side may have lost their last four, but they have shown periods of quality in all four of those defeats. The task for the men from Portway is to put in an 80-minute performance and they will be hoping that occurs in the West Country this weekend.