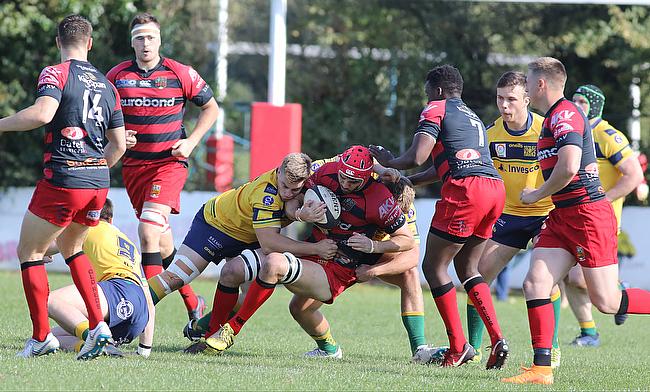 We are not even a third of the way into the new season, but for four sides towards the wrong end of National Two South, this weekend could be seen as an important one.

Currently, Birmingham and Solihull and Old Redcliffians occupy positions in the relegation zone and those two sides take on Guernsey and Barnes away from home this Saturday.

In terms of Guernsey and Barnes, they both sit above the trapdoor as things stand while London Irish Wild Geese are the other team to make up the bottom three.

With their rivals all facing one another in Round Eight, the Wild Geese come up against high flying Redruth as they go in search of their first victory of the season.

For the first time this season, Rams RFC have a little bit of breathing space between themselves and their fellow promotion candidates. Seb Reynolds’s side extended their lead at the summit of the division to four points after a commanding display against Guernsey last weekend and now they head into Round Eight in the driving seat.

After losing to Old Albanian in Round Four, the Rams have responded in the perfect manner by securing three consecutive victories and Tonbridge Juddians will be hoping for a similar reaction this weekend. TJs went into last Saturday as one of the form sides in the league, but they suffered a surprising home defeat against Barnes which would have knocked the wind out of their sails. However, Peter Dankett’s side have more than enough quality to become the first side to beat Rams RFC in their own backyard since January and a victory in Berkshire would certainly put last week’s defeat to one side.

Redruth are in excellent form heading into Round Eight. Their victory over Canterbury last weekend was their fourth win on the spin and they also moved up to second place in the table. Pale Nonu’s side have always been one of the ‘stronger’ teams in this division, but now the Reds are showing all the signs that they are ready to challenge for a top two spot this term.

While everything seems rosy for Redruth, it is the complete opposite for London Irish Wild Geese. Lee Starling’s side are currently bottom of National Two South and they have lost all seven of their matches this season. Their torrid run of results leaves them 12 points from safety and this upcoming match against a confident Redruth is not exactly the ideal fixture for a Wild Geese side struggling to find form. However, they are at Hazelwood this weekend and they will hope home advantage can have an impact as they go in search of their first victory.

Taunton Titans would have been wondering how they lost their first home game of the season last weekend. The third placed side dominated possession and territory, but slipped to a defeat against Henley Hawks at the Commsplus Stadium. The loss for Tony Yapp’s side also saw them fall out of the top two places so they will want to respond immediately when they travel to Old Albanian this Saturday.

Following relegation from National One in April, OAs have had a very patchy start to life back in National Two South. Gavin Hogg’s men enter Round Eight having won four of their first seven games with their latest result being a defeat against Dings Crusaders. The Hertfordshire club have failed to really click into gear, but on their home patch is where they have performed better this term. OAs have won three of their four matches at Woollams and they will be aiming to add to that record in Round Eight,

Henley Hawks have certainly recaptured their early season form. After back to back wins to kick off the new campaign, Nigel Dudding’s side fell to successive losses in September, but since then, the Hawks’ mojo has return. The men from Dry Leas have won their last three games and victory over Taunton Titans in Round Seven lifted them up to fourth place in the National Two South standings.

Next up for Henley is the visit of Worthing Raiders. Jody Levett’s side once again proved how good they are on their own patch last Saturday as they thrashed London Irish Wild Geese, but now the Raiders will be keen to translate their home performances into their displays on the road. Worthing, who currently sit seventh in the table, have won just once on their travels thus far so they will be aiming to double their away success rate in Oxfordshire this weekend.

Canterbury fell to their third defeat of the season in Round Seven after seeing a 10-point lead slip away from them against Redruth. The City Men went into last weekend hoping to gain a victory to add to their excellent start to the campaign, but Andy Pratt’s side were defeated despite an excellent start in Cornwall.

The Kent-outfit will now have to dust themselves down and regroup as the sixth placed side welcome Clifton to the Marine Travel Ground. Canterbury have won all three of their home matches this season, but the visitors this weekend will be looking to spoil that perfect record. Clifton picked up their second win of the campaign last Saturday as they produced a valiant display to see off Birmingham and Solihull. Matt Salter’s men went down to 14-men after receiving a red card early in the first half, but the Lavender and Blacks battled to a welcome victory which leaves them six points clear of the bottom three. Now, Clifton will be aiming for back to back triumphs as they look to move further away from the relegation zone.

It was only two defeats in a row, but Bury St Edmunds would have been delighted to return to winning ways in Round Seven after their win over Old Redcliffians. It wasn’t straightforward for the Wolfpack as they left it late to seal the win at Scotland Lane, but it will have provided a much-needed boost for Jon Curry’s men after a mini dip in form.

The Suffolk outfit are once again up against a Bristol-based side as they entertain Dings Crusaders this weekend. Dings confirmed their promotion into National Two South in April and Luke Arscott’s men have been excellent since their arrival back into the fourth tier. The Crusaders currently occupy 10th in table after four wins from their first seven matches, including a superb victory over Old Albanian last time out. What might be more important to Dings, however, is the fact that they are already eight points clear of the relegation places and victory of Bury this weekend would only enhance their positive start to the season.

After giving league leaders Rams RFC a run for their money in Round Six, Barnes completed the job last Saturday as they stunned an in-form Tonbridge Juddians side to claim just their second victory of the campaign. The newly promoted outfit had lost their previous five games following an opening day win against London Irish Wild Geese and Joe Gray’s men will now be eager to kick on.

The London-based club currently sit three points clear of the drop, but they can take a significant step away from trouble by securing a win against Old Redcliffians this weekend. Old Reds are one of the sides who occupy a position in the bottom three after securing just one win from their first seven matches. They so nearly doubled their number of victories last Saturday, but they fell to a heart-breaking defeat against Bury St Edmunds in the dying minutes of the contest. Both teams know that a win this weekend could prove very important as the season progresses so who will come out on top in the capital?

From one battle in the bottom half, to another as Guernsey welcome Birmingham and Solihull to Footes Lane on Saturday. Both sides are competing in National Two South for the first time this season and for the hosts, they have enjoyed more success thus far. Back to back wins to end September and begin October means Guernsey are three points clear of the drop at this early stage of the campaign, but they were brought back down to earth after a heavy defeat against Rams RFC in Round Seven.

MATCH REPORT: @Rams_RFC 48 Raiders 14. When the Raiders slipped to 36-0 there concern that the decision to change much of the team would backfire & the scoreline could get messy. Far from it. In fact we edged the 2nd half 14 – 12, a small consolation. https://t.co/UELYEABmbj

A trip to the league leaders was always going to be a challenge for Jordan Reynolds’s side, but they have an opportunity to secure their third victory of the season against Birmingham and Solihull. It was a chance missed for the Bees last weekend as they failed to overcome a Clifton side that was reduced to 14-men after just 15 minutes of the contest. The Midlands club are now nine points behind Guernsey as things stand, but a win on the Chanel Island this Saturday would be an ideal result for Pete Glackin’s side as they look to dig themselves out of trouble.