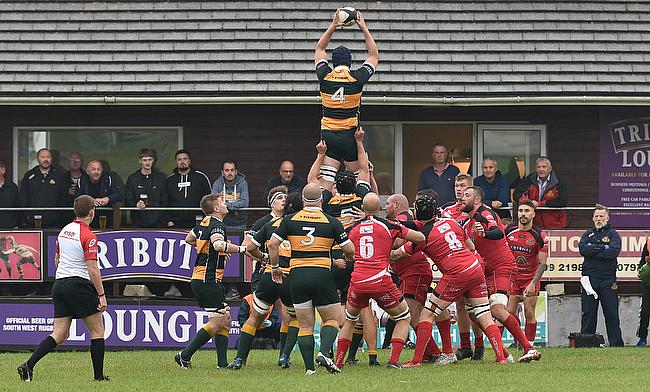 Josh Hammett’s accuracy from the tee guided Barnes to their first victory of the National Two South season whilst the top four in the division maintained their ruthless start. (Photo Credit: Jonathan Knight)

Barnes edged past Redruth to get their campaign up and running, but it was the same old story at the top as Henley Hawks, Tonbridge Juddians, Taunton Titans and Clifton continued their winning runs.

Esher made it two triumphs in a row as they surged past Dings Crusaders while elsewhere, Old Albanian comfortably beat Sutton & Epsom and Leicester Lions picked up their first away win at Westcliff.

Flanker Sam Lunnon scored a hat-trick as Henley Hawks thumped Bournemouth at Dry Leas to continue their blistering start to the season.

Lunnon claimed his first try after eight minutes, with Hawks scrum-half Ewan Fenley opening the scoring inside the first 60 seconds.

Henley cut loose after the 20-minute mark as Lunnon, Scott White and George Wood all crossed before the break.

Elliot McPun, Bradley Cook (twice), Lunnon and Alex Bradley scored in the second-half as Henley recorded yet another impressive victory.

Bournemouth’s tries came via Alan Manning and a brace from replacement Gareth Roberts as the newly promoted side felt the force of the current league leaders.

TJs had to wait until 51 minutes to pick up their bonus point with tries coming from Duncan Tout, Hugo Watson, Mark Davey and Tom Chapman.

By this stage, the hosts led 27-7 but Old Reds were next to score as a double from Matt Baker added to James Clements’ earlier try.

However, the hosts continued to press home their advantage as Watson completed his hat-trick before replacement Ryan Jackson rounded off proceedings with TJs’ seventh try of the afternoon.

Taunton Titans maintained their winning start to the National Two South season with a victory in a pulsating contest against Worthing Raiders.

The Titians led by a point at half-time thanks to tries from James Tait, Gary Kingdom and Oliver Down with Kingdom also slotting a penalty.

What a game for @tauntonrfc yesterday! The Titans’ winning start continues…https://t.co/9rt1SdRViN

Calum Waters, Kiba Richards and Jack Forrest had crossed for Worthing and it was Waters who gave the Raiders the lead after the break courtesy of his second score.

Harry Forrest and Jack Forrest then cancelled our tries from Charlie Williams and Down, but Taunton did have the final say in the last 11 minutes as Isaac Dalton went over before Tom Popham secured an enthralling win.

Clifton sealed their third win on the trot as they battled hard to earn a narrow victory over Bury St Edmunds.

The Lavender and Blacks were 15-7 in front at half-time after a brace from Sam Harrison and five points from the boot of Brad Barnes.

Barnes stretched Clifton’s lead with his second penalty after 68 minutes, but Bury set-up a tense finale as Alfie Garside touched down to add to Chris Lord’s opening score.

However, Clifton held their nerve to continue their impressive start to the campaign.

Tom James was on fine form as Esher inflicted an eight-try defeat on Dings Crusaders at Molesey Road.

The Esher winger scored a hat-trick as the recently relegated side proved too strong for Dings.

Joe Beckett, Cameron Wilkins (2), Devlin Hope and Dan Rowland crossed for the hosts as Peter Winterbottom’s side secured back to back wins.

Dings replied with Tom Anderson, Brad Doggett, Tom Hargan and Marcus Brooker tries, but this was a tough afternoon for a talented Crusaders outfit.

Sam Hurley kicked two penalties for the visitors, but the OAs led at half-time thanks to touchdowns from Morgan Thompson and Bednall, whilst Roddy Giles pinged over seven points.

OAs’ Dan Watt swapped tries with Daley Aremu at the beginning of the second period before Bednall and Hurley followed suit.

However, tries from Giles and Johnathon Wicks took the game away from Sutton & Epsom and secured the win for Old Albanian.

Leicester Lions clinched their second win on the bounce as they eventually edged past a spirited Westcliff outfit.

Tries from Devon Constant, Ed Sumpter and Kaz Henderson gave the Lions a 19-7 lead just after half-time, but Westcliff could only manage a 79th minute try from Sean Triana to secure a losing bonus-point.

Joe Vandermolen’s try had levelled the game for the hosts during the first period but despite a couple of late yellow-cards for the visitors, Leicester were able to hold on.

Josh Hammett proved to be the difference as his four penalties guided Barnes to their first victory of the campaign as they defeated Redruth.

All of Hammett’s strikes came inside the opening half an hour, but Redruth got themselves back into the game just after half-time following Connor Gilbert’s score.

Bradley Howe’s try on 58 minutes also wasn’t converted and the Reds were unable to fashion another score as Barnes came away from Cornwall with a victory for the second season running.