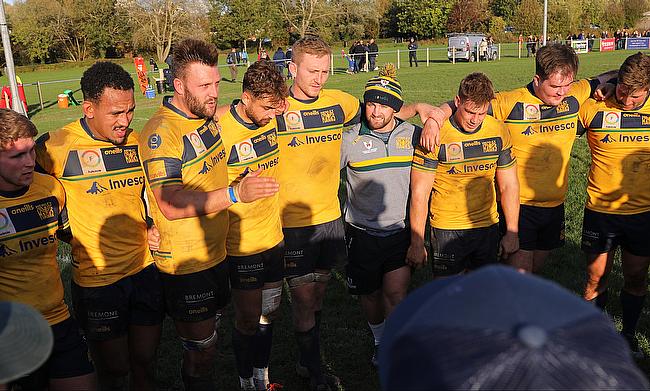 TJs had not put a foot wrong heading into Round Seven, but the Hawks inflicted a first defeat on Peter Dankert’s side for nine months to open up the race for a top two spot once again.

Taunton Titans are now level on points with Tonbridge Juddians after defeating a spirited Westcliff outfit whilst Clifton, Esher and Leicester Lions are close behind following respective victories over Bournemouth, Old Redcliffians and Dings Crusaders.

Down at the bottom, Sutton and Epsom were able to move out of the drop zone after a superb win over Barnes whilst elsewhere, Old Albanian hammered Worthing Raiders and Redruth edged past Bury St Edmunds.

Henley Hawks produced an excellent performance to inflict a first defeat of the season on league leaders Tonbridge Juddians.

Prior to this contest at the Slade, TJs had not lost a National Two South fixture since January and Peter Dankert’s side had a chance to tighten their early grip on top spot.

However, they trailed 8-7 at the break as Samir Kharbouch’s try along with Ben Bolster’s penalty cancelled out Matt Walsh’s effort.

Henley never relinquished the lead for the remainder of this encounter as Sam Lunnon and Tom Emery both scored to make it 20-10 before the hour.

Hugo Watson touched down on 68 minutes to set up a potentially nervous finale for the Hawks, but the hosts were awarded a penalty try late on which was enough to secure the victory.

Jack Arnott and Oscar Kolowski inspired Taunton Titans to victory over Westcliff as the wingers both scored two tries apiece at The Gables.

Taunton only led 21-20 at the break with Tom Wyatt, Charlie Williams and James Tait all crossing whilst an excellent first-half showing from bottom of the table Westcliff saw Sean Triana and Ewan Binneman go over.

Greg Bannister also landed 10 points for the hosts, but the visitors pressed home their advantage at the beginning of the second period as Chris Courtier and Arnott dotted down.

The spirited home side hit back via Jack Hogarth, but the final seven minutes belonged to the two Titans wings as Arnott grabbed a second before a quick-fire brace from Kolowski rubber stamped the victory.

Clifton winger Finlay Sharp scored two tries as the Lavender and Blacks kept the pressure on the top two following a victory over Bournemouth.

The visitors, who were chasing back-to-back wins, took the lead through Alex Everett-Bolter on eight minutes.

??PHOTOS – Great win at home yesturday. Brilliant to get the 5 league points to remain 3rd in the league. ????

Photos by Ian Clark. More online via our website ?? pic.twitter.com/Zzrz3LNwBN

But the home side replied with three tries before half-time as Mike Uren, Sharp and Cameron McDonald all crossed.

Sharp’s second came immediately after the interval as Clifton stretched their lead to 18 points and Bournemouth could only muster up one score in the second period.

It came with six minutes remaining as Ben Russell dotted down, but it was too little too late as Clifton extended their winning run to three matches.

Esher fought back from 19-8 down against Old Redcliffians to stay in touch with the early frontrunners in National Two South.

A penalty try and a score from Kieran Ward gave the visitors a healthy advantage heading into the break, but on the stroke of half-time, Esher responded through Matt Lowes.

Alex Kilbane crossed for Olds Reds to open up an 11-point gap shortly after the restart, however tries from Ben Davies and Sam Bullock moved Esher ahead for the first time in this contest.

The away side went back in front on the hour as Dan Fry crossed, but four minutes from the end, a converted try by Tom James and a penalty from Tristan Roberts gave Esher the win.

Leicester Lions sealed their second win on the road this season, but they had to fend off a late revival from Dings Crusaders,

The Midlands club looked to have put the game to bed having scored four tries through Ed Sumpter, Nick Cairns and Devon Constant (2), whilst Ben Young kicked three conversions and a penalty.

At that stage, they were 29-15 up, but Dings came back thanks to scores from Tom Anderson and Sam Graham to add to first-half efforts by Jordan Grattan and Jake Holcombe.

However, the Crusaders couldn’t convert their final try right at the death to snatch a share of the spoils as the Lions held on for the victory.

Conor Gracey, Joe Butler, Alex Ricci and Defeo touched down as OAs held a 28-3 lead at the interval.

A try from Tom Gwyther gave Worthing some respite at the start of the second-half, but the hosts continued to be in a ruthless mood.

Defeo grabbed his second with Tim Bond, Mike Hogan and Josh Hallett also scoring. Kiba Richards did go over for a late consolation for Worthing, but this was another chastening day at the office for the Raiders.

Fraser Honey’s 72nd-mintue penalty saw Redruth over the line as they sealed a bonus-point victory against Bury St Edmunds.

A penalty from Kodie Drury-Hawkins, plus Tom Brown’s try, opened the scoring for the visitors but Redruth followed suit with three points via the boot of Honey and an effort from Bradley Janes.

Two penalties from Drury-Hawkins, either side of Jack Oulton’s try for Redruth, gave Bury a slender half-time lead however a brace from Matt Shepherd put the Reds 29-16 in front after the interval.

Honey pinged over another three points to put Redruth in control, but Bury rallied as Dan Walsh and Matt Bursey both touched down to set-up a grandstand finale.

However, any hopes of late drama for Bury were snuffed out as not for the first time this season, the boot of Honey clinched the victory for Redruth.

Sutton & Epsom have moved out of the bottom three in National Two South after an excellent win over Barnes.

Barnes were never in front in this contest and this defeat is their fourth loss on the bounce.

Alex Hind and Josh Hammett scored their tries, with the latter also kicking 15 points but Barnes have now dropped into the relegation places.