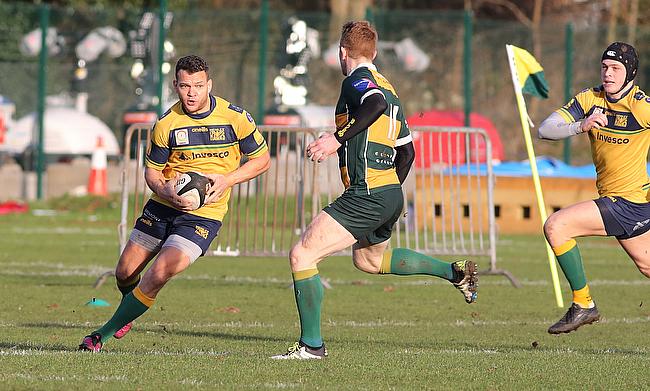 Henley Hawks have moved back into second place in National Two South after battling to a victory over Barnes.

Nigel Dudding’s side leapfrogged Canterbury, who were beaten by local rivals Tonbridge Juddians, as the race for the play-off spot continues.

Fourth-placed Taunton Titans are now only five points off Henley after defeating Redruth in Somerset while league leaders Rams RFC maintained their charge towards the title.

Seb Reynolds’ men clinched their 12th successive win as they brushed aside London Irish Wild Geese at Old Bath Road. In contrast, the Wild Geese are now 15 points from safety as are rivals Birmingham and Solihull who lost to an in-form Old Redcliffians outfit.

Seb Reynolds’ side ran in four tries in an excellent first-half display – one being a penalty try while Sean McDonnell-Roberts, Robbie Stapley and Jak Rossiter all crossed.

The Rams led 28-0 heading into the second half and increased their advantage further thanks to Jamar Richardson and another penalty try.

Wild Geese’s only points came in the final 12 minutes as George Owen scored a brace for the division’s bottom club.

Henley Hawks moved back into the top two as they beat a stubborn Barnes to continue their excellent form.

The Hawks led inside seven minutes when Scott White touched down and they doubled their advantage thanks to George Wood.

The hosts quickly replied through Robbie Martey and David Butler before taking the lead on the stroke of half-time via a Josh Hammett penalty.

However, Barnes could not add to their tally after the break as Ross Parkins put Henley back in front and on 66 minutes, Tom Emery powered over to ensure victory for Henley, who have now won 11 of their last 12 matches.

Canterbury’s top two ambitions suffered a setback as they fell to a narrow defeat against local rivals Tonbridge Juddians.

The City Men are now third after this loss and they are three points behind Henley Hawks heading into 2019.

Tries from Finlay Coxon-Smith and Charles Edwards, as well as 13 points from the boot of Will Robinson, sealed the victory for Tonbridge Juddians who are now unbeaten in eight matches.

The visitors slipped to only their fourth defeat of the season despite scores from Sean Stapleton and Dan Smart.

Andy England scored a late try to give Taunton Titans their fourth win on the spin as they beat Redruth in a Christmas cracker.

Redruth seemed set to grab a welcome win at the Commsplus Stadium thanks to a spirited second- half fightback which included tries from Richard Brown, Ben Fox and Sam Stevens.

But Taunton used their power up front to snatch the victory as England dotted down from close range.

The Titans had led this pulsating contest 30-12 just after half-time with the help of scores from Jarrad Hayler, Ratu Vakalutukali and Nick Mason, while Redruth responded through Bradley Janes and Brown.

However, despite a turnaround by the Reds, Taunton rescued the win which leaves them five points off second-placed Henley Hawks.

OAs tried to run the clock down, but they were penalised at the ruck which led to Ritchie’s late penalty and he duly converted.

A much needed and well deserved 19 points from 6 games for @BSERugby and @coachwakley with a steady climb up the table and a first home win today since September. #Wolfpack #Brothers #MerryChristmasHaberden pic.twitter.com/gvIkZOUYQc

The visitors were ahead at half-time thanks to tries from Lloyd Anderson and Alex Ricci, but only after Finlay Sharpe had opened the scoring for Bury.

Following the interval, Dave Coutts’ try put the hosts right back into this contest and the Wolfpack then found themselves ahead as Will Scholes charged over.

However, it looked as though Bury were heading to a defeat when Anderson grabbed his second score of the afternoon, but there was to be one final twist as Ritchie held his nerve to snatch the victory for Nick Wakley’s side.

Worthing Raiders ended 2018 with consecutive victories as they beat Guernsey in an amazing 12-try match at Roundstone Lane.

The visitors led for a large portion of the second half, but Worthing finished stronger to move up to seventh place in National Two South.

Layton Batiste and Lewis Hillier each scored twice for Guernsey while Douglas Horrocks and Anthony Armstrong also crossed as the away side, who are currently in the relegation places, picked up two bonus-points.

Chris Levesley’s try saw Clifton take the lead on 30 minutes, but Brad Doggett’s effort tied the game up at the break.

However, two scores soon after the interval from Rovery and Spencer opened up 10-point lead, but Dings kept in touch with their visitors as Ben Bolster landed a penalty before Harry Tovey dotted down.

With the score at 15-13, it was still anybody’s game heading into the final five minutes, but Clifton made sure they claimed the bragging rights as replacement Alex Lambert crossed to seal the win.

Old Redcliffians continued their National Two South revival with a third victory in a row after beating Birmingham and Solihull at Scotland Lane.

Dan Fry’s score put the hosts ahead after 21 minutes and a penalty from the impressive Kieran Hill increased Old Reds’ advantage.

Jack Jolly’s kick cut Old Redcliffians lead, but it was Hill who guided the home side to victory as he converted his own score and landed another penalty in the second period.

Birmingham and Solihull did score via Dan Kelly, but they were unable to secure a losing bonus-point and the Bees are now 15 points from safety while Old Reds sit 11 points clear of trouble.