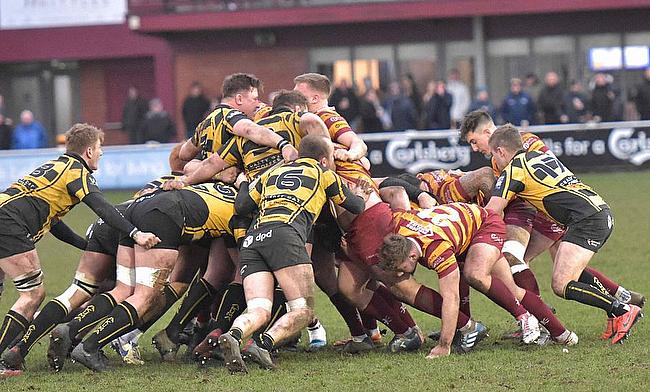 It was announced over the weekend that for a fourth year in a row, a Midlands-based team will be moving to National 2 South. (Photo Credit: Chris Farrow)

This year that team is Hinckley, who will be joining Leicester Lions in National 2 South.

Finishing third in National Two North last season, in their fourth year in the division, Hinckley have grown year on year since joining the National Leagues. Chris Campbell, the club’s Head Coach, spoke to Joe Harvey about their move to National 2 South.

“We’re quite excited by it, to be honest,” Campbell said. “We were expecting to go at the end of last season and so was everyone else, until a little-known rule ended up with Leicester Lions going. So, we had kind of started planning for it.

“When we did the maths ourselves, when the season ended, we knew it was probably going to happen. It certainly didn’t come as a surprise to us and having seen how well Lions did, and to be honest I think Lions could have done even better than the finish they got, we’re going in really optimistic.”

“There was a lot of turnover at the end of last season, both in terms of coaches and players,” Campbell said. “That took some time to embed in, probably longer than we thought it would if I’m really honest. Going into this summer now, we’re speaking to a couple of players about joining the club, but we’re not looking at a big transition.

Really exciting opportunity for all of us ⁦@Hinckley_Rugby⁩ as we join ⁦@Nat2RugbySouth⁩ for next season – new opposition, new grounds and a chance to do something special. Watch this space #n2n #n2s ⁦@nca_rugby⁩ ⁦@nat2rugbynorth⁩ https://t.co/hFVrxJk0te

“The vast majority of the squad will be returning, and we are already talking about pre-season, we are pitching that it will be a continuation from where we were, as opposed to a fresh start. So many pre-seasons feel like fresh starts and we don’t want that to happen. So, we are not going to make outrageous predictions, but we do think we are in a good place with a really good squad to be able to do something.”

One of the big things that comes with a move to National Two South is the prospect of more travel. There is 283 miles between Hinckley and Redruth and next year there is a particularly daunting weekend trip to Guernsey, however Campbell says that having looked at each journey, the extra travel doesn’t make too much of a difference to him.

“The travelling isn’t actually much more than you think it is,” Campbell said. “As a Midlands side, we’re used to going up to Tynedale, we’d have had to be going up to Blaydon next year, we’ve had all the Manchester clubs, so it’s only about 400 miles more if you take out Guernsey which is obviously a bit of an anomaly.

“It’s not too bad and we’ve got Leicester Lions with us, which is great and clubs like Henley and Old Albanian, they’re not too far away. When you do your initial look at it, you think; ‘Oh blimey, we’re going to be going here there and everywhere, but actually, it’s not as significant as you think it might be.”

Campbell, who also acts as the Head Coach of Leicestershire alongside his role with Hinckley and full-time job as Performance Sport Manager at Nottingham Trent University, says that he has leaned on Leicester Lions players for advice on what to expect next season.

“As the county coach, before everything stopped, I was speaking to some of their players anyway and one of their coaches I used to work with,” Campbell said. “They have said they didn’t find a huge amount of difference in the two leagues. They were really disappointed, I think, not to have done better.

“The two clubs get on quite well, there is a lot of mates across the clubs. I think there is going to be a lot more conversations going on, and also, we are excited about playing each other again, because that was a big loss, not having that game last season.”

You can listen to this interview with Chris Campbell on the latest episode on the NCA Rugby Podcast: