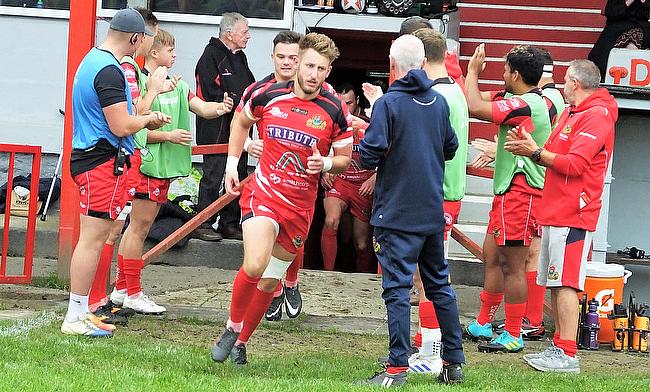 At the start of June, Fraser Honey was raising the Bill Beaumont Cup alongside his Cornwall teammates. Photo Credit: (Dan Barbary)

“It was an unforgettable day really,” Honey said. ” I was part of the campaign the week before, it was my first campaign and it was a bit of a low really. We had an inexperienced side, I got injured in a game against Devon in one of the group games and it was all very negative.

“We came out of the blocks last year against Kent to start the campaign, which rose people’s eyebrows I think. To get to the final and win it in the fashion that we did is something I will never forget. Having friends, family there, I had so much support going through that and to win put the icing on the cake really.”

Moving to the Cornish club after a spell at Plymouth Albion in National One, Honey says that the transition under Nigel Hambly has been a smooth one.

“The club itself is steeped in a lot of history and tradition,” Honey said. “The boys themselves in that changing room are fantastic and I’d played with a handful of them in the Cornwall triumph. Me and Matt Shepherd made the move down to Redruth and we’ve both bought into pushing this club forward.

“I was, obviously, at Plymouth Albion before and I had a decent year there, but I got to the stage of wanting to use this year to concentrate on my career outside of rugby and try to cement something down.”

Involved heavily with Redruth’s opening day win over Esher,  Honey played in the loss away to Taunton on the second weekend of National League action. Unavailable for the loss at home to Barnes, Honey was instrumental in the following two fixtures.

Beating both Worthing Raiders and Dings Crusaders, it was Honey’s 55m winning penalty that secured victory for Redruth, as well as winning the fly-half National Two South Player of the week.

“We came flying out of the blocks against Esher,” Honey said. “We won that game and deservedly so. We played brilliantly. We obviously thought that we were going to be all good this year, but this league is that tough and that tight, you’ve got to be on your metal every week.

“We went up to Taunton, had a fantastic first half, but went out in that second half and lost it completely and the week after, I wasn’t available for that game, but it wasn’t great either. After those two weeks (of losses) we had a lot of home truths. We addressed a lot of situations, but the main thing was that rugby-wise, we didn’t have to change much. Since then, we’ve kicked on and we’re looking a dangerous side.”

Enjoying a seventh placed finish in the 2018/19 season, Redruth finished with 69 points, some 70 points adrift from champions Rams. Honey says that Redruth don’t have any objectives for where the club want to finish this season, but will just be focusing on themselves.

“As a club and as a team, we’re trying not to get too carried away in terms of points and what we would need to keep up with a title race,” Honey said.  “I know it’s a cliche, but we are concentrating on ourselves week to week.

“If you look too far in the distance, you’re forgetting what’s in front of you. Make no bones about it, we know our capabilities, we know this club should be top three easily but, we’ve got to concentrate week on week and if we do that, the results will take care of themselves, like these wins we are picking up now.”

Last weekend, Redruth secured a hard-fought draw away to Henley Hawks, with Honey slotting more pressure kicks to keep his side in contention.  Having kicked the winning penalty against Dings a week prior, Honey says that he’ll back his own ability, no matter the distance.

“It’s like props with scrums, they get excited about that and I’m the same with kicking, I get a bit excited!” Honey said. “Straight away (against Dings Crusaders) I said that I wanted a crack. I know I can win games with my boot. I’ve had many a pressure kick in my career, but it’s making sure that you don’t overthink it.

“Fifty-five meters is a long way out, don’t get me wrong, but if you get caught up in the distance you’re going to forget about the process in front of you, which is ultimately getting a clean strike. If you trust that process, then you’ll get the rewards. Happy days.”

This weekend Redruth host Bury St Edmunds as both sides look to continue their good starts to the season.