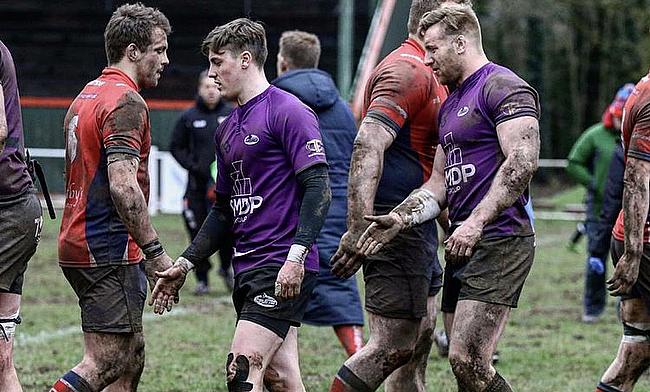 Luke Veebel believes Leicester Lions should embrace being in National Two South this season as the Midlands club prepare for a step into the unknown.(Photo Credit: Paul Best)

After 15 years of competing in the north league, the Lions have moved into the south division for this campaign which was met with apprehension when first announced.

However, chairman Ken Whitehead has expressed his excitement about the new challenge for the Lions and it is a view echoed by Veebel ahead of the opening weekend of the season.

Gareth Collins’ side begin their maiden voyage in National Two South with a trip to Tonbridge Juddians before fixtures against Old Albanian, Westcliff and Clifton.

In total, the Lions will travel approximately 536 miles in the opening month of the campaign, but Veebel feels it is just part and parcel of competing at a high level.

It is now time for our #Nat2n and #Nat2s previews. Just two days to go until the new season!https://t.co/BbxNi9bq8R

“Other people see it in different ways and they do mention the travel, but it really doesn’t matter to me. You are there to play rugby so it is as simple as that. We are lucky to be playing at this standard and that is part of the job!”

Veebel has re-joined Leicester Lions for their debut season in National Two South after a year spent at Stourbridge.

The centre has had an associated with the Lions for sevens years and one of the key reasons why he moved back to TMDP Park was due to Gareth Collins’ appointment as head coach.

The 27-year-old played alongside Collins earlier in his career and Veebel is looking forward to working with the former club captain once again.

“I enjoyed my time with Stourbridge, but I thought what do I want from my rugby now?” said Veebel.

“Actually, it was more the steer of Gaz [Gareth Collins] coming back as I was with him for three years when I first joined the club when I was 20 years-old.

“I wanted to see how Gaz was with his coaching and I also wanted to try the south league because obviously I have never tried that.”

Veebel also revealed Collins has brought a real club ethos back to Leicester Lions which he feels has had an impact on the way the team have applied themselves in pre-season.

An excellent win over Nuneaton followed by an encouraging performance in defeat against Loughborough Students has impressed Veebel.

“I think with Gaz, he knows the club,” added Veebel.

“I am not saying others before him have been bad, but with Gaz, he understands the club and understands as a player how to get the best out of a Leicester Lions team.

“What he has really done is bring that club ethos back which I saw in those three seasons working with him at Lions because it kind of petered out.

“That is not because of anyone in particular, but with new guys coming in, things do change so with Gaz coming back, he has brought back that team cohesion.

“Going off our pre-season fixtures, you can see this and it is one of the best Lions teams I have played – especially against Loughborough Students at the weekend. I know we lost 40-29, but the rugby I have seen has been phenomenal and the standard has been great. It has been nice to be back and be part of this team already.”

Despite his strong affiliation with the Lions, Veebel is not exempt from squad initiations and drinking a bottle of Lambrini on his first away trip is a task which awaits the Estonian international on Saturday evening.

On the field, Leicester Lions face a difficult challenge when they take the trip to Kent this weekend after Tonbridge Juddians finished in third place last term – just one point behind eventual play-off winners Canterbury.

However, Veebel admits he and the club are ready to get the new season underway.

He added: “It does feel like I am back at home because I was there for the past seven years before I moved to Stourbridge. I wanted to try something a bit different, but moving back, it doesn’t seem like I left!