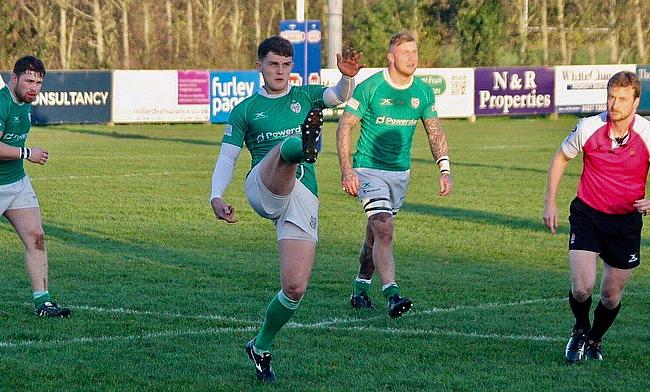 Ollie Turner believes this weekend’s clash with Birmingham and Solihull ‘can shape the rest of the season’ for London Irish Wild Geese. (Photo Credit: Nick Moore)

The fly-half/full-back admits his side aren’t treating this game any differently as both teams aim for a crucial win to enhance their survival hopes in National Two South.

As things stand, Wild Geese are 13 points adrift of safety whilst the Bees are one point better off with seven matches remaining.

“We are going into it as we would be going into any other game,” Turner said. “There is that element of a bit more pressure because we do realise this game can shape the rest of the season, but we are treating it the same.

“We know as a team that if we can get a result at Birmingham, it lets us build from there and generates some momentum.

“We are just looking at ourselves to get the result and we can go from there.”

Since gaining promotion from London and SE Premier in 2016, the Wild Geese have been involved in two relegation battles.

The men from Hazelwood still have work to do if they are to beat the drop for a third consecutive campaign, but Turner insists past experience can benefit his side.

“A lot of us who are in the side came up from London and SE Premier so from an experience point of view, we have had to face different sides of it since we have been in National Two South,” Turner said.

“We have been in this sort of position twice before now so it is nothing new to us. It has come down to these last few games and we have got to put a positive outlook on it.

“As a team, we are together. We do all gel well together and we do have the experience of been in this position.

“Until the end of the season, every week matters. It’s going to be a big run-in and we are going to give it our all.”

Over the last two seasons, Wild Geese have shown their quality to consolidate their position in National Two South and they were guided by former player Lee Starling.

However, Starling’s time as head coach came to an end earlier in the season and even though Eddie Fraher has taken over the reins, Turners admits their philosophy has remained the same.

Added to this, players/coaches such as Topsy Ojo have also offered their expertise to the Wild Geese this term as the link between London Irish and the National Two South side continues to strengthen.

?️EXCLUSIVE | London Irish's @topsy_ojo on why he believes @GeeseRugby can turn their fortunes around, his new coaching role at Hazelwood and the value of the National Leagues. #Nat2s pic.twitter.com/18P6jAqX80

Turner said: “Having played with Lee, I have got a lot of respect for him as a player and a coach. He helped me develop as a player too.

“We do still have the same values so there hasn’t been anything new. All we focus on as players is the 80 minutes on the Saturday. Anything else that happens away from that, we just embrace the change.

“Topsy has also coached us this season. It is great to have a player from London Irish, as well as an international, to learn from. The small details he gives can make that difference. All the boys look up to him and take his advice.

“As a backline player myself, he has certainly helped my game. As well as Topsy, we do have some of the academy boys too. We all bounce well off each other and for those young guys to be playing National League rugby, as well as been involved with Irish, is good for everyone.”

Wild Geese head to the Midlands this weekend and they will be aiming to secure their first away win since November.

Turner is hoping his side can match the Bees on Saturday at Portway as Wild Geese look to spark a revival into life.

“Birmingham played well against us earlier in the season,” he said. “They are a good team and we are aware of their threats so we’re looking forward to going up there.

“One of the things we have noticed is that they have got some good ball carriers, but it is up to us to go and match them and take it to them this weekend.

“Our club has a lot of history and it is great to have been part of it for the last few years. As much as we are the current players, we are representing this club as a whole.

“People have worked hard before us to get us in the position in this league so if we can stay up, it would be great for the club and it would mean a lot to us.”