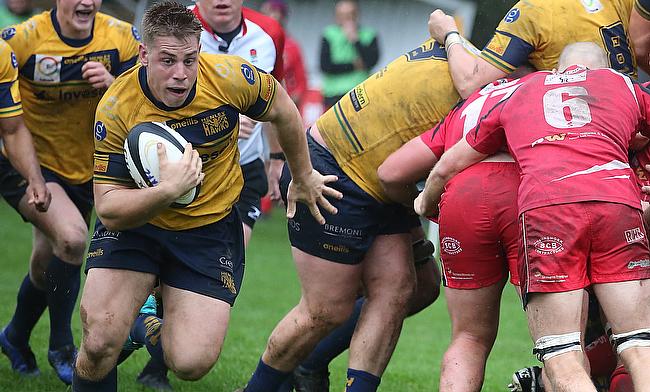 Tom Emery has been pleased by the character Henley Hawks have shown this season, insisting their resilience has contributed to a positive start to the National Two South campaign. (Photo Credit: Steve Karpa)

The Hawks had picked up maximum points from their first three games of the term, but a defeat to Taunton Titans shortly followed by a draw against Redruth signified a dip in form.

However, Nigel Dudding’s side have turned their small blip into a five-match unbeaten run and they currently occupy second place in the table.

Emery was quick to praise the determination of his side ahead of Saturday’s intriguing clash with Clifton and the forward feels Henley are in an excellent position as the first-third of the season draws to a close.

Full time here at @westcliffrugby
Well done to the home team who put up a very good fight@HenleyHawks 26@westcliffrugby 15 pic.twitter.com/mwYtUs3P47

“Maybe last season or the season before, if we had been in those situations after tough results, I don’t think we would have been able to come back and show that character in the following weeks,” said Emery.

“We were disappointed we didn’t come away with a win from Taunton. We started really slow and hadn’t, up to that point, played teams who brought the same intensity as they brought. I think we came unstuck and we took far too long to adapt.

“We also didn’t come out of Redruth with a win. We were leading the whole game and in the last 20 minutes, we let ourselves down but speaking to the boys and asking if we’d take being in this position back in week one having only lost one game and drawn one, we would have took that every day.

“We are in a really strong position. It is testament to the resilience we have built as a squad over the last couple of years and the journey we are also on.”

The next natural step for Henley on their ‘journey’ seems to be breaking into the top two of the division after coming so close last season.

The Hawks won 11 of their last 12 games to surge into play-off contention, but narrowly missed out by a single point to Canterbury.

However after accumulating 120 points, Emery admits the club ‘over-achieved’ and their brilliant 2018/19 has raised expectations at the club.

He added: “When we came into last season, we had a new coaching set-up and had some new faces as well.

“We kept a lot of core players as well who have been here for a couple of years, but I think we probably over achieved if anything last year. We didn’t really expect that.

“We set out to be a top six side and we obviously wanted to be really competitive and learn what we could, but we kind of overachieved!

“People now start asking questions around the club like ‘What do we want? Do we want to get promoted?’ We have got to aspire to play at the highest level possible because careers can be short, however, we do have to think about taking one game at a time!”

Emery joined Henley after their promotion-winning season in 2015, but the club spent just one year in National One before returning to the fourth tier.

The Hawks have slowly built their way back to challenging for a top two spot once again and Emery believes the adaptably his side have shown during the first nine games of this season emphasises the progress the club have made.

“We finished on 120 points last year so to come fourth with that many league points, does show the strength of this league,” Emery said.

“We have learnt a lot from it and we know what is required to be successful. The icing on the cake would be to win the league or be in a position where we are close to it, but it is one game at a time for us.

“Every team poses a threat and we do have to be adaptable. We do like to throw the ball around and we are probably better in fairer weather on nice dry pitches, but we have worked hard on our set piece this year and that been an area of focus for us.

“We want to apply pressure off set-piece. We have got a good kick-chase game and we are comfortable without the ball as well so it is about trying to figure out ways of breaking down different teams which means we have to be adaptable in our approach.”

Henley’s attention to detail will need to continue as they head into their Round 10 clash with Clifton this Saturday.

The Hawks are only two points behind league leaders Tonbridge Juddians, but they sit in the top two by virtue of ‘Games Drawn’ and ‘Points Difference’.

Third-placed Taunton Titans are breathing down their necks and Clifton will provide a stern test of Henley’s promotion credentials this weekend.

Matt Salter’s side are seven points behind Henley as things stand, and Emery says the Hawks are purely focused on maintaining their momentum

Emery said: “I have played Clifton a fair few times now and they are a squad which always has a good set-piece.

“They are really well drilled and coached in that area so the work that we have been doing on our own set-piece will be really important. For us, it is also about keeping the ball because we want to apply pressure on them.

“We have to be on our metal in terms of line-speed and keeping our defence tight. Every game which we are targeting, we want to try and keep the momentum going and we will experience ups and downs so it is about how we manage them going forward.”